Xbox One Gets Windows 10 Underpinnings With New Xbox One Experience

Today the New Xbox One Experience began rolling out, and with it comes a big change in not only the look and feel of the Xbox One’s Dashboard, but it also brings Windows 10 to Microsoft’s gaming console. The new update brings about a big shift in the user interface, as well as some very anticipated features.

The first thing you’ll notice is the new interface, which departs from the horizontal scrolling of the Windows 8 style interface, to something that fits more into the Windows 10 theme. In fact, the new dashboard is very similar to the Windows 10 Xbox app, including the navigation at the left, and vertical scrolling to access pinned content. Unfortunately, there is still a good 20-25% of the right side of the screen devoted to promotional items, which takes up too much of the on-screen real estate. The old dashboard would also show you the last several items that you did, which was nice since you often did things like Netflix and TV a lot. But the new experience just shows a single item other than the current active task, so you need to scroll down to find them. Luckily when you do, the items are bigger, and offer choices like Watch Live TV or Find TV. 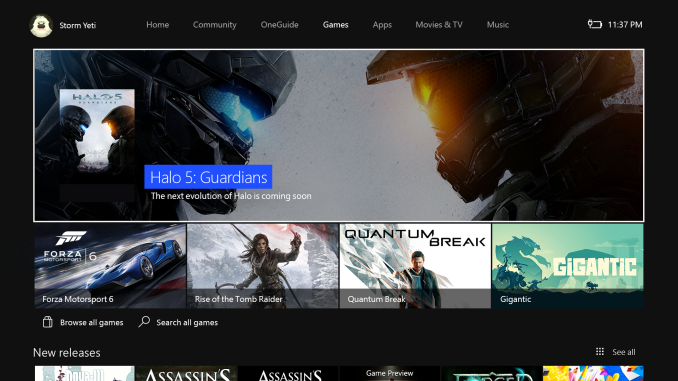 Not all is bad though. The new experience is a lot quicker for social aspects like chatting and finding groups for games. Bringing up the Xbox guide while in a game is much quicker and doesn’t slow the experience to a halt. They’ve been improving on these aspects over the last year or so since they have been one of the top items on the Feedback forum.

I’m not in love with the new UI yet, but maybe I just need some time to get used to it. I had been using the previous UI for almost two years, and I think we’re all a bit stubborn about change.

One thing that looks much better though is the new OneGuide, despite it constantly asking me to plug in my Kinect (which stopped working a couple of weeks ago). The guide comes up much quicker than the previous incarnation, and it’s been subtly chanted to make it easier to use I think. I still wish there was some way to customize the channels, since I don’t get every channel in the listing. Perhaps someone has a better way to do this, but I’ve been setting the channels I do get as favorites, and then just using favorites instead of the guide. This kind of functionality was always part of Media Center, so it’s a bit surprising it doesn’t seem to be there. The new guide will work with either cable, which can be controlled through IR blasting on the Kinect, or you can hook the Xbox up to a TV tuner if you want to cut the cord. And in case you missed it, this is all set up to add DVR capabilities next year. 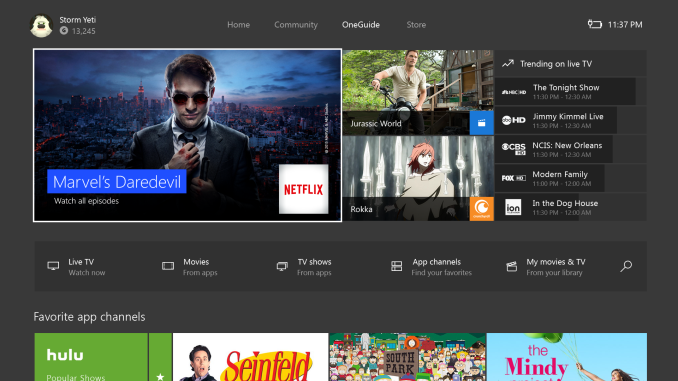 I think the big thing with today’s update though is the inclusion of backwards compatibility with Xbox 360 games. Out of the gate, Microsoft is support 104 Xbox 360 titles, with quite a few very popular games already on the list. More will be added over time. The Xbox 360 is actually running in a virtualized environment, so when you are in one of the 360 games, all of the menus and whatnot are actually the Xbox 360 menus, but you can still do things like record game clips and chat using the Xbox One interface. This was a much requested feature, and it expands the capabilities of the Xbox One, as well as the available software titles. 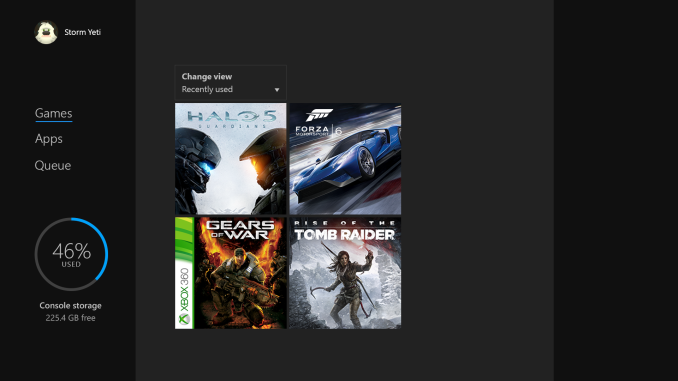 There are more features coming down the line as well. Cortana will be coming as a voice assistant, and it should help a lot over the very basic voice commands the Xbox One uses now. I’ve heard that Cortana will work with either Kinect, or with a headset, which is good since not everyone that might want to use it would own Kinect. Also, the store on Xbox One is being unified with the Windows 10 store, which will add the ability to use Universal Windows Apps tailored for the TV interface. That should open up a whole bunch of opportunities for developers for content consumption apps.

This is easily the biggest change to the Xbox One since it was launched, but over the last two years it has come a long way in terms of features and usability. Microsoft seems to be keen on keeping these updates coming too. I’ll need more time with the new experience to see whether or not I prefer it though. Change can be difficult.