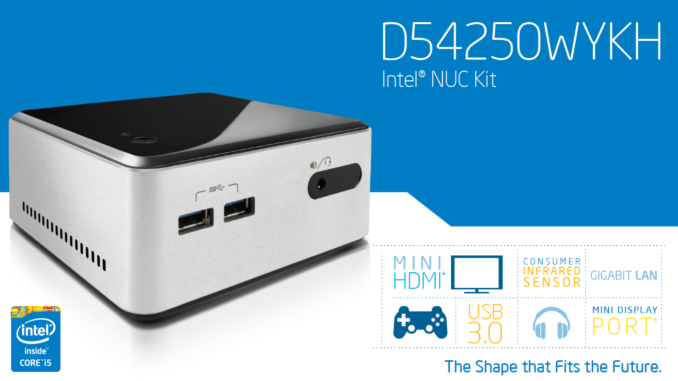 The Intel NUC category has been an interesting product line to analyze, as it provides us with insights into where the traditional casual / home use desktop market might end up. This year, we have already reviewed two different NUC systems, the Intel D54250WYK and the Logic Supply Core ML320. The Intel D54250WYKH is fundamentally the same as the D54250WYK, except for the presence of a 2.5" drive slot. Since we have already looked at the performance of the Haswell i5 NUC platform in detail, this mini review will give us a chance to comment on the chassis redesign as well as an opportunity to see what different DRAM and storage can do to performance.

In terms of external looks, the only difference between the D54250WYK and D54250WYKH are in the height of the system. Our D43250WYKH NUC kit came with an Intel SSD 530 240 GB 2.5" drive pre-installed. It could be accessed after removing the four screws holding the underside cover to the chassis.

While the Wi-Fi card (Intel AC-7260) that we saw in the D54250WYK review was present here too, we were free to choose the RAM this time around. Corsair came forward with a 8 GB Vengeance high performance DDR3L SODIMM kit capable of running at up to 1866 MHz with a CAS latency of 10 cycles. 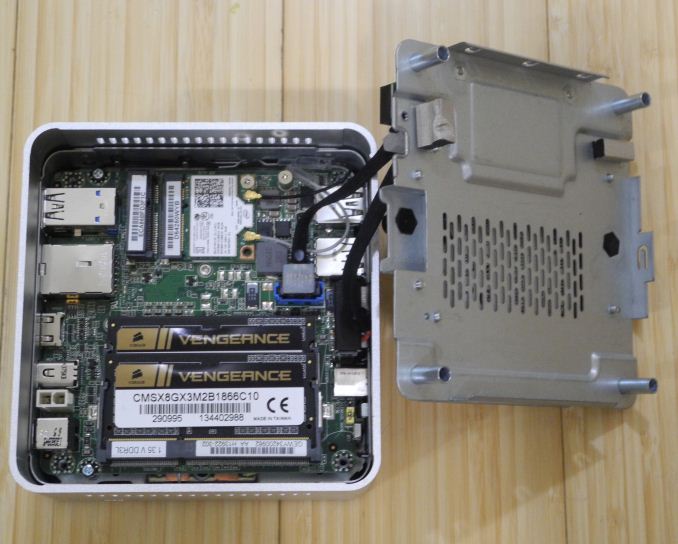 Since the performance of the i5-4250U in the NUC board is quite well known (after two reviews), one of the important aspects that we cover in this review is the chassis modification for accommodating the 2.5" drive. For comparison purposes, we use a pre-production sample of the BRIX H-series PC (this is the standard BRIX board with the chassis slightly redesigned to accept 2.5" drives up to 9mm in height. The internal layout of the support for the 2.5" drive in both the versions is visible in the picture below. 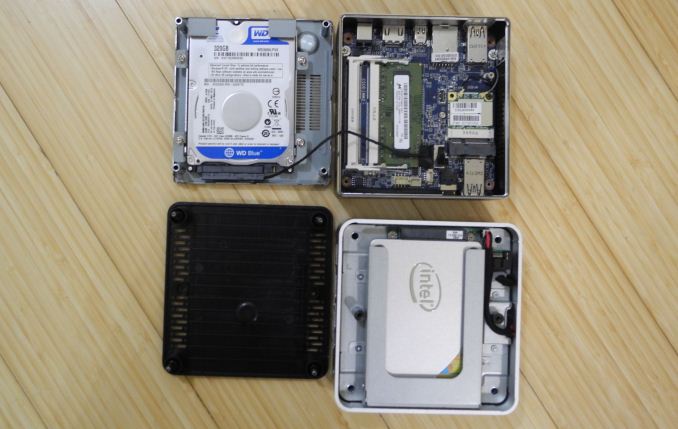 While Gigabyte has opted to mount the drive bay flush against the chassis lid, Intel has a metal contraption on top of the motherboard in which the drive bay is integrated. The gallery below gives a closer look at both the designs. The first three pictures show the BRIX H design where the SATA data and power pins are brought out from the board to interface with a thin horizontal connector cable. This type of cable used to be popular during the netbook era (and even now, in notebooks such as the Razer Blade Pro). At the other end of the connector cable, we have a breakout into the standard SATA data and power connector for interfacing with the disk drive (as shown in the top segment of the photograph above).

The last three photographs in the gallery above show the Intel approach. Since the NUC board has separate SATA data ports and power connectors on the motherboard, Intel is unable to provide a clean solution to the problem of interfacing with the 2.5" drive. In the first of the Intel NUC photos in the gallery above, we have the power connector on the top metal layer visible. We can follow this to the SATA power connector on the main board by unscrewing the metal layer. This also provides us with a look at the SATA data cable which connects to a similar slot on the metal layer. All these results in the height of the chassis being more for the D54250WYKH compared to the BRIX H model. It is also not a surprise that disassembling the BRIX H to install a new drive / mSATA SSD / RAM is much easier than doing the same on the NUC chassis with the 2.5" drive slot.

In the rest of this review, we will have a few sections presenting various benchmark results (including wireless and storage system evaluation numbers). A section on power consumption and thermal performance precedes the concluding remarks. However, prior to all that, we have a table presenting the details of various systems that are compared against the D54250WYKH in this review.