Last week we published our AMD Thunderbird/Duron Investigation & Overclocking Discussion and basically revealed that the FIC AZ-11, with a few modifications, has the ability to adjust the clock multiplier of Socket-A processors, final shipping “retail” CPUs as well as the engineering samples that we reviewed not too long ago. 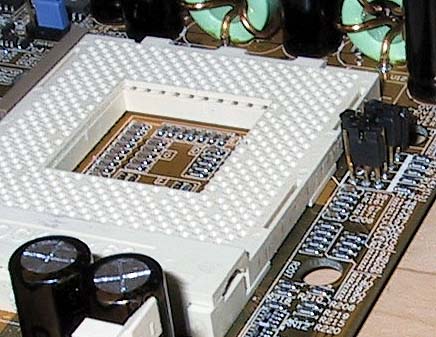 Our home-made OVERRIDE pins on the FIC AZ-11

Because of this we concluded that there was some other factor limiting us from increasing the clock multiplier, most likely the CPU itself.  Shortly after publishing the investigation we received a few retail CPUs that we also tried in our modified FIC AZ-11.  The results were identical to the experience we had with our “engineering samples” in that using the ‘FID’ jumpers we soldered onto the AZ-11 would only allow us to underclock our CPUs but not increase their clock multiplier above what they were shipped at.  Increasing the clock multiplier beyond their shipped state would result in the system not booting, which turned out to be a hint as to exactly what was going on.