Yesterday evening I met up with HTC, who let me take a quick look at a number of their upcoming unreleased phones, including the HTC Sensation 4G and HTC EVO 3D. Naturally, the first thing I did was sit down and run a couple of benchmarks during our limited time with the phones, and get an overall feel for the devices. I also spent some time with the HTC ChaCha and HTC Salsa - the two Facebook phones - though my focus was more look and feel for the form factor of the ChaCha given the fact that both are just MSM7x30. 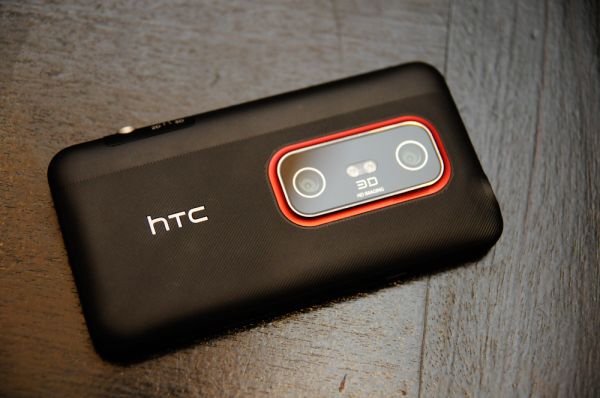 First up is the HTC EVO 3D, which is the as of yet unreleased 3D phone with WiMAX support destined for Sprint. WiMAX is provided by the same SQN1210 we've seen used in other HTC WiMAX phones. On the back are two immediately apparent 5 MP cameras for stereoscopic capture, and two LEDs for illumination. I didn't measure exactly how far apart the cameras are, but it appears comparable to the separation I saw with the LG Optimus 3D back at MWC. 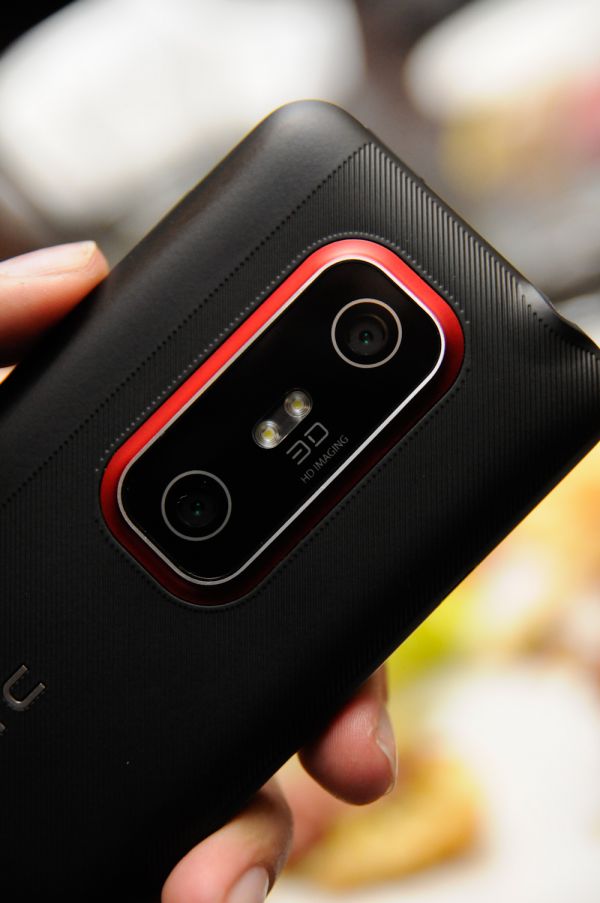 Unlike the Sensation, the back of the EVO 3D is a plastic material that's lightly soft touch. It actually feels good in the hand thanks to the ridges that run diagonally across the lower three-fourths of the device. HTC's industrial design for the back of the EVO 3D also continues the blood-red theme that started back with the original EVO and Incredible. Underneath the battery cover however it's black however, no more bright red. The EVO 3D has a very large 6.57 Whr battery, one of the largest (if not the largest) I've seen in a smartphone to date. 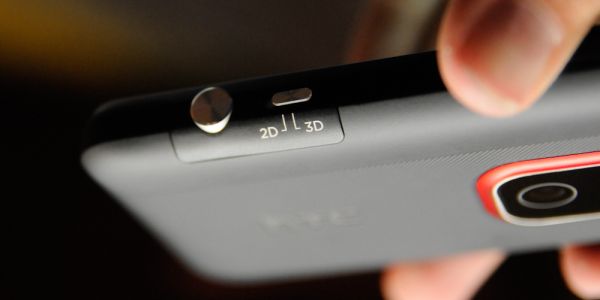 On the side of the EVO 3D is the 2D/3D toggle switch and shutter button, which is the largest and most pronounced I've seen so far. It's readily locatable and has great click. Like most other phones with camera buttons, the EVO 3D's is a two-step button.

The front capacitive buttons are relatively standard fare and match what we've seen on the previous EVO brand smartphones. The EVO 3D and Sensation are both topped with a brilliant Super LCD (IPS) qHD 960x540 LCD display. While I didn't have any of my display analysis tools with me, at first glance viewing angles seemed very good, as did overall contrast. I'm still a fan of the good 'ol RGB stripe present in LCDs, and unlike other qHD LCD displays (like in the Atrix and Droid X2), the Sensation and EVO 3D both are free of Pentile. I think they look brilliant, and even though I'm still skeptical about qHD until it's officially added to the Android supported resolution table, I was pleased with the increased resolution available when browsing web pages. 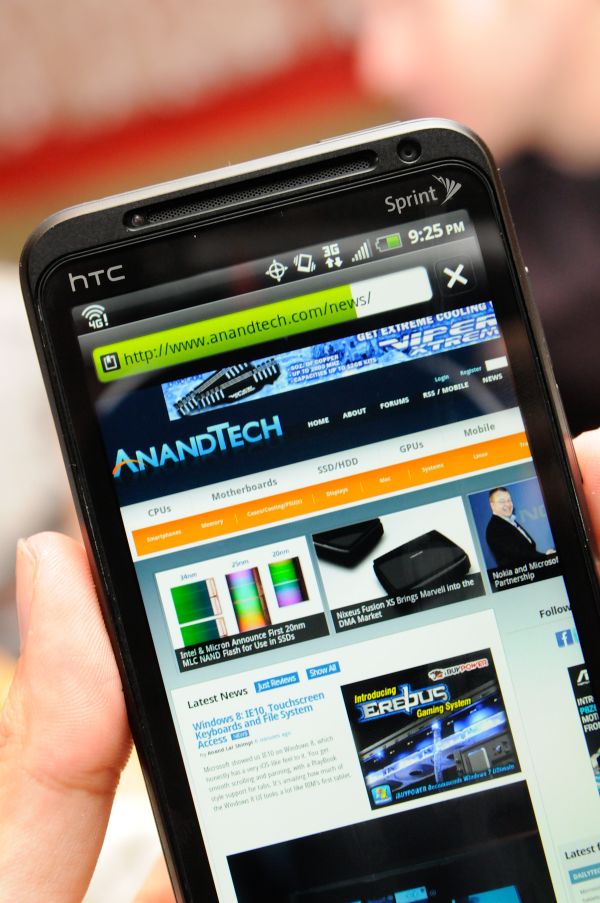 The EVO 3D also includes an autostereoscopic display (glasses-free 3D) achieved through the use of a parallax barrier. There was Green Hornet preloaded in 3D, along with a few games that I didn't get a chance to launch, and the camera application. Inside the camera, it's essentially the same fare as what I saw with the LG Optimus 3D - you get a live 3D preview when you're shooting stills or video in 3D. You can shoot 2D video in 720P H.264, or 3D video which squeezes the left and right frame into one 1280x720 frame, effectively giving you 720P 3D video with half the horizontal resolution. You lose half the horizontal resolution using the parallax barrier anyhow, so what you see is truly what you get.

I found the EVO 3D's display a bit more challenging to align my head with and keep in an optimal location for viewing 3D than I remember the LG Optimus 3D being. In addition, I did notice a bit of ghosting. That said the underlying technology is the same as what virtually all the commercially available "glasses-free" 3D implementations are presently.

The EVO's obvious sibling is the HTC Sensation, which trades the 3D display and dual camera setup for some truly awesome industrial design. I've been salivating over the Sensation for a while now after first seeing pictures and renders of it, and in person it doesn't disappoint one bit, this is the clear new flagship device for HTC. 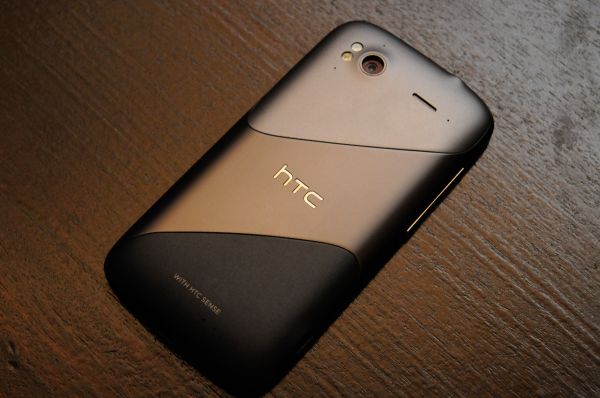 The Sensation is a unibody design, meaning the entire case of the phone is one solid piece. The top and bottom (silver and black in the photo) regions are plastic, but serve as RF windows for the antennas that are printed on the inside. One continuous metal structure runs around the entire edge, and onto the front of the display as well, and necessitates a rather unique strategy to hold the phone together. Press on a tab at the bottom of the phone, and the whole back case slides upwards off of the phone. As a result of the unibody construction, the Sensation has an awesome in-hand feel that's notably solid. 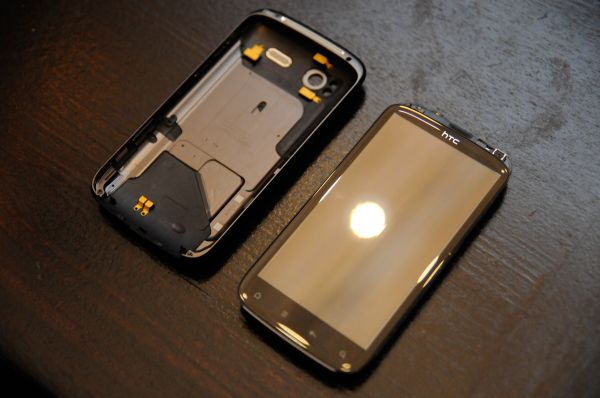 The front is again the same 4.3" Super LCD in the EVO 3D, just minus the parallax barrier that sits atop it. There's a slightly convex shape to the display, with a gentle curvature at the edges on all four sides. HTC has also slightly changed the Android button logos - they're more modern and minimalist now. Button order seems to have settled down, and remains the same as the Desire HD/Inspire 4G. 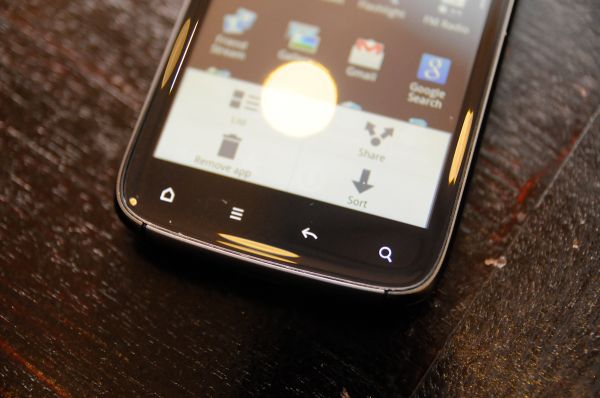 The Sensation also trades the dual 5 MP camera system for one 8 MP camera. Rumor has it that image quality on the Sensation is another step better than the 8 MP camera systems from the Inspire 4G/Desire HD due to both improvements in Qualcomm's ISP from MSM8x55 to MSM8x60, and some more software enhancements in the camera application and drivers by HTC. I didn't get to transfer any photos or videos off the device, but we'll find out soon enough. The Sensation's battery is 5.62 Whr which is notably smaller than the EVO 3D's. I was told by LG back at MWC that their own parallax barrier consumes on the order of single digit mA of current, and that in general at this size all do, so we'll see if the reason for the EVO 3D's larger battery is WiMAX soon enough.

The Sensation looks like a serious contender and will do some serious dual-core battle with the G2x when it arrives on T-Mobile stateside.

Both the EVO 3D and Sensation also have the new HTC Sense, including glanceable lock screen, new animations, and a number of other enhancements. I have to say that it's nice to see HTC finally building information into the lock screens, and it looks good. 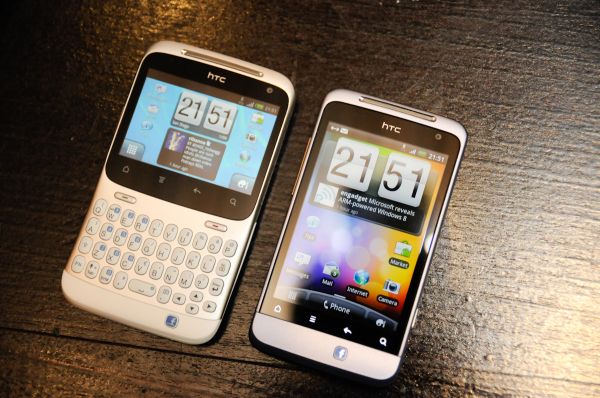 Last but not least are the HTC ChaCha and Salsa, the two Facebook phones. I didn't spend as much time with these two other than to quickly take some pictures and play with the ChaCha's keyboard, which makes it the more interesting of the two. The keys on the ChaCha are super clicky and have excellent communication. I'm intrigued by this form factor and wonder if HTC will try and make a more flagship Android device with keys on the front, sort of like their own attempt at BlackBerry form factor, similar to the Droid Pro. In my limited time with the ChaCha, I was impressed by the bend separating the keyboard region from the display, and the display dot pitch.

Both the HTC ChaCha and Salsa are based on MSM7x30.