Prior to looking at the usage characteristics of the various drives, it is helpful to compare their specifications and also take a look at the internals. All the 1GBps-class drives discussed in this review adopt the strategy of placing a NVMe SSD controller behind a USB 3.2 Gen 2 bridge chip.

The ADATA SE800 is the lightest of the lot, coming in at 40g, compared to the 95g of the SE760 model (which integrates a separate M.2 SSD). The HP P700 is similar to the ADATA SE800, Lexar SL100 Pro, and the Samsung T7 Touch in integrating the flash, SSD controller, and the USB bridge on the same board. This enables the HP P700 to come in at 58g, similar to that of the Samsung T7 Touch. The ADATA SE800 uses an InnoGrit IG5208 SSD controller behind the ASMedia ASM2362 bridge. The HP P700 and ADATA SE760 both use the JMicron JM583 bridge, though the controllers are different - a rebranded Silicon Motion SM2263EN for the former and the Realtek RTS5763DL for the latter. The cable lengths for all the new SSDs being covered today are the same - 20cm. Interestingly, HP provides a Type-C to Type-A cable, and a Type-C to Type-A adaptor, while the usual trend is to pack a single Type-C to Type-C cable and a Type-C to Type-A adaptor. The ADATA SE800 stands out for its ruggedness with an IP68 rating. Other than the SanDisk Extreme Pro with its IP55 rating, none of the other SSDs in the above list claim any sort of ingress protection.

The ADATA SC680 is the lightest, coming in at 25g. The HP P500 and P600 both have a more sturdy look and feel. The cables are similar to the ones supplied with the vendor's 1GBps-class drives. The key aspect in the above table is the absence of S.M.A.R.T passthrough, TRIM support, and UASP support in the USB flash controller-based HP Portable SSD P500.

Additional details for each of the devices above, along with teardown photographs, are available in the sub-sections below.

The differentiating aspect of the ADATA SE800 is its IP68 rating and MIL-STD-810G - 516.6 shock-proofing certification. ADATA has reused the case design from the SE730 (2016 family) for the SE800. The gallery below presents some of the teardown pictures of the SE800.

There are four flash packages (two on either side) on the board. The InnoGrit 5208 (Shasta) is a PCIe 3.0 x2 DRAM-less SSD controller, and it interfaces with the flash packages on one side and an ASMedia ASM2362 USB 3.1 Gen 2 bridge on the other side. ADATA claims speeds of up to 1000 MBps for the SE800. 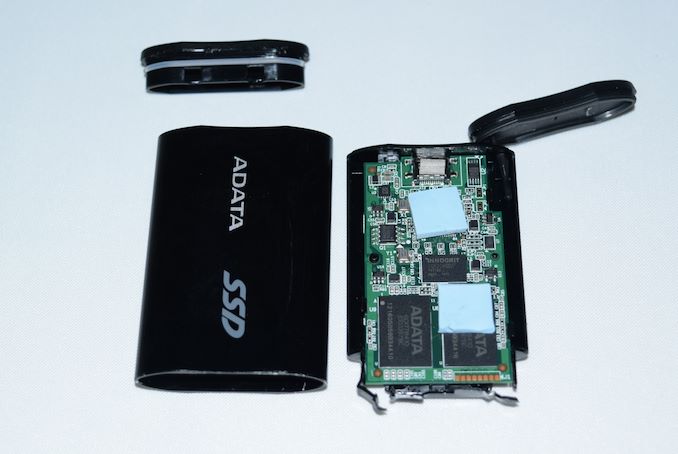 The internals also show two haphazardly placed thermal pads - one atop the ASMedia bridge, and another on one side of one of the ADATA flash packages. As we shall see further down, the thermal behavior of the internal board leaves a lot to be desired.

ADATA introduced the SE760 a few months after the launch of the SE800. It is a run of the mill USB 3.2 Gen 2 NVMe SSD, using separate boards for the bridge chip and the SSD, with the latter being a standard M.2 2280 NVMe SSD. The XPG SX6000 Lite used in the SE760 is a DRAM-less entry-level SSD. Unlike the SE800, the SE760 doesn't have any ingress protection, but the industrial design is sleek and attractive. The gallery below presents some of the teardown pictures of the SE760.

There are four Micron flash packages on the SX6000 Lite along with the Realtek RTS5763DL SSD controller. board. The controller is a mainstream DRAM-less offering from Realtek. The SSD interfaces with a JMicron JMS583 bridge on the main board. ADATA claims speeds of up to 1000 MBps for the SE760. 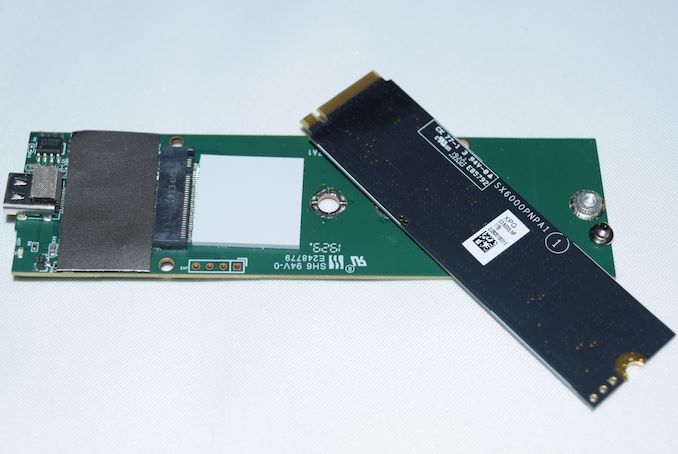 The internals show a single thermal pad on the main board. Interestingly, the only pad interfaces with empty areas of the PCB on both the main as well as the SSD gum-stick. It is evident that the thermal solution is at the wrong place, and as we shall see further down, the temperature of the board components are not pleasant when the device is subject to stressful traffic.

The SC680 is ADATA's entry level offering in the external SSD market. The slimness and lightweight nature are touted by ADATA as selling points for the drive. It integrates a SATA SSD and a USB bridge on a single PCB. The gallery below presents some of the teardown pictures of the SC680.

There are four flash packages (two on each side of the board). The controller used is the DRAM-less Silicon Motion SM2259XT, with the JMicron JMS580 doing the bridge duties. ADATA claims speeds of up to 530 MBps for the SC680. 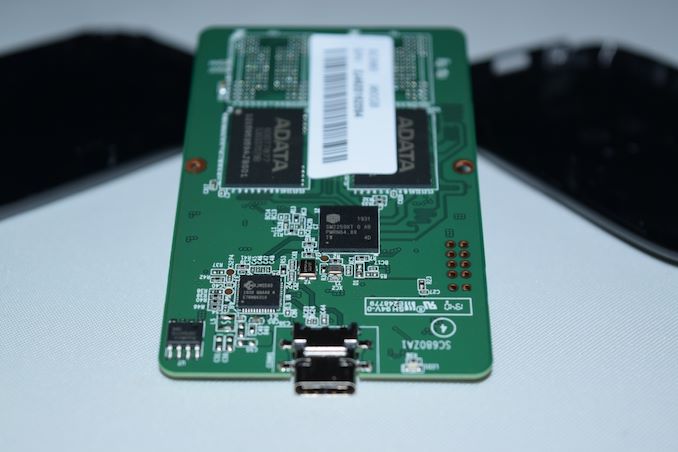 There is no thermal solution to speak of, and the performance profile of the device leads us to believe that one might not be strictly necessary. The plastic casing ensures that any generated heat doesn't really surprise the user while handling the device.

The P700 is HP's flagship offering in the USB external storage space. The uniqueness of the P700 (as well as the P600 discussed below) lies in its cable management design. A magnetic casing (with dimensions similar to that of the main drive) is supplied to store the cable and adaptor along with the drive itself. It is strong enough for carrying around both the drive and the cable casing together, while also being easy enough to separate for actual usage. The other interesting aspect is the adaptor - while vendors have typically provided Type-C to Type-C cables, along with a Type-C to Type-A adaptor (most Type-C to Type-A adaptors are not legitimate as per USB-IF specifications), HP supplies a Type-C to Type-A cable, along with a Type-A to Type-C adaptor. The P700 integrates a NVMe SSD and a USB bridge on a single PCB. The gallery below presents some of the teardown pictures of the P700.

There are two flash packages, Micron-branded DRAM, and a HP H8098 (re-branded Silicon Motion controller) on one side of the board. The other side is practically empty (with the blank flash package slots potentially being used in higher-capacity versions).The JMicron JMS583 performs the bridging duties. HP claims speeds of up to 1000 MBps for the P700. 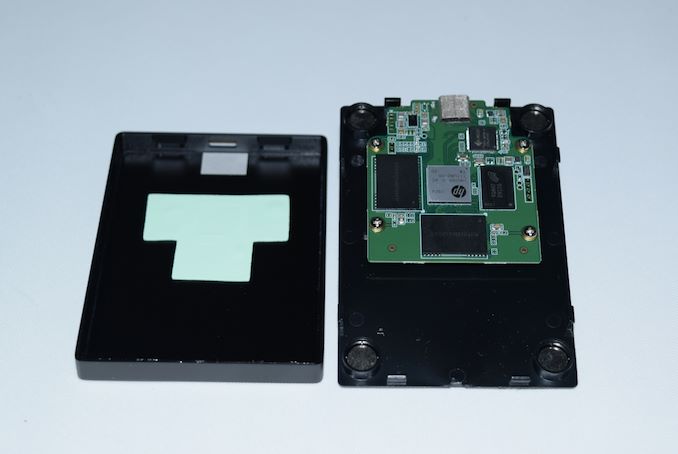 A thermal pad is affixed to the inner side of the metal casing and interfaces with the flash packages as well as the SSD controller. Based on this thermal solution, we do not expect any surprises in our thermal stress tests described further down.

The P600 targets the same market segment as that of the ADATA SC680. Similar to the SC680, it also adopts a single-PCB design for a DRAM-less SATA SSD behind a USB bridge. In terms of external appearance, it is quite similar to the P700 as can be seen from the teardown pictures below.

There are four flash packages on one side of the board. The controller used is the DRAM-less HP H6158 (re-branded Silicon Motion SM2259XT, in all likelihood), with the JMicron JMS580 doing the bridge duties. HP claims speeds of up to 560 MBps for the P600. 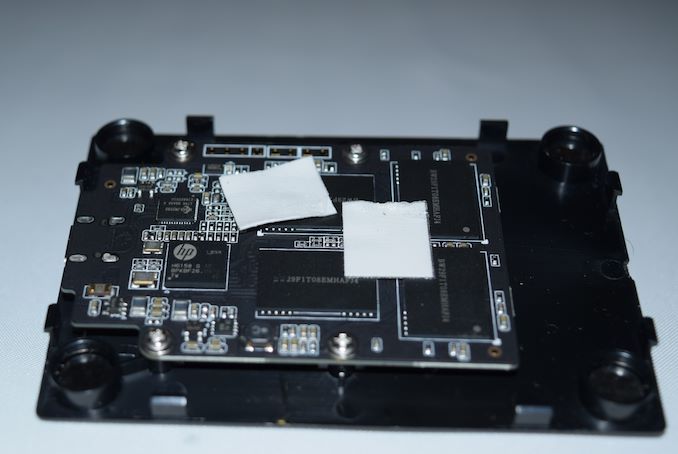 There are two strategically placed thermal pads attempting to cover all flash packages as well as the SSD controller. At first glance, considering the performance profile of the device, this looks acceptable. Nevertheless, the real-world performance of this thermal solution is worthy of the additional investigation reported in a later section.

The P500 is an entry-level portable SSD with an industrial design reminiscent of the Samsung T1 from 2015. It doesn't come with magnetic cable-holder, but the cable/adaptor combination supplied alongwith is the same as the ones for the P600 and P700. The internal reveal a single-PCB design with a USB flash controller and a separate and a Type-C switch. The gallery below presents some of the teardown pictures for the P500.

There are four flash packages on one side of the board. The controller used is the HP H3808 (re-branded Silicon Motion SM3280), with the EtronTech EJ179V for implementing the Type-C support. HP claims speeds of up to 370 MBps for the P500. 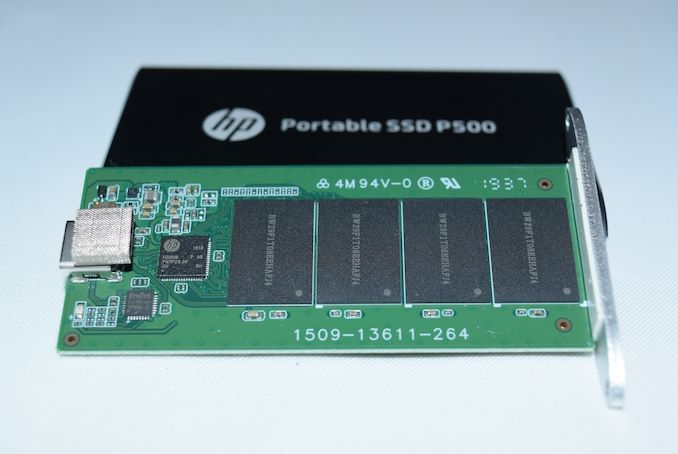 There is no thermal solution necessary for this performance profile. The usage of a USB flash controller also precludes the collection of interesting device characteristics during the course of usage. It is interesting to see HP utilize a USB flash drive controller in a device marketed as a portable SSD.