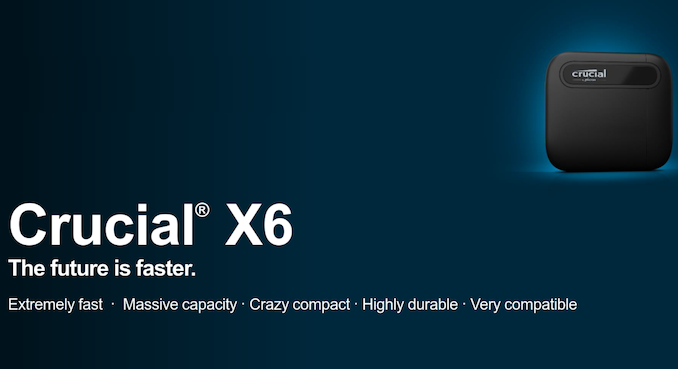 Crucial introduced their first bus-powered direct-attached storage product last year - the X8 Portable SSD. The product put their P1 NVMe SSD behind an ASMedia bridge to offer read speeds of up to 1050 MBps. Only 500GB and 1TB capacities were launched. This refresh season sees a 2TB model being introduced in the X8 line. This is in addition to a new product that sacrifices the internal NVMe SSD for a SATA drive while retaining the USB 3.1 Gen 2 (10 Gbps) interface. This new product - the X6 Portable SSD - will be available in 1TB and 2TB capacities, with read speeds of up to 540 MBps.

Crucial doesn't publicly state the type of NAND (QLC/TLC) inside either the X6 or X8. However, Crucial did officially confirm that their focus is on using the right type of NAND for the right consumer application. Quoting them verbatim: "The Crucial X6 is being positioned toward read-intensive workloads, and true-consumer applications. The product does not target high-end-content-creators who may benefit from TLC-memory characteristics."

One doesn't need to even read between the lines to determine that the X6 uses a QLC SSD internally. The X8 being based on P1 (Crucial's first-generation QLC-based NVMe SSD) is also common knowledge. The company recently updated their BX500 entry-level SATA SSDs with 1TB and 2TB models. Eagle eyes might note that the lower capacities are 120GB, 240GB, and 480GB, while the older 960GB model has now been replaced with the 1TB version. Given that the BX500 initially launched with 64L 3D TLC, it makes sense that the 1TB and 2TB versions are 96L QLC drives. Based on the advertised bandwidth numbers, it is also very likely that the X6 Portable SSD internally uses the new BX500 QLC models.

Crucial touts the compact and lightweight nature (around 37g) as an attractive aspect for consumers. In order to cater to the budget-conscious, Crucial is keeping the package contents to the bare minimum - just the drive and a Type-C to Type-C cable. The Type-C to Type-A adapter is an additional part that costs around $10 more than the base package. The table below presents the pricing of the new products from Crucial, and a comparison with equivalent capacity offerings from Western Digital / SanDisk, and Samsung.

We reviewed the 1TB X8 Portable SSD earlier this year, and found that the drive significantly undercut the competition in terms of pricing. Since then, the competitors' offerings have become cheaper. The trade-off between 3D TLC performance characteristics and QLC pricing becomes more of a challenge that has to be considered on a case-by-case basis. For the new products, despite the separation of the Type-C to Type-A adapter from the main package, the pricing gap has become quite narrow. As the above table shows, it is not even in favor of the QLC SSDs for certain capacity / performance points. Crucial will need to rethink pricing given the current state of the market.