Today is the next stage of the AMD AM4 B550 motherboard rollout: numerous vendors have started listing its models in place of an expected launch on June 16th. One big feature of B550 that B450 didn't have in the specifications was PCIe 4.0 support, and so this will be a big uplift with the new motherboards. Vendors today are unveiling the more price conscious models when directly compared to the premium X570 models.

The B550 chipset has been touted for many months, with much speculation on feature set, compatibility, and which AMD Ryzen processors users will opt to go for when pairing up a new board. One prevalent issue which AMD has addressed recently is that its impending Zen 3 and Ryzen 4000 processors will now be supported on B450 and X470, albeit without the benefits of PCIe 4.0 and its increased bandwidth. With this in mind, one of the main advantages of the new B550 chipset is that it will openly support PCIe 4.0 and Zen 3, which gives users more affordable options when it comes to selecting a new PC, whether it is a budget gaming system or an AMD Ryzen 3950X 16-core laden powerhouse.

AMD recently announced its Ryzen 3 3000 series processors, the Ryzen 3 3300X and Ryzen 3 3100 which we reviewed. Users looking to buy a new motherboard for AMD's more affordable Ryzen 5 and Ryzen 3 processors may not want to spend the big bucks some vendors are asking for some of its X570 models. Enter B550, and with over 50 models across all the prominent vendors to choose from, it's likely a user will be able to find one that not only matches their style requirements but matches what they need from a feature set as well.

The biggest benefit going to B550 from B450 is official support for PCIe 4.0 devices within the full-length PCIe slot which is driven by the processor. This means that the top full-length slot will run at PCIe 4.0 x16, with some models allowing for x8/x8 from a second full-length slot with official support for NVIDIA SLI. From the CPU support pages that we've seen announced from vendors, B550 will only be compatible with AMD's Ryzen 3000 series processors. For users looking to use PCIe 4.0 storage devices, B550 models include a single PCIe 4.0 x4 M.2 slot, with any additional M.2 slots coming via PCIe 3.0 lanes from within the chipset itself.

Another benefit is the B550 chipset includes support for up to two USB 3.1 G2 ports which B450 didn't offer. B550 also retains the same capability in regards to USB 3.1 G1 support as B450 with up to six ports available from the chipset. Users can also install up to six SATA ports from the chipset, with the onus on vendors if they want to use additional re-drivers or SATA controllers to push the numbers further at the cost of PCH lanes. Some models leverage Realtek's ALC1220 on the more premium B550 models, with the ALC1200 featured on MSI's MAG B550 Tomahawk. 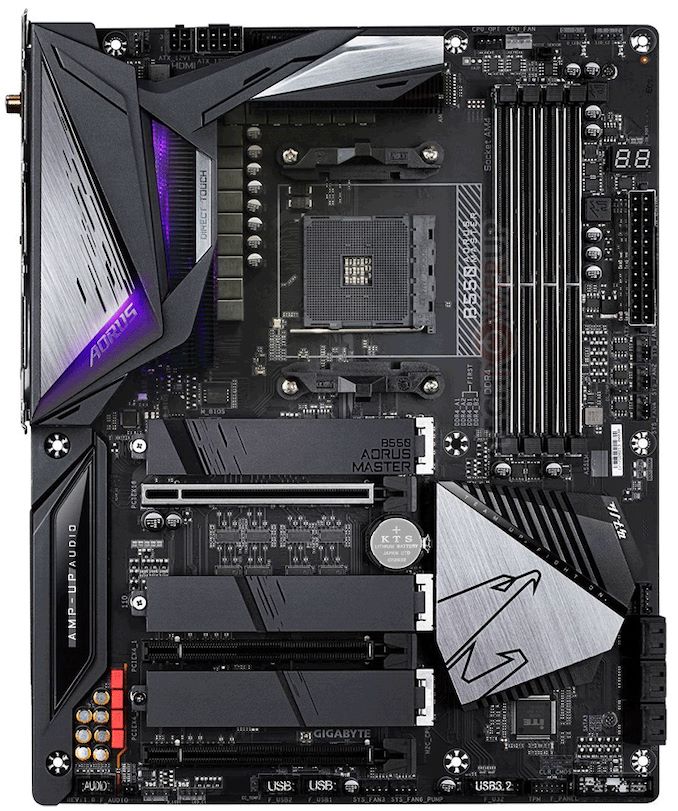 The GIGABYTE B550 Aorus Master motherboard

Motherboard vendors across the world have been enabling their public listings of the B550 product stacks online, with some notable models from GIGABYTE which include the B550 Aorus Pro AC which provides for one PCIe 4.0 x4 M.2 slot, an additional PCIe 3.0 x4 slot which is driven from the chipset and includes an Intel Wi-Fi 3168 wireless interface which is Wi-Fi 5 standard. ASUS has also announced its stack with the top model, the ROG Strix B550-E Gaming offering an Intel I225-V 2.5 G Ethernet controller, with three full-length slots offering x16, and x8/x8 for NVIDIA SLI multi-graphics configurations, with the third full-length slot operating at PCIe 3.0 x4. 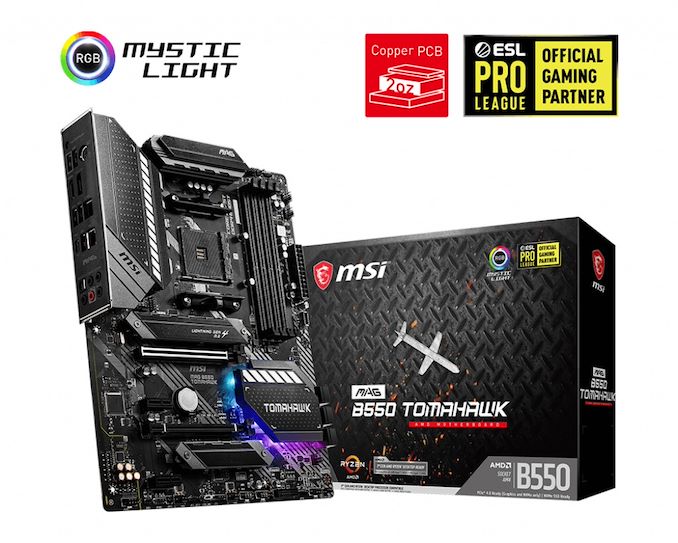 MSI has also dropped its B550 stack publically, with the popular Tomahawk series appearing via the B550 Tomahawk has also been announced with support for up to DDR4-4866 memory, a full-length PCIe 4.0 x16 slot with a secondary full-length PCIe 3.0 x4 slot, with two PCIe 3.0 x1 slots. Users looking for small form factor models will find at least three mini-ITX models, with the most prominent model coming from ASUS via the ROG Strix B550-I with Intel's I225-V 2.5 G Ethernet onboard. There are also plenty of micro-ATX models with five from ASUS alone expected at launch, although some models may be region dependent.

In regards to the pricing on AMD's B550 models, only ASUS so far has announced any pricing, with prices starting at $134 for the ASUS Prime B550M-A, all the way up to $279 for the ASUS ROG Strix B550-E Gaming which has an Intel's AX200 Wi-Fi 6 wireless interface, an Intel I225-V 2.5 G Ethernet controller, and a SupremeFX S1220A HD audio codec. We expect more pricing to be available in the coming days and weeks.