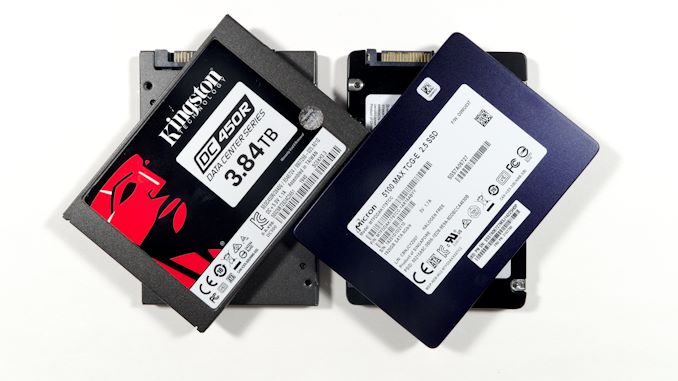 Every now and again we need to develop updated benchmarks to match the current workloads in the market. Today we're launching our updated 2020 Enterprise SSD test suite, and in order top draw comparisons of new to old, we're taking a look at two SATA SSDs that have almost nothing in common. From Kingston, we have their latest entry-level offering that stretches the definition of an enterprise SSD in pursuit of affordability. At the other end of the spectrum, we have the Micron 5100 MAX, a top of the line flagship model from two generations ago; old but not necessarily obsolete. We also have other drives in the mix, tested on the new suite, however these two are our main focus. 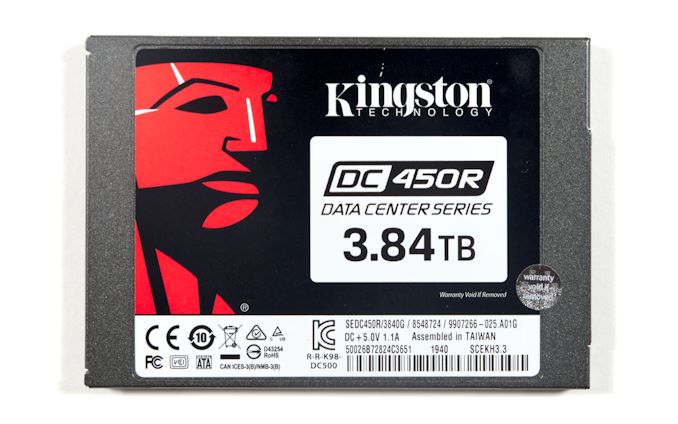 The Kingston DC450R is part of a burgeoning market segment for entry-level server SSDs that compromise on one or more key features that traditionally define enterprise SSDs. Entry-level drives always tend to have endurance ratings and overprovisioning ratios comparable to consumer SSDs. That's certainly true of the DC450R, but it also eschews power loss protection capacitors. For many traditional server use cases, such as transactional databases, that would immediately disqualify the DC450R. But many of the most read-oriented workloads do not particularly need the extra data integrity assurances that power-loss capacitors provide - these use cases are fine with relying just on a accessing a filesystem (that likely has redundancy regardless). Content Delivery Network (CDN) servers are the best example of this: they only need to mirror content distributed from a central source, and there are no serious consequences if a single CDN node goes down—but they still can benefit from SSD performance.

The Kingston DC450R is a clear derivative of the DC500 series. We're looking at the same basic PCB layout, but now with empty pads where the DC500s have power loss protection capacitors. Our 3.84TB DC450R sample includes 4GB of DDR4-2666 DRAM and sixteen NAND packages each containing 256GB, spread across four dies of 512Gbit each. The NAND this time is Kioxia/Toshiba BiCS4 96L TLC. This is rated for 3k Program/Erase cycles compared to the 5k P/E rating of the 64L Intel TLC used in the DC500 series. 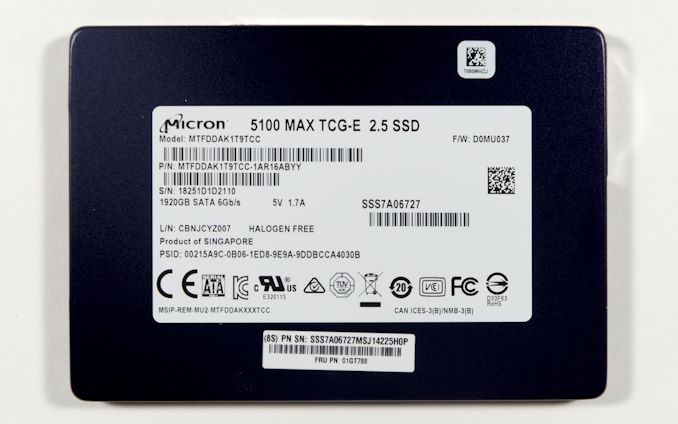 The 1.92TB Micron 5100 MAX may seem to be an odd drive to be reviewing in 2020, given that it was announced at the end of 2016 and has been replaced by two newer generations. We're reviewing it because MyDigitalDiscount has a batch of several thousand unused drives from an OEM excess deal, and they're selling them off for $299.99 each. That's in the same ballpark as the DC450R above and other entry-level server SSDs. And the 5100 MAX was top of the line for its time, rated for 5 drive writes per day and loaded with all the bells and whistles (TCG Enterprise encryption, power loss protection capacitors). Because the SATA interface hasn't gotten any faster in the years since the 5100 MAX was released, it stands a good chance of holding its own against modern drives. The one big caveat is that this drive is not being sold with the original manufacturer's warranty, but MyDigitalDiscount is providing their own warranty with the same 5-year/17600 TBW terms.

Inside the 5100 MAX we find the Marvell 88SS1074 controller, which was also used in Crucial consumer SATA drives until they switched to Silicon Motion with the MX500. The NAND flash is Micron 32L 3D TLC. This was Micron's first generation of 3D NAND and the die was designed as more of a MLC-first product even though it ended up being used predominantly as TLC. So what would have been 256Gbit dies as MLC are used as 384Gbit TLC parts, and four of them per package adds up to 192GB. Sixteen of these gives a nominal raw capacity of about 3072 GiB on a drive with 1920GB usable capacity, for an incredible 42% overprovisioning ratio compared to the 12% on the Kingston DC450R. The 5100 MAX uses 2GB of Micron DDR3-1600 DRAM. The power loss protection capacitors are lined up around the edges of the PCB.

One unusual feature of the 5100 MAX is that it will optionally use 12V power if provided. Most SATA SSDs use the 5V supply exclusively, and the 5100 MAX can run without the 12V supply. Our testing was conducted with the 12V supply turned on, but it wasn't until we saw power efficiency scores that looked too good to be true that we realized the calculations needed to include the 12V rail for this drive needed. Fortunately, our Quarch HD Programmable Power Module always records from both rails simultaneously, so we didn't need to re-run any tests.

Our Micron 5100 MAX arrived with the outdated D0MU037 firmware version, and we updated it to D0MU071 before testing.

For this review, we've overhauled our enterprise SSD test suite. The overall structure of our tests is the same, but a lot has changed under the hood. We're using newer versions of our benchmarking tools and the latest longterm support kernel branch. The tests have been reconfigured to drastically reduce CPU overhead, which has minimal impact on the SATA drives in this review but lets us properly push the limits of the many enterprise NVMe drives that have also been running through the new test suite this winter. We'll go into more detail about that in our upcoming enterprise NVMe review.

The Kingston DC450R's closest competitor is probably the Samsung 860 DCT, another entry-level server SSD that also lacks power loss protection. We also have results for Samsung's next step up, the 883 DCT which is another TLC-based drive but with all the usual enterprise features. From Kingston we have the DC500R and DC500M, the next two steps up their enterprise SSD product lineup. There are few direct competitors to the Micron 5100 MAX from current-generation SSDs; the high-performance/high-endurance market segments have largely moved over to NVMe or are lingering on SAS. Even Samsung's SM883 MLC SATA drive is only rated for 3 DWPD to the Micron's 5 DWPD. But at the price MyDigitalDiscount is charging for their stock of the 5100 MAX, it's totally fair to compare it against the more recent low-end enterprise SATA models. For the sake of comparison, we've also included results from the Samsung 983 DCT NVMe SSD, but we've omitted it from some graphs where it distorts the scale too much.