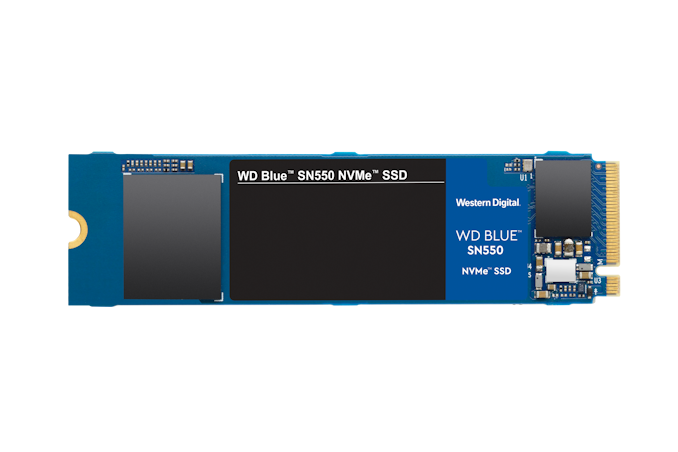 Western Digital is refreshing their NVMe-based WD Blue product line, replacing the WD Blue SN500 with the new WD Blue SN550. The SN550 updates both the controller and NAND, providing higher performance and capacity than the SN500.

The SN500 was Western Digital's first retail entry-level NVMe SSD, based on the OEM WD SN520. These drives use an in-house SSD controller based on the same architecture as the controller on their WD Black family (SN720/SN750), but with fewer channels, PCIe lanes and no external DRAM interface. The SN500 used the same PCB layout as the OEM SN520, which kept all the components within the first 30mm of the M.2 card, even though the SN500 is sold only as a M.2 2280 card rather than the variety of lengths the SN520 is available in.

The SN500 impressed us with much better performance than we expected from a DRAMless NVMe SSD, and the power efficiency was also pretty good. The SN550 promises better performance enabled by a move up to four PCIe lanes, allowing sequential transfer speeds to now hit 2.4GB/s compared to 1.7GB/s for the SN500. That higher performance will drive power consumption up a bit, but considering that the SN500 rarely exceeds 2W, that's not a big problem for the SN550. However, WD is giving the SN550 an "improved thermal design" that appears to consist of just moving the NAND flash package to the far end of the M.2 card rather than keeping it right next to the controller. Even though the SN550 adds a 1TB option that the SN500 lacked, it still uses only one NAND flash package. That means that at least the 1TB model has to be using Western Digital's 512Gb TLC NAND dies.

The WD Blue SN550 comes with the usual 5-year, 0.3 DWPD warranty, which is as good as can be expected for an entry-level drive. The initial MSRPs are on the high side, so these drives won't be reasonable purchases until prices come down a bit.