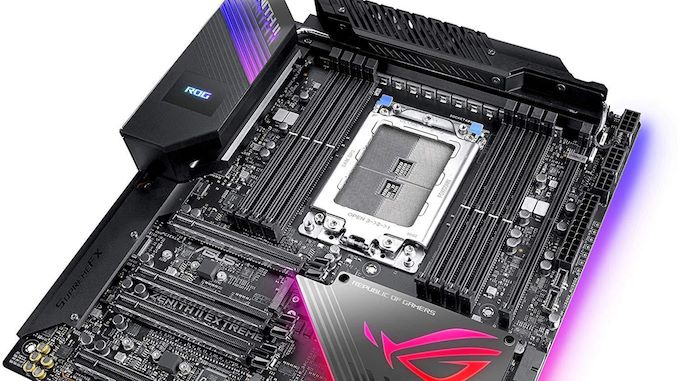 Following on from our launch day AMD Ryzen Threadripper 3970X and 3960X CPU reviews, we are taking a look at the accompanying flagship model from ASUS. The ASUS ROG Zenith II Extreme is the successor to ASUS's previous generation X399 board, the original Zenith Extreme, and comes packed with all the benefits of AMD's TRX40 chipset. This includes PCIe 4.0, a strong USB 3.1 G2 implementation, and support for up to DDR4-4733 in quad-channel across eight memory slots. With a 16-phase power delivery for the CPU and a LiveDash 1.77'' OLED color screen, the ROG Zenith II Extreme looks to set the standard for enthusiasts on AMD's new high-end desktop platform.

Not all motherboards are created equally and for the same purpose, even on the same chipset. Prime examples of this come in how a vendor markets its models with ASUS good at distinguishing its different models including the ASUS ROG Strix TRX40-E Gaming, and the more professional focused ASUS Prime TRX40-Pro. Having a strong brand identity is beneficial for users. On AMD's latest TRX40 chipset, designed for socket sTRX40 processors including the AMD Ryzen Threadripper 3970X and 3960, ASUS released a total of three new models for users to utilize the high-core and thread count. The most notable of the three designs is the ASUS ROG Zenith II Extreme which sits as the brand's flagship for TRX40 with a lot of bells and whistles you would associate with a top tier model on a top tier HEDT platform.

The ASUS ROG Zenith II Extreme is the second coming of the Zenith for AMD with the previous version designed for the X399 chipset; we actually reviewed the ASUS X399 ROG Zenith Extreme model last year. Some major refinements have been made with plenty of USB 3.1 G2 utilization due to more support natively through the TRX40 chipset, with TRX40 also pushing PCIe 4.0 onto the chipset, as X570 has done with the mainstream. On the aesthetics, ASUS has gone with a primarily black design, with a contrasting gun-metal grey on the chipset heatsink area.

Incorporating a full cover design that stretches around the rear panel and the PCIe slot area, the aesthetic is clean and sleek, which fits the flagship status of this board very well. The ASUS ROG Zenith II Extreme does have integrated RGB LEDs with an illuminated ROG logo on the chipset heatsink, RGB on the rear panel cover, and a strip on the underside of the PCB at the right-hand side. ASUS has also incorporated its LiveDash 1.77" color OLED panel which can display custom GIFs, or be used as a POST debugger. 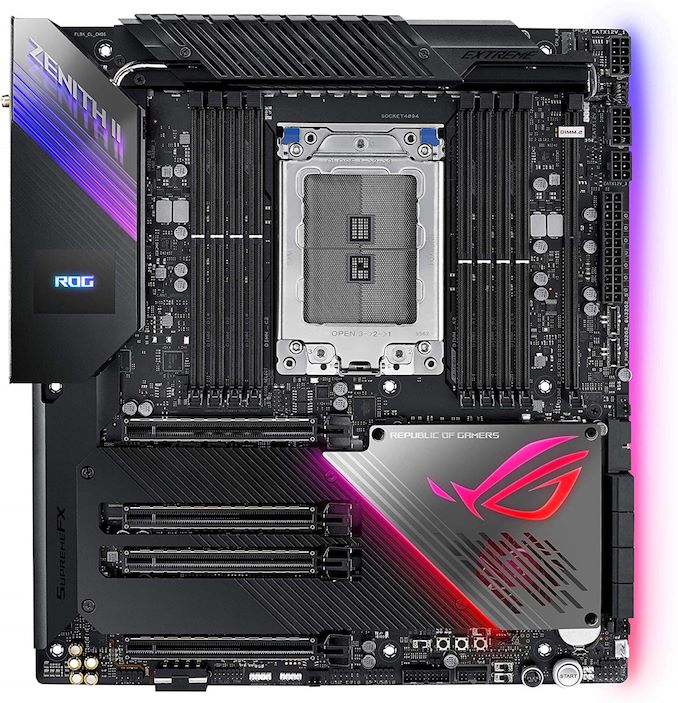 The core feature set is devised of a solid showing on the networking front with an Aquantia AQC107 10 Gigabit Ethernet controller, with assists going to an Intel I211-AT Gigabit controller, and an Intel AX200 Wi-Fi 6 wireless interface. Other primary features include three PCIe 4.0 x4 M.2 slots onboard with each slot complemented by an M.2 heatsink, while users can add a further two PCIe 4.0 x4 M.2 slots via the included ROG DIMM.2 module. This means users can install up to five PCIe 4.0 x4 M.2 drives into the ROG Zenith II Extreme. Also present is eight SATA ports with four coming from the chipset and has support for RAID 0, 1, and 10 arrays, while the other four are driven by a pair of ASMedia SATA controllers. There are four CPU driven full-length PCIe 4.0 slots that operate at x16/x8/x16/x8. 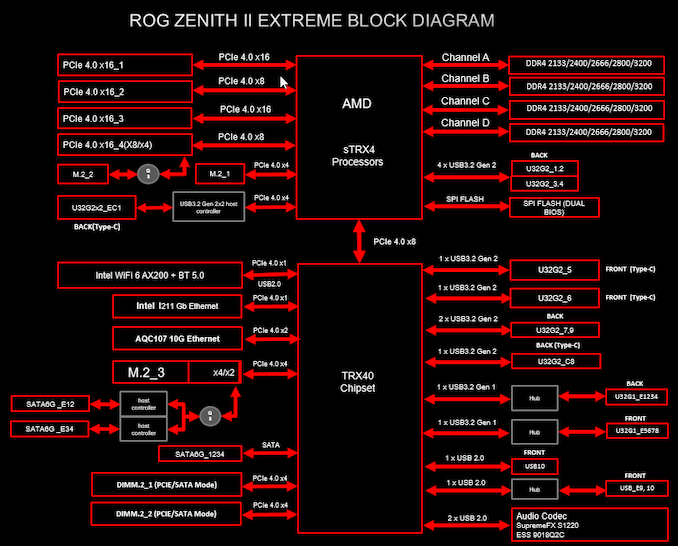 On the power delivery is a 16-phase layout with sixteen TDA21472 70A power stages. ASUS has been pretty guarded about which PWM controller it's using for its TRX40 models, but we know it is using an ASP1405I controller which is similar to the Infineon IR35201. Delivering power to the board as a whole is a trio of connectors including two 8-pin 12V CPU inputs, and one 6-pin PCIe power input. The ASUS ROG Zenith II Extreme also includes support for DDR4-4733, with up to 256 GB in quad-channel mode supported across eight memory slots.

Focusing on the performance, the ASUS ROG Zenith II Extreme is very competitive with other TRX40 models we've tested. It does run with a slightly higher power draw than other models, but with a LiveDash 1.7" OLED screen, plenty of integrated RGB, a premium controller set, and extra cooling fans for the power delivery, this is to be expected. The biggest win for the second iteration of the Zenith Extreme was in our  POST test, with the ASUS model performing very well. In our computational tests and gaming tests, we saw no anomalies with our Ryzen Threadripper 3970X. Overall performance is on the level we expect and is comparable with the other models on we have put on test so far.

The ASUS ROG Zenith II Extreme has plenty of overclocking features. ROG boards have been at the forefront of overclocking for many years and the Zenith II Extreme is no different. The board includes an overclocker's toolkit, with firmware that ASUS states is designed to maximise performance with AMD's Ryzen Threadripper 3000 processors. In our testing with the AMD Ryzen Threadripper 3970X, we managed to hit a stable overclock of 4.30 GHz. Stepping up from 3.7 GHz to 4.0 GHz at 1.25 V on the CPU VCore, we observed good levels of VDroop ranging with load CPU VCore voltages of being 1.200 and 1.208 V. Going up to 4.1 GHz and up to our maximum stable overclock of 4.3 GHz, the VDroop was lower, but still well within what is acceptable. When overclocking a 32-core processor like the Ryzen Threadripper 3970X, cooling is a factor that needs to be considered, and we opted for a 360 mm for good measure.

At present, the ASUS ROG Zenith II Extreme ($850) has just one competitor within its price segment, the GIGABYTE TRX40 Aorus Xtreme ($850) which is a clear rival in terms of features and design. While not much separates both models on paper, it all comes down to the aesthetics and ultimately, the performance. The ASUS ROG Zenith II Extreme is a solid example of a premium flagship on what is one of the most talked-about platforms all year. Comparing pricing to AMD's more consumer-focused desktop X570 chipset, flagships from vendors on both X570 and TRX40 are similar in terms of price ($800-900), and with the added cost of an AMD Ryzen 3rd generation Threadripper processor factored in, ASUS is aiming high with the Zenith II Extreme, and it certainly shows in the feature set and the aesthetics.