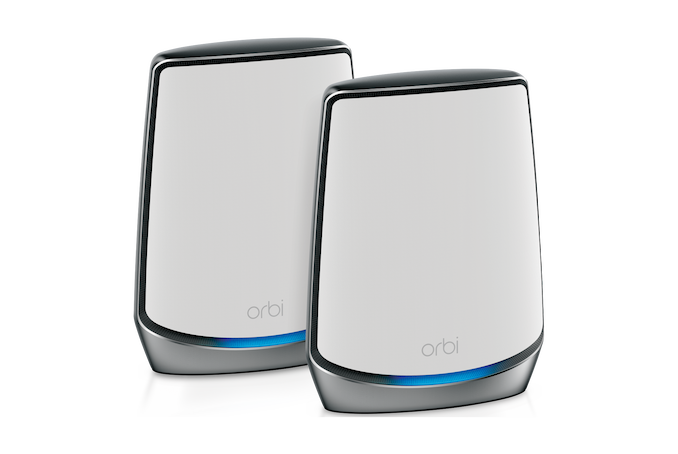 As part of IFA 2019, Netgear has a number of new announcements across different product lines. The wireless networking products are of particular interest to us. We had attended Qualcomm's Wi-Fi 6 Day last month, and I had tweeted about Netgear's Orbi Wi-Fi 6 (RBK850) that was showcased at the event. Things are being made official today, with additional details becoming available.

Netgear's Orbi systems need little introduction, given their wide retail reach and popularity. At CES 2019, the company had divulged some details about the meshing together of Orbi and Wi-Fi 6. The key to the great performance of the Orbi RBK50 (802.11ac) was the dedicated 4x4 wireless backhaul between the router and the satellites. This left two 2x2 streams (one in 5 GHz and one in 2.4 GHz) available for the client devices connected to either member of the kit. The Orbi RBK850 (the kit carries the RBK852 designation) retains the same 4x4 backhaul, but makes the move from Wi-Fi 5 to Wi-Fi 6. In theoretical terms, the wireless backhaul is now 2.4 Gbps (4x4:4 / 80MHz 802.11ax) compared to 1.73 Gbps in the RBK50. The clients also get 4x4:4 streams from the satellite or the router, with one set of spatial streams dedicated to 2.4 GHz duties / 1.2 Gbps, and another to 5 GHz duties / 2.4 Gbps. Wired backhaul is also supported (the dedicated wireless backhaul spatial streams are disabled in that case), just like the Orbi RBK50. 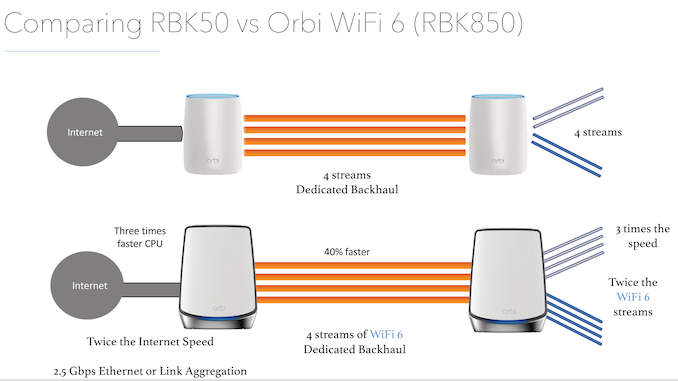 As announced at Qualcomm's Wi-Fi 6 Day, the Orbi RBK852 is based on Qualcomm's Networking Pro 1200 platform. It will be available next month and the kit (a single router and satellite) will be priced at $700. 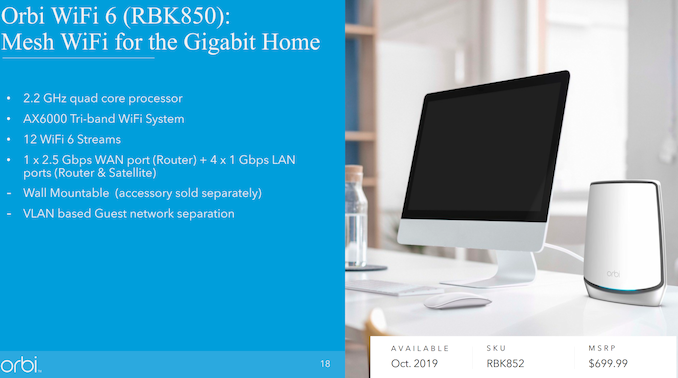 In other Orbi news, Netgear is announcing that the Orbi Voice and Outdoor Orbi satellites for the original Orbi (802.11ac) are getting a 'Universal Mode' update, enabling them to act as extenders for any router (even non-Netgear ones). This is a welcome addition to the Orbi family's feature set, and will help the company draw more people into the Orbi ecosystem.

Netgear is also announcing the Nighthawk EAX80 Wi-Fi 6 wireless extender today. It is based on a Broadcom chipset and meant to complement the Wi-Fi 6 routers already in the market. 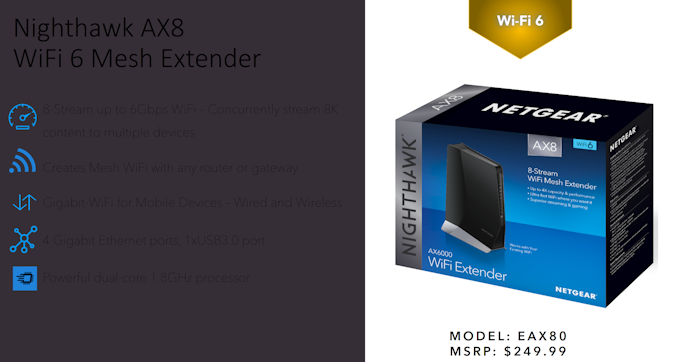 Netgear is aiming to promote ease of extender use with an app-based configuration flow. The EAX80 will be available later this month for $250.

Based on reader feedback for previous Wi-Fi 6 articles, I brought up two questions for Netgear related to the above announcements - one related to the pricing of the Orbi RBK852 at $700 (a tad too high?), and another related to the consumer appetite for Wi-Fi 6 equipment given the current draft nature of the 802.11ax standard.

On the cost aspect, Netgear noted that the premium Wi-Fi 6 Nighthawk routers priced around the $300 - $400 range have been selling relatively well. Given that a mesh system is essentially the hardware for at least two wireless routers in one kit, the pricing is justified. Regarding the consumers' ability to stomach a $700 expense for a Wi-Fi system, Netgear pointed to internal surveys that showed consumers treating Orbi-like Wi-Fi systems as long-term investments (3-5 years). Given that these are folks who have invested in the latest premium notebooks and phones (Wi-Fi 6 clients), Netgear believes that the target market would not be put off by the price tag of the Orbi Wi-Fi 6 kit.

Apropos the Wi-Fi 6 standard's pending ratification, Netgear believes that the issues currently holding back Wi-Fi 6 in the draft stage are all controllable via the firmware, and will not require any hardware fixes. Since ongoing firmware updates have pretty much become the norm for most electronic products nowadays, any changes in the standard between now and eventual ratification can also make it to units already deployed in the field. It must also be noted that a final standard is needed to ensure maximum inter-operability between Wi-Fi 6 clients and APs from different vendors. Given that Netgear has systems based on silicon from all three major chipset vendors (Qualcomm, Broadcom, and Intel), interoperability issues should not be much of a concern for their customers.

Overall, we see that the Wi-Fi 6 market is poised to take off with the ongoing launch of multiple Wi-Fi 6 client systems and phones. The rollout of DOCSIS 3.1 as well as FTTH ISPs has brought gigabit Internet to many households, and consumers' appetite for practical gigabit Wi-Fi has been whetted. Netgear's 802.11ax portfolio expansion is happening at the right time for the company to take advantage of the current state of the market.