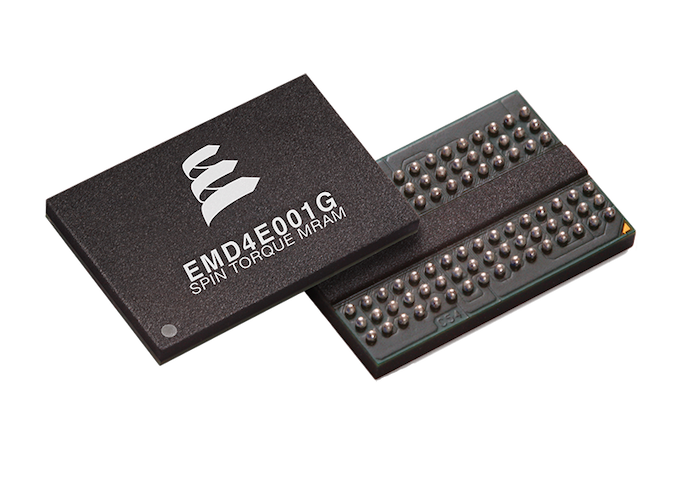 Everspin's toggle MRAM is well-established as a non-volatile memory option for embedded and industrial applications, with a strong record for reliability. However, their small capacities of up to 16Mb (so far) have severely limited the potential use cases. Everspin's more recent spin-transfer torque MRAM (STT-MRAM) still can't directly compete with NAND flash on capacity, but with 1Gb parts now in production and larger parts in development, STT-MRAM is becoming useful for a new class of applications.

DDR memory controller IP that supports DRAM and Everspin's STT-MRAM is readily available, so designers of SSD controllers and other ASICs can easily add support for MRAM to products that can benefit from 1Gb or more of high-speed non-volatile memory. For SSDs, the most compelling use for MRAM is to reduce or eliminate the need for supercapacitors in enterprise SSDs. MRAM capacity is not quite high enough to entirely replace DRAM buffers in large, high-performance SSDs, but the 1Gb parts make for a decent write cache that is inherently non-volatile. Since MRAM has performance competitive with DRAM, it can be used to store FTL updates and newly written user data while still meeting the strict performance consistency requirements of enterprise SSDs.

It's not clear how much cost savings MRAM currently allows compared to a bank of supercapacitors, but Everspin and their partners cite other benefits as well: it's often much easier to fit MRAM into a small SSD form factor, and MRAM chips can outlast the useful lifespan of large capacitors, which sometimes fail before an SSD's NAND flash write endurance is exhausted.

Using DRAM, MRAM and NAND flash together in a solid state drive is not a new idea. Seagate showed prototypes at Flash Memory Summit 2017 based around Marvell controllers, and last year at FMS IBM announced a shipping product with all three types of memory and an FPGA-based controller. Now that two more controller designers are on board with the concept, it's clear that this is a viable market for Everspin if they can follow through on reducing cost per bit and continuing to increase capacities.

Everspin and Sage are both exhibiting at Flash Memory Summit next week, and we are expecting more MRAM-related announcements at the show.