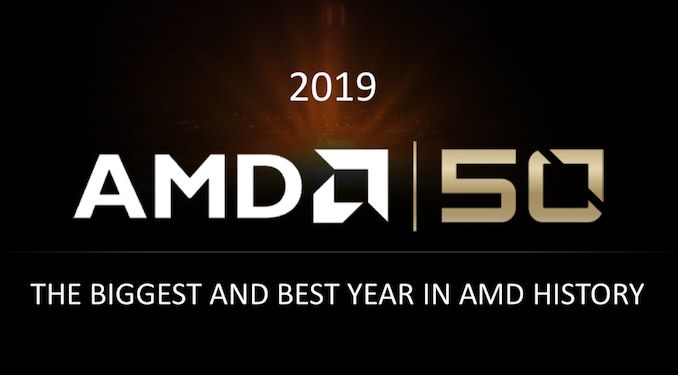 AMD this week held its Annual Shareholder Meeting where it reiterated its current technology roadmap and once again confirmed that that its major products set to be released this year based on 7nm will be formally introduced in Q3. Previously the company implied on launch timeframes of its Navi GPU (at least one of them), Matisse CPUs, and Rome server CPUs, but never made a firm promise about the third quarter - this announcement is a commitment to delivering these products in Q3.

On a high level, AMD believes that there are four technology pillars that will define its product roadmap in 2019 and forward. These pillars are: the Zen 2 CPU microarchitecture, its Navi GPU architecture, chiplet-based design architecture that enables it to mix and match features and technologies to build a right processor for a given platform, and IP for TSMC’s 7 nm manufacturing technology. 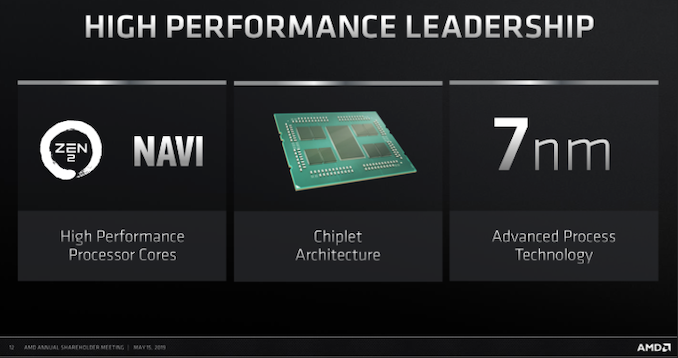 Since R&D processes take years, it was crucial for AMD to make the correct bets when its comes to microarchitecture and fabrication process. That said, this year’s product launches represent a culmination of multi-year efforts by the whole company, but considering that numerous architectural things may be re-used for years, it is important that they have been developed and implemented. 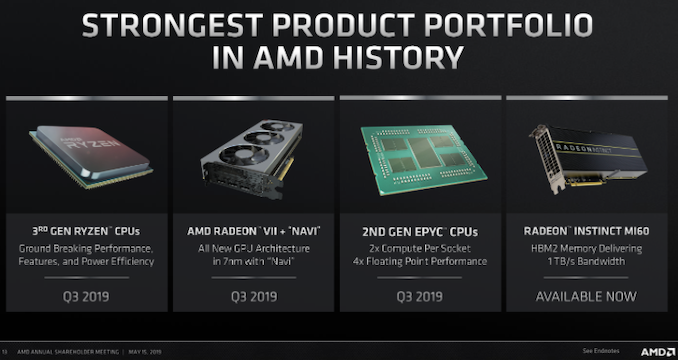 AMD’s 3rd Generation Ryzen processor, known as Matisse, promises a significant performance increase in general-purpose tasks from where AMD is today. It also adds several new features, such as PCIe 4.0 interface support. Launching this product “shortly in Q3” means that the company wants to make it available already during the important back-to-school season and well ahead of critically important holiday sales season.

Another vital product series for AMD is its next-gen lineup of GPUs based on its Navi architecture. At least one of these graphics processors will be launched in the third quarter. What is noteworthy is that Navi GPUs will coexist with AMD’s Radeon VII graphics cards, which indicates that the latter will continue to serve the enthusiast segment of the market. Furthermore, AMD’s 7nm Vega GPU in the form of the Radeon Instinct MI60 will continue to be offered for high-performance computing workloads.

Also due in Q3 are AMD’s 2nd Gen EPYC processors, known as Rome. These server CPUs are set to feature up to 64 cores powered by the company’s Zen 2 microarchitecture. It is worth keeping in mind that it takes server users some time to adopt new CPUs, and the launch of AMD’s 2nd Gen EPYC in Q3 does not necessarily mean that these processors will be used by a massive amount of designs straight away. Nonetheless, it is still important to release them rather sooner than later in a bid to ramp them up as soon as possible.

One product family worth mentioning is Threadripper. AMD's high-end desktop platform, currently available at 8-32 cores, is expected to be encroached on by the Ryzen 3000 series. AMD briefly held in its roadmaps that Threadripper based on Rome would be coming in 2019, however in its most recent disclosures, that commitment has no longer appeared and AMD has not commented on the matter. It could be that someone made a mistake putting it on the singular slide deck in which it appeared, or there's a level of inconsistency between AMD's presentation teams based on what they are presenting to whom. Hopefully AMD will clarify the matter in due course, and with Computex coming in two weeks, it would be a perfect time to do so. 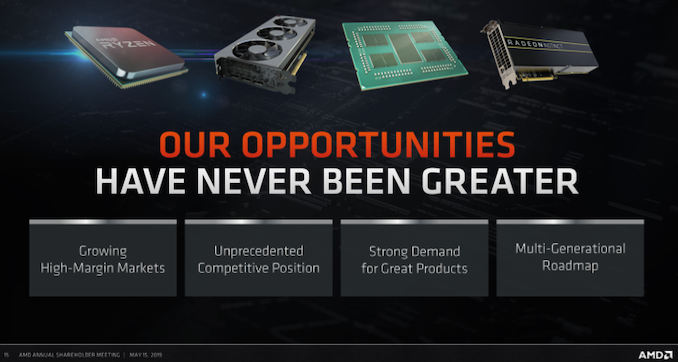