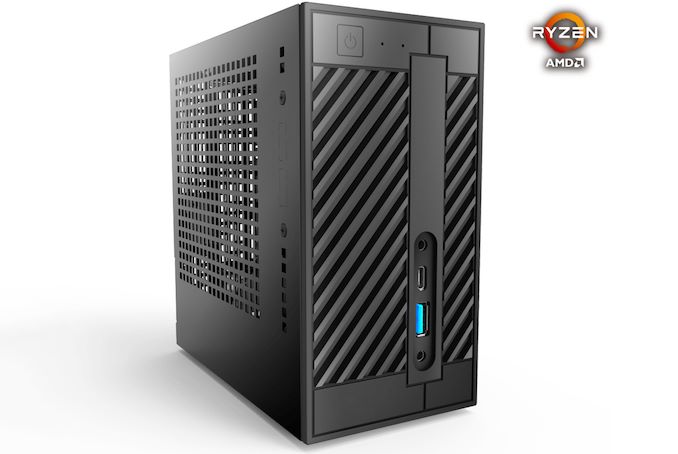 Small form-factor (SFF) machines have emerged as a major growth segment in the desktop PC market. Performance per watt is an important metric for such systems, and Intel has pretty much been the only game in town for such computers, given that AMD platforms prior to the launch of Ryzen could barely compete on that metric. The NUC (UCFF) and mini-STX (5x5) were introduced by Intel as the standard motherboard sizes for the SFF market, and we have previously seen AMD-based NUC-like platforms (namely, the Zotac ZBOX CA320 nano back in 2014, and the Compulab fitlet-XA10-LAN in 2016).

Not to be left out entirely, however, AMD's vendors are finally starting to dip their toes back in to the mini-PC market with Ryzen-based systems. Earlier this year, ASRock became the first vendor to announce an AMD-based mini-STX system - the DeskMini A300. So for today's review we're delving deep into the performance and features of the DeskMini A300, and seeing how it stacks up against other contemporary SFF PCs.

ASRock's DeskMini series is a family of barebones systems in the mini-STX (140mm x 147mm motherboard / 1.92L chassis) and micro-STX (188mm x 147mm motherboard / 2.7L chassis) form-factors. Here, 'barebones' differs slightly from the NUC terminology. While the NUCs just require the user to plug in RAM and storage, the mini-STX and micro-STX boards are socketed. This gives users a choice of CPU to install, making it similar in more respects to a typical DIY build.

The DeskMini A300 that we are looking at today is a mini-STX machine capable of supporting AMD AM4 processors with integrated graphics. The board uses the AMD A300 chipset, and supports both Ryzen-based Raven Ridge APUs and the older Bulldozer-based Bristol Ridge APUs with a TDP of up to 65W.

There are multiple versions of the DeskMini A300 available, depending on the optional components that are bundled. The product page mentions the DeskMini A300 and the A300W, with the latter's accessory pack including an Intel AC-3168 Wi-Fi kit. On the Overview page, however, a number of optional components are mentioned - an AMD APU cooler (for up to 65W, with a dimensions of 77mm x 68mm x 39mm and speeds between 1950 and 3500RPM), a VESA mount kit, a M.2 Wi-Fi kit, and a USB 2.0 cable to put the dual USB-port slots on the top / side of the chassis to use.

It must be noted that the chassis design only allows for coolers up to 46mm in height - this means that the Wraith coolers (Stealth @ 54mm, Spire @ 71mm, and the Max @ 85m) are all unsupported. Users might be better off the optional cooler that ASRock advertises for use with the DeskMini A300.

Overall, our barebones review sample came with the optional cooler in the package. ASRock also provided us with an AMD Ryzen 5 2400G APU to install in the system. We completed the build with a 500GB Western Digital WD Blue SN500 NVMe SSD and a 16GB G.Skill Ripjaws DDR4-3000 SODIMM kit. 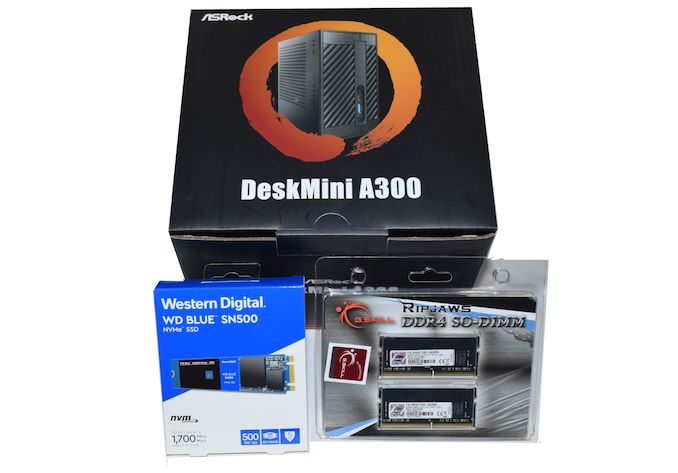 The specifications of our DeskMini A300 review configuration are summarized in the table below.

Similar to the other DeskMini systems, the A300 is equipped with two DDR4 SO-DIMM slots (supporting DDR4-2400 with Bristol Ridge APUs, and DDR4-2933 with Raven Ridge). There are two M.2 2280 slots on board (one on the same side as the CPU socket, and another on the underside). This is in contrast to the Intel-based DeskMini 310 board which comes with just a single M.2 slot. The two M.2 slots are PCIe 3.0 x4. However, if the Athlon 2xxGE series APUs are used, the second slot operates in PCIe 3.0 x2 mode. 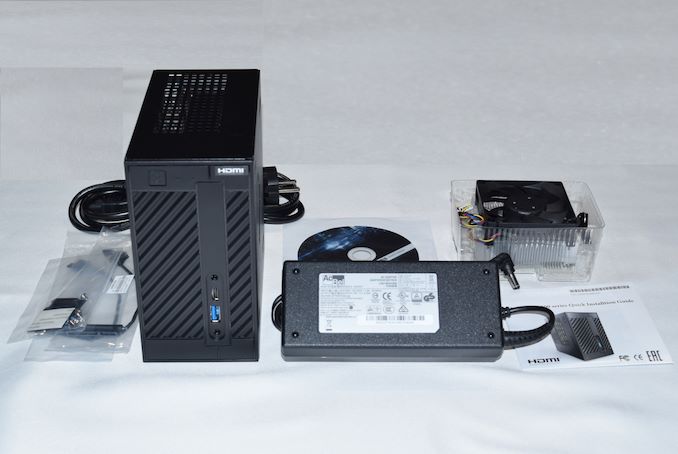 The package includes the drivers on a CD (a USB key, even read-only, is much more preferable), a quick installation guide, screws to install the storage drives, rubber feet to raise the chassis when it is placed vertically, a couple of SATA cables, and a geo-specific power cord.

In addition to the extra M.2 2280 NVMe SSD slot, the DeskMini A300 scores over the DeskMini 310 by sporting a native HDMI 2.0a display output. Note that HDMI display output support on Intel processors is restricted to HDMI 1.4a. Vendors wanting to implement a HDMI 2.0a port in their system have been forced to place a LSPCon on board to convert on of the Display Port 1.2 outputs from the processor to HDMI 2.0a, which results in increased board costs. Since the target market for the DeskMini 310 could make do with a single 4Kp60 output using the DisplayPort port, ASRock didn't bother to place a LSPCon on that board. The DeskMini A300 supports simultaneous dual 4Kp60 displays using the DisplayPort and HDMI ports in the rear. Triple display output is also supported, but the D-Sub port can support only a 2048 x 1536 resolution at the maximum.

The gallery above takes us around the chassis design and the board features. Without the Wi-Fi antenna pigtails to worry about, it was a breeze to draw out the board from the chassis and install the components.

The DeskMini A300 comes with an AMD A300 Promontory chipset. It is the most basic offering from AMD in the AM4 lineup. Overclocking is not supported. There are no USB 3.1 Gen 2 ports, and StoreMI (storage acceleration using a combination of PCIe and SATA drives) is also not supported. From the AIDA64 system report, we see that the second M.2 2280 port (on the underside of the board) is enabled by the x2 / x4 NVMe link from the processor. The remaining 12 free PCIe lanes from the Ryzen 5 2400G are configured as two x4 links for the M.2 slots on the top side (Wi-Fi and storage). The remaining x4 link is used in a x1 configuration for the Realtek LAN controller. All the rest of the I/O ports (USB and SATA) are direct passthrough from the SoC portion of the Ryzen 5 2400G.

Moving on to the BIOS features, the use of the A300 chipset rules out any overclocking of the Ryzen processor itself. Upon boot up, our configuration came up with the G.Skill SODIMMs in DDR4-2400 mode. The BIOS allowed us to load the available XMP profile (DDR4-3000), and a simple saving of the change followed by a power cycle resulted in the DRAM configured for 3000 MHz operation.

Our review sample shipped with the BIOS v1.2. Prior to benchmarking, we upgraded to the recommended version, 3.40. Screenshots from both BIOS versions can be seen in the gallery above.

In the table below, we have an overview of the various systems that we are comparing the ASRock DeskMini A300 against. Note that they may not belong to the same market segment. The relevant configuration details of the machines are provided so that readers have an understanding of why some benchmark numbers are skewed for or against the ASRock DeskMini A300 when we come to those sections.

The rest of the review will deal with performance benchmarks - both artificial and real-world workloads, performance for home-theater PC duties, and an evaluation of the thermal design under stressful workloads.