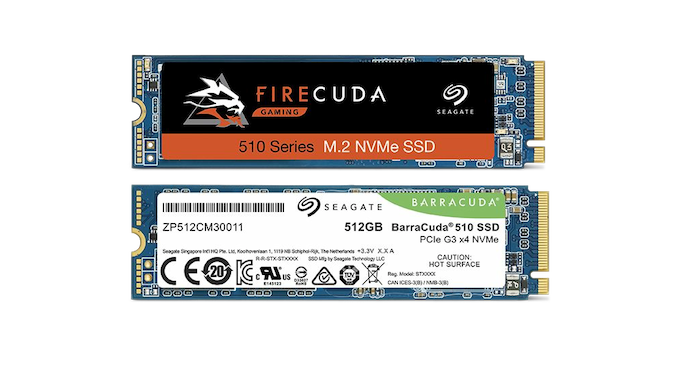 Seagate recently returned to the consumer SSD market with the BarraCuda SSD. It didn't make much of a splash, but Seagate got their feet wet and kicked off a new strategy as a seller of Phison-based consumer SSDs. Now Seagate is using Phison's new E12 NVMe controller to enter the high-end market segment with a lineup of M.2 NVMe SSDs: the BarraCuda 510 and FireCuda 510.

At first glance, it may seem silly for Seagate to use two different names to refer to what are essentially two halves of the same product line. However, the current state of high-end consumer NVMe SSDs is that only the largest models are able to reach the impressive speeds that are closing in on the limits of a PCIe 3 x4 link. Smaller models are held back by having too few NAND flash memory dies for the SSD controller to access in parallel. This has always been true to some extent, but now that each 3D TLC die is providing either 256Gb or 512Gb, the small-drive performance penalty is affecting rather mainstream drive capacity points. For this reason, it makes sense for Seagate to reserve their gaming/enthusiast-oriented FireCuda branding for the 1TB and 2TB models, while their more mainstream BarraCuda branding is applied to the 256GB and 512GB models.

The two drives are still essentially the reference hardware designs from Phison, and we expect real-world performance to be in line with other drives based on the same platform, such as the Corsair MP510 or the MyDigitalSSD BPX Pro. Seagate has not announced pricing for the new models, which will ship in March 2019. Seagate's pricing on the BarraCuda SATA SSD has been nothing special but still falls within the reasonable range for a mainstream drive. With the new NVMe models, we hope to see Seagate be a little more aggressive in order to reestablish their brand in an era where consumers no longer have much need for mechanical hard drives.