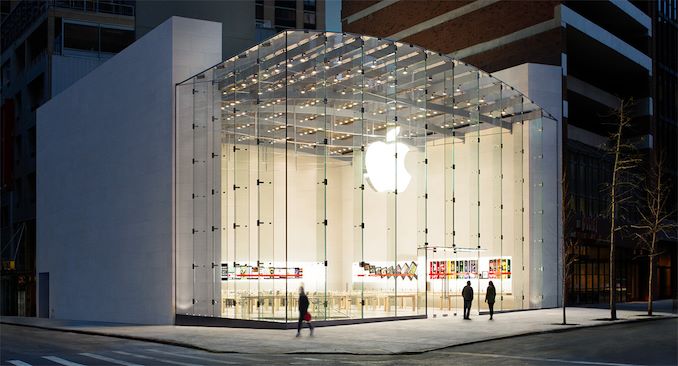 Apple and Dialog Semiconductor on Wednesday signed an agreement that will see Apple buy part of their long-term power management IC supplier, while continuing to do regular business with the remaining parts. Under the terms of the deal, Apple will be licensing a number of power management technologies from Dialog, hiring over 300 Dialog employees, and assuming control of several Dialog facilities in Europe. Meanwhile the deal also sets up Apple to be a long-term customer of the remainder of the company, with Dialog contracted to supply hardware through 2021. The two deals will net the semiconductor developer around $600 million in total.

One of the key ways to keep power consumption of modern SoCs in check is by carefully managing their power supply using advanced power management ICs (PMICs). Historically, Apple has been using third-party power management ICs (including those from Dialog), but it looks like the company intends more directly produce and integrate at least some of this technology for future products. Apple has been investing in development of its own semiconductors since 2008, gradually expanding its range of products, IP portfolio, and engineering teams. So the addition of power management IP and developers fits well with Apple’s strategy of moving to in-house developed technologies.

In a bid to enable development of its own PMICs, Apple will pay Dialog $300 million in cash for the parts of the business they are outright acquiring. The money will bring Apple 300 experienced employees, four Dialog facilities in Livorno (Italy), Swindon (U.K.), Nabern and Neuaubing (Germany), as well as an IP license for certain power management technologies. The aforementioned employees have worked closely with Apple for years, so they know requirements of the company.

In fact, Apple reportedly established PMIC development centers in Munich (Germany) and California, which employed 80 engineers as of early-2017. Apple has never formally confirmed this and it is unknown how successful these teams were. In any case, with 300 engineers and three facilities, Apple’s R&D capabilities in this field will get considerably stronger.

Separately, Apple will prepay $300 million for Dialog products that will be delivered starting from 2019 and ramping up in 2020 – 2021. The products in question are PMICs used for power management and charging, chips for audio subsystem, and “other mixed-signal integrated circuits”. Given the fact that Dialog does not say anything about supply agreement beyond 2021, it is not clear whether Apple intends to go fully vertical after this time, or if they simply aren't looking to sign (public) contracts farther out than this.

Dialog says that $600 million from Apple will enable it to invest in development of various mixed-signal solutions for IoT, mobile, automotive, computing, and storage markets. Essentially, the company is looking to hasten their transition to a broader supplier of supporting hardware, allowing them to tap into new and growing markets while diversifying their product portfolio and income streams.