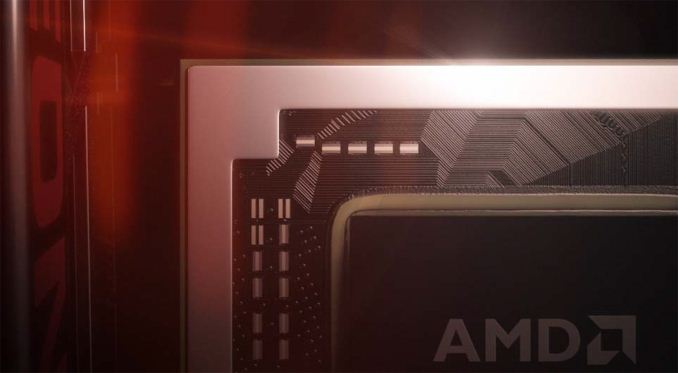 With the announcement that its long-time manufacturing partner (and outright former fab) GlobalFoundries is dropping out of the race for bleeding-edge manufacturing nodes, the second big question of the day has been what this means for AMD. For all intents and purposes, AMD and GlobalFoundries have been tied at the hip since GloFo was spun off from AMD back in 2009, and consequently GloFo has always been AMD’s fab of choice for CPUs, and more recently GPUs. So with GlobalFoundries’ changes to their process development plans, AMD is outlining their new partnerships and manufacturing plans.

In short, AMD is now shifting over the bulk of their bleeding-edge development to TSMC. The company is careful to note that they “intend to focus the breadth” of their 7nm production at TSMC rather than all 7nm production – leaving open the possibility of using TSMC rival Samsung in the future – but the message is clear that we should expect AMD’s major 7nm products to be fabbed out of TSMC now that GlobalFoundries is no longer an option.

TSMC being AMD’s new bleeding-edge partner should of course come as no surprise, as TSMC has been the fab AMD has fallen back on for other projects in the past. TSMC was until the most recent generation the fab AMD used for their GPUs, and it’s where their semi-custom APUs for Microsoft and Sony have been made. Meanwhile AMD and TSMC have already previously announced that some of AMD’s forthcoming 7nm products, including their 7nm Vega and “Rome” EPYC CPU would be fabbed by the Taiwanese foundry. So today’s announcement is largely confirmation that AMD is going to continue down this path, with most (if not all) of their other planned 7nm products ending up at TSMC as well. 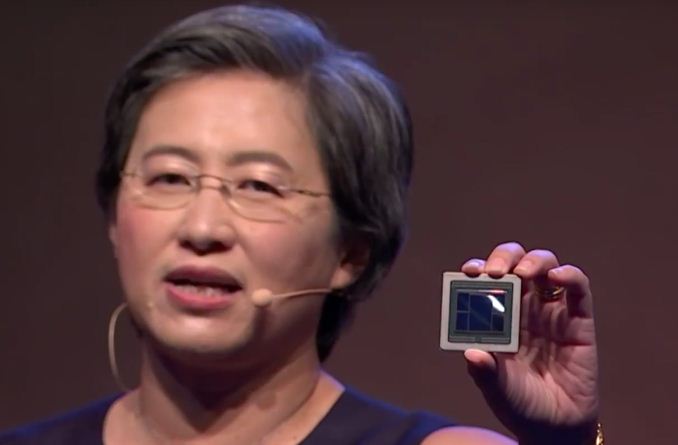 As it stands then, AMD’s plans remain largely unchanged. AMD’s 7nm Vega GPU has been successfully taped out, and it is currently sampling among AMD’s customers with a commercial launch towards the end of this year. Then in 2019, AMD intends to release its CPUs featuring its Zen 2 microarchitecture. These processors will also be fabbed by TSMC and the chip designer has already received the first working silicon.

Farther out, AMD’s announcement also confirms that their upcoming Navi architecture GPUs, which are also planned for 7nm, will be fabbed at TSMC. Though AMD has not disclosed any timeframes regarding these GPUs and whether any of them have been taped out.

Overall, AMD seems reasonably happy with the current state of affairs, stating that “Our work with TSMC on their 7nm node has gone very well and we have seen excellent results from early silicon.” As a close GlobalFoundries customer, I have to imagine that AMD was the first such customer informed of these plans, so they’ve had the most time to adjust their internal plans. None the less, the company sees it as win for their “flexible foundry” strategy, and as a result, they do not expect any changes to their product roadmaps despite the foundry changes.

That said, while AMD seems to be handling this well, this isn’t a feint on their part, and that they’ve had to make changes behind the scenes. The company has confirmed to us that they had started development of a chip to be made using GlobalFoundries' 7LP process technology, but this one had not been taped out yet (it was on track for a Q4 tape out, according to GF). So we will be seeing products that weren’t originally intended for TSMC.

As for AMD’s GlobalFoundries relationship, the company will be continuing to work with GlobalFoundries for some time to come. GloFo is still AMD’s fab for their current Vega, Polaris, and Zen/Zen+ chips, and AMD will continue making chips there. Furthermore should AMD decide to start on any new chips that don’t require a bleeding-edge manufacturing process (e.g. a chipset), then GlobalFoundries is still an option. 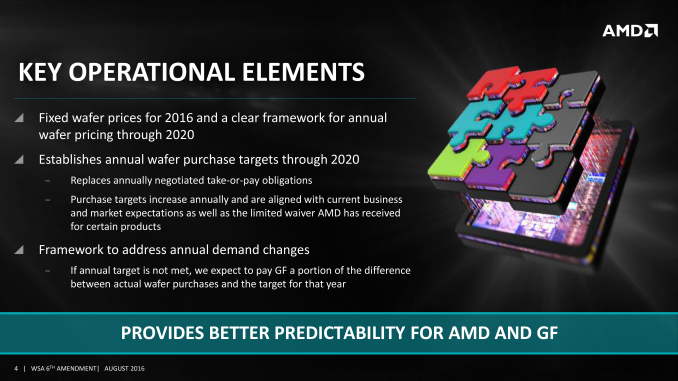 To be renegotiated: AMD's most recent GF Wafer Share Agreement

The biggest remaining question then will be what this means for AMD and GlobalFoundries longstanding Wafer Share Agreement (WSA), which has kept the two companies bound together tightly and required that AMD do most of its manufacturing at their former fab. Today’s announcement from GlobalFoundries and AMD has confirmed that the two companies will be renegotiating the WSA – presumably a requirement should GloFo no longer intend to offer bleeding-edge nodes – though to what extent remains to be seen. AMD by their own admittance is betting very heavily on 7nm products, so it’s not clear whether the company is going to need all that many wafers from GlobalFoundries in a couple years’ time. In the meantime, AMD does not believe it is going to need any WSA with TSMC.