During Intel's keynote at Computex 2018, Intel Client Computing Group manager Gregory Bryant offered a brief preview of the upcoming M.2 version of the Optane SSD 905P high-end NVMe SSD. Intel's Optane SSD lineup has been split between the high-performance, high-power drives in 2.5" U.2 and PCIe add-in card form factors, and the much lower-performance M.2 drives of the Optane Memory and Optane SSD 800P product lines. The existence of a M.2 version of the 905P was leaked before the U.2 and AIC versions of the 905P were officially launched.

At first glance, it would appear that the combination of Intel's high-end Optane SSD controller architecture and the more consumer-friendly M.2 form factor would be a welcome addition to the product family. However, this drive appears to be nearly identical to the enterprise Optane SSD DC P4801X we spotted earlier this year at the Open Compute Project Summit. The only difference we can spot is that the drive shown at Computex appears to have a metal heatspreader over the SSD controller, but the presentation's images of the drive show the bare controller as exhibited at OCP Summit. This means that the M.2 Optane SSD 905P will use the 110mm long M.2 form factor generally used by enterprise M.2 drives, instead of the 80mm length used by almost all consumer M.2 drives. This extra length will prevent the M.2 Optane SSD 905P from being used in most notebook computers (though Intel claims the 905P M.2 will be suitable for mobile use), and will exclude it from many M.2 slots on desktop motherboards. Intel has mentioned using the 905P in quad-M.2 riser cards such as those sold by ASUS and ASRock. Those adapters allow high-end desktops to provide four PCIe lanes to each of four drives by enabling port bifurcation on one of their PCIe x16 slot, allowing for the best possible NVMe RAID performance. 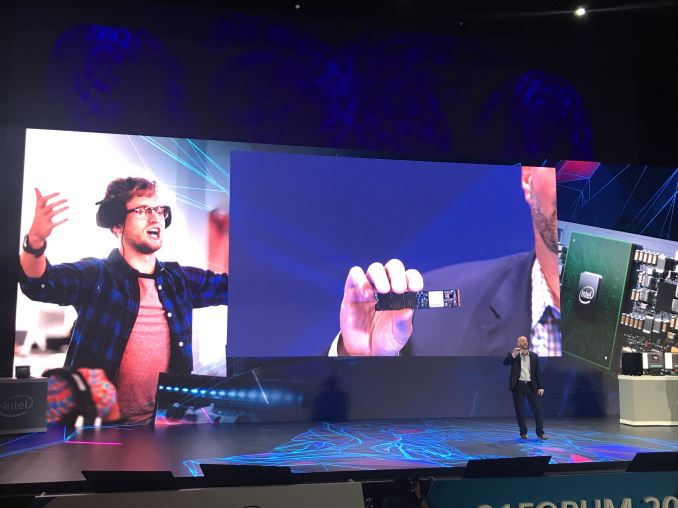 The M.2 form factor will present additional challenges in power delivery and heat removal. The M.2 slot only provides a 3.3V supply, and even the most power-hungry M.2 drives are limited to 2-2.5 A draw. The M.2 905P will be limited to about half to two thirds of the power draw of the 905Ps in larger form factors that include a 12V supply. Intel and Samsung have sought to work around this problem by introducing new M.2-like form factors for enterprise SSDs that add a 12V supply (and hot-swap capability), but they aren't backwards compatible and won't be showing up in the consumer market.

Even when limited to 6-8W, the M.2 905P may have trouble with heat and its impact on performance. The primary performance advantages of Optane SSDs are their exceptional performance at low queue depths (thanks to the low latency of 3D XPoint memory compared to NAND flash memory), and the reliability of their high performance, which can be sustained more or less indefinitely since there are no SLC write caches to fill up and minimal garbage collection for the controller to perform under the hood. However, even with a heatspreader over the SSD controller, it is likely that sustained workloads will lead to thermal throttling unless the 905P is housed in a more substantial cooling system, such as the actively-cooled quad-M.2 adapters. Such throttling is also difficult to avoid for flash-based M.2 SSDs, but in general consumer storage workloads don't provide enough sustained I/O for throttling to be a concern. Optane SSDs are marketed precisely for the workloads that are an exception to that rule, so throttling will be harder to overlook.

The M.2 version of the Intel Optane SSD 905P is stated as having a 380GB capacity, slightly different from the 375GB capacity used by the enterprise Optane P4800X and P4801X. It's not clear if the difference is due to the consumer drive using slightly less overprovisioning, or if it's another case of inconsistent unit definitions and rounding as in the case of the 64GB Optane Memory M10 vs the 58GB Optane SSD 800P. Decreased overprovisioning is certainly possible, because Intel is feeling more confident about the write endurance of the 3D XPoint memory used by Optane products, to the point that upcoming enterprise Optane SSDs will have double the write endurance rating of the current products despite still using the first-generation 3D XPoint memory parts. Even a flagship drive for the enthusiast consumer segment doesn't need to support 60 drive writes per day, so Intel should have some room to trade endurance for capacity while still offering the highest endurance in the consumer SSD market.

Intel will officially launch the 380GB M.2 Optane SSD 905P later this summer, and will provide full specifications at that time.