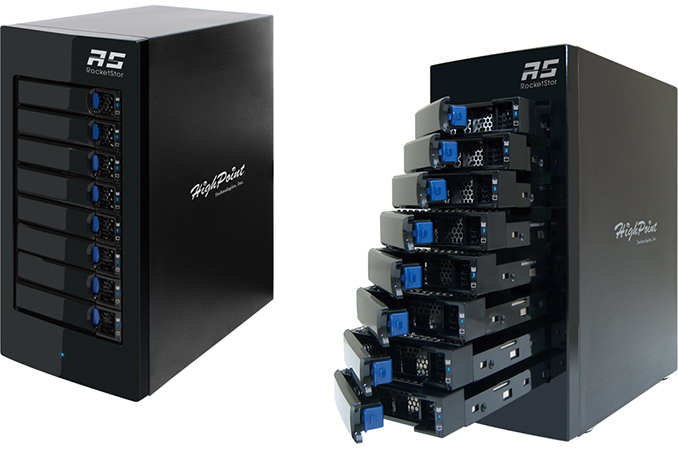 HighPoint has started to ship its RocketStor 6600-series Thunderbolt 3 RAID enclosures that can accommodate up to eight storage devices. The enclosures support all popular RAID levels and can enable up to 1.6 GB/s throughput with HDDs or up to 2.7 GB/s throughput with SSDs, which is in line with other 8-bay TB3 storage boxes. Meanwhile, one of the key characteristics of the RocketStor 6618T enclosure is its $999 price point. 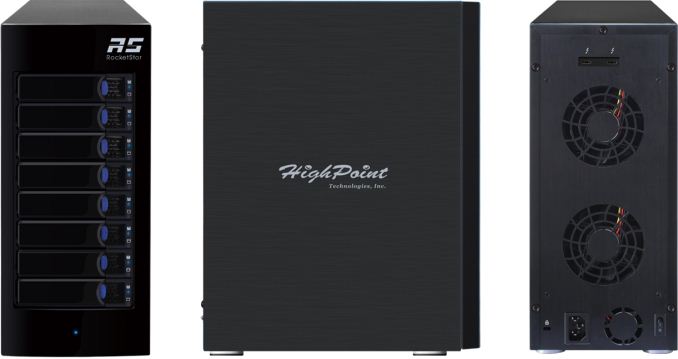 As for performance, the HighPoint RocketStor 6600-series are designed for various professional applications and are aimed to support simultaneous streaming, editing, and backup of UHD video or other data. When an 8-bay RocketStor 6618A enclosure us populated with HDDs, its maximum sequential read performance is rated at up to 2000 MB/s, with SSDs, its performance as listed increases to 2700 MB/s. The RocketStor 6618T (with software RAID) is a bit slower, offering up to 1800 MB/s throughput with HDDs and up to 2400 MB/s with SSDs. At present, HighPoint does not reveal performance numbers for the rackmount 16-bay RocketStor 6674T.

Just like competing DAS products from other manufacturers, the HighPoint RocketStor systems feature two Thunderbolt 3 ports, making it possible to daisy chain a display or another TB3 device to the storage arrays. The maker bundles one active Thunderbolt 3 cable certified for 40 Gb/s.

One of the key things about the HighPoint RocketStor 6618-series Thunderbolt enclosures are their recommended prices: the more advanced model 6618A is priced at around $1300, whereas the model 6618T (with software RAID and lower performance) is set to cost around $1000. With such price points, HighPoint aims to make Thunderbolt 3-based RAID storage solutions considerably more accessible compared to pre-configured off-the-shelf DAS systems.