One Month With: The Huawei TalkBand B3 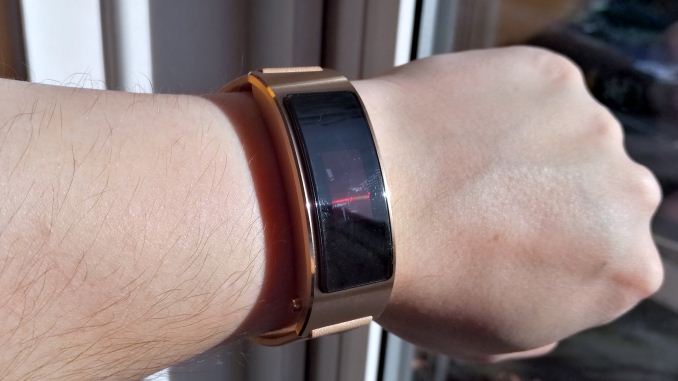 I think I'm getting the reason why smartwatches exist now - or at least watches in general. When I was younger, before smartphones, I wore a simple cheap watch to tell the time. When smartphones came along, I ditched the watch as it was just 'another thing to carry', and its utility was superseded by the mobile phone. Having worn the TalkBand B2, and that space now being filled by the updated B3, I'm starting to get it. I think. 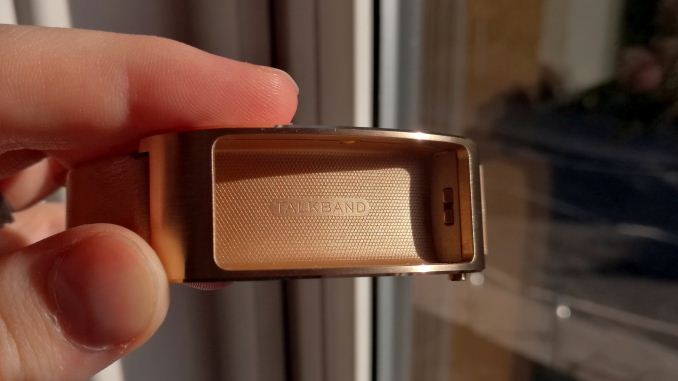 When I tested the TalkBand B2, a number of its features irritated me, such as the limited two-day battery life or the fact that the screen was incredibly bright at night, waking me up every time I turned over and the screen activated. The additional step counter, calorie burner and sleep monitor were interesting add-ons that provided a tale of being glued to my desk, or walking marathons during tech industry events, but these features have regressed in their utility over the initial fascination period. Now that I'm testing the B3, it's clear that there are some useful features for a watch that doesn't quite match the email facilities of a full Android Wear/Tizen device or an Apple equivalent, but it certainly gives more than a simple time telling mechanism. 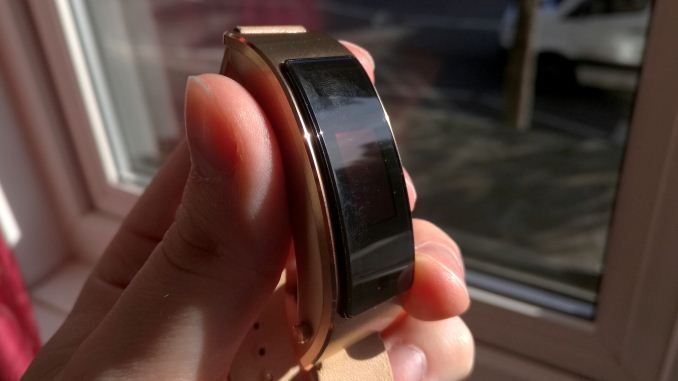 Smartwatches (or semi-smart watches like the B3) are still new enough that I am continually asked what it is like, or how I feel it compares. There's a list of pros and cons, but I find that above basic clock face, it currently augments my life in two very specific ways.

Firstly, as an early morning alarm clock. On my wrist is a device on which you can set a time (via the app) and it will detect when I am sleeping in a low REM/light sleep up to 30 minutes before that set time and wake me by vibrating. This has a twofold advantage: I don't wake up from a deep sleep which would make me feel groggy due to the REM detection, and as a vibration rather than audio, my partner next to me is not woken up by any noise (unless I accidentally step on a cat / Lego making my way to the bathroom and produce four letter expletives). This benefit of a device like the B3 sounds like a minor plus, but it works wonders if the user has a set time to wake or has an early appointment to make. Unfortunately the Huawei app only has a limitation – it only lets the user set one such alarm time for that 30-minute wake-window, meaning that subsequent alarms are fixed at specific times in case you really want to snooze. It shouldn’t be too hard for the software developers to add in at least one more, for those that don’t have a regular sleep schedule. 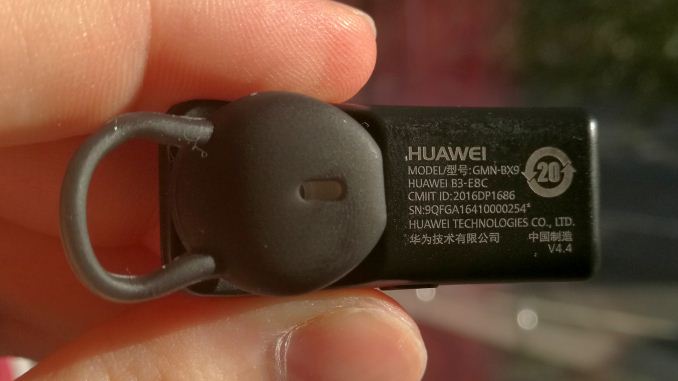 Second, the TalkBand B3 augments my life as a Bluetooth headset. To clarify, with this watch you can take out the module with all the electronics (you need to do this to charge) while still leaving the strap on your wrist. As a Bluetooth headset, I can listen to music in one ear while keeping the other open for other noises (door bell, cat yowl, pasta boiling over) without the need for a wire or a dangling ear piece. While under the noise of cooking, I can listen to a YouTube clip, or take a meeting as the headset is very clear and easy to speak through. Perhaps this is just the utility of having a Bluetooth earpiece, as I lose the ability to tell the time when it's in use, but as part of my smartwatch I'm finding I use it almost every day in that headphone role. It also acts as a quick response if you are getting a call and your phone is in a bag/under some papers/under the cat. (Admittedly the B2 had a similar feature but I immediately disposed of the silicone insert for my ear within minutes of taking it out of the box, thinking it was just to protect the watch during shipping, but with the B3 I have found a large number of uses.) Using the B3 as an earpiece does drain the battery quicker, but only noticeably if it is constantly in use for several hours a day, and the heavier the music the more battery it consumes.

For users moving from the B2 to the B3, there are a few upsides and downsides with the transition. The big upside is battery life - I'm getting 3-4 days from the TalkBand B3, rather than the 18-24hr battery anxiety from the B2. With a longer battery life and my anecdotally good charge profile with a solid bump in charge with a quick ten minutes, I never feel that worried about the battery like I did with the previous generation. It sounds weird, but the joy of not worrying about charging the device is a positive and I'm sure that 3-4 days is well on its way to not having to worry about it in general. I don't think I could manage an every-day charging watch, especially one that I can't charge at night for the sleep monitoring/alarm. 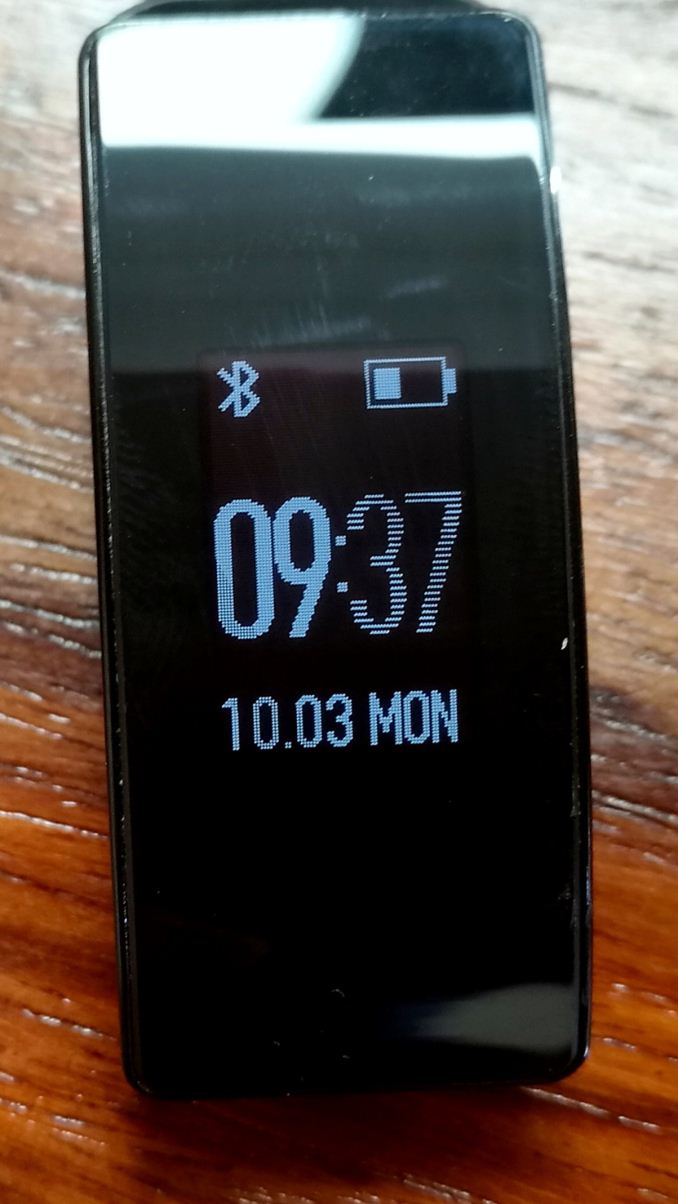 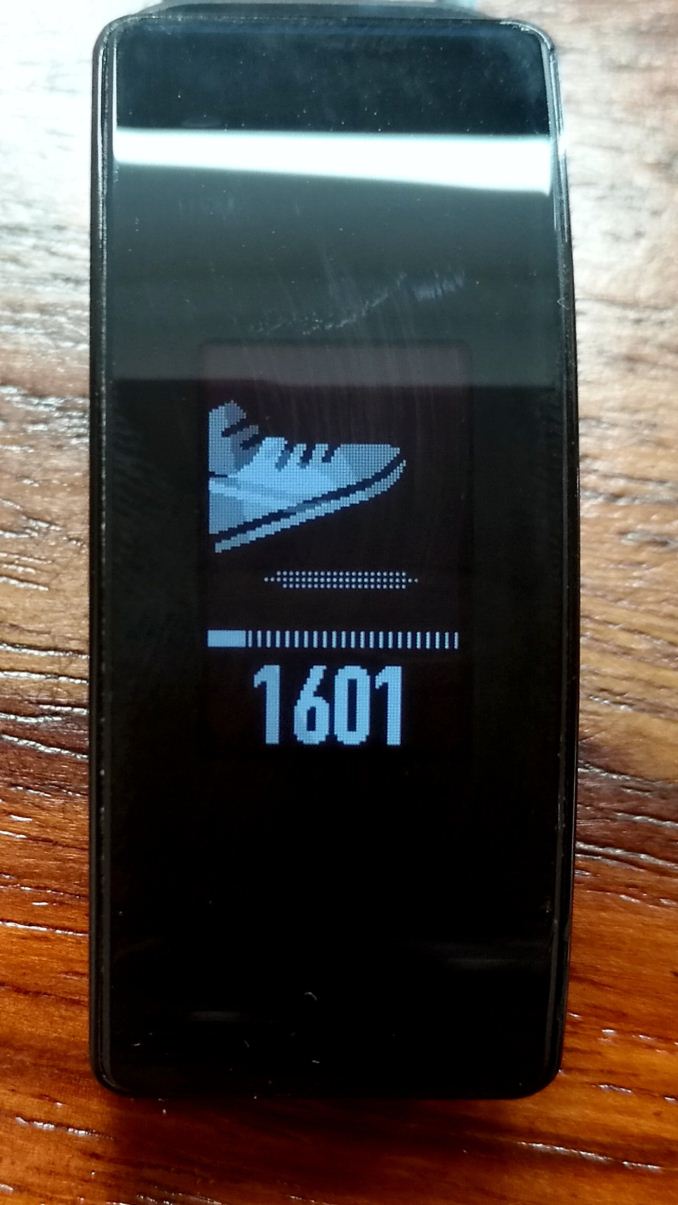 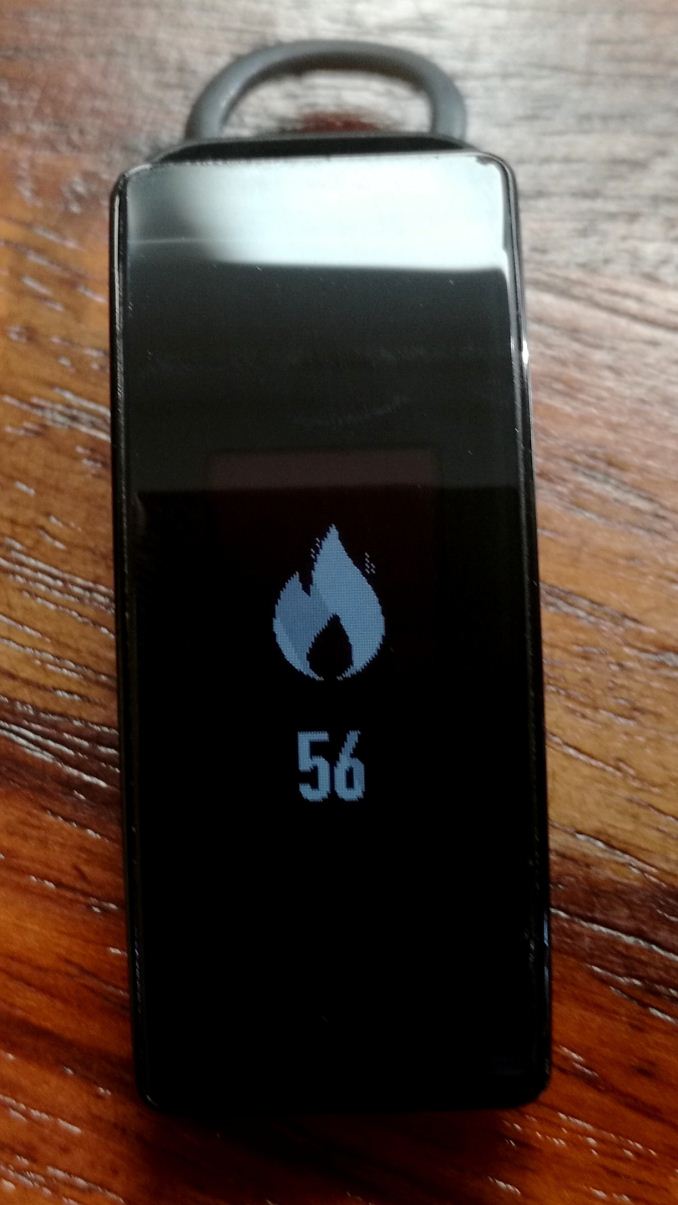 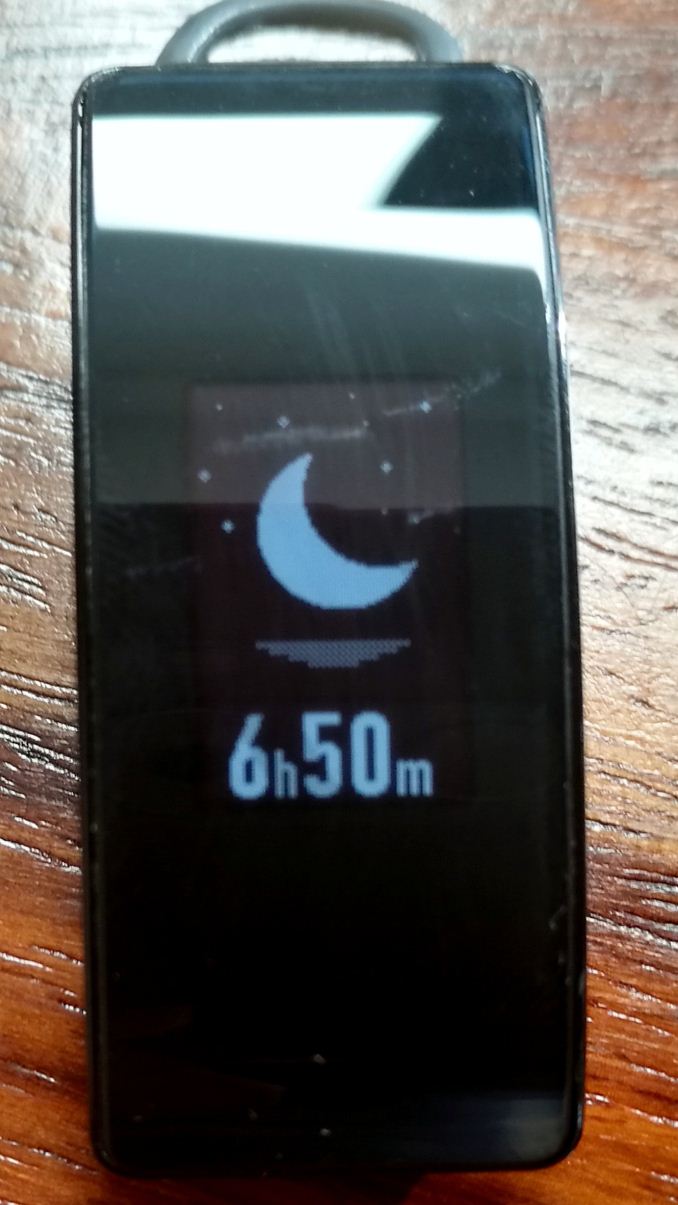 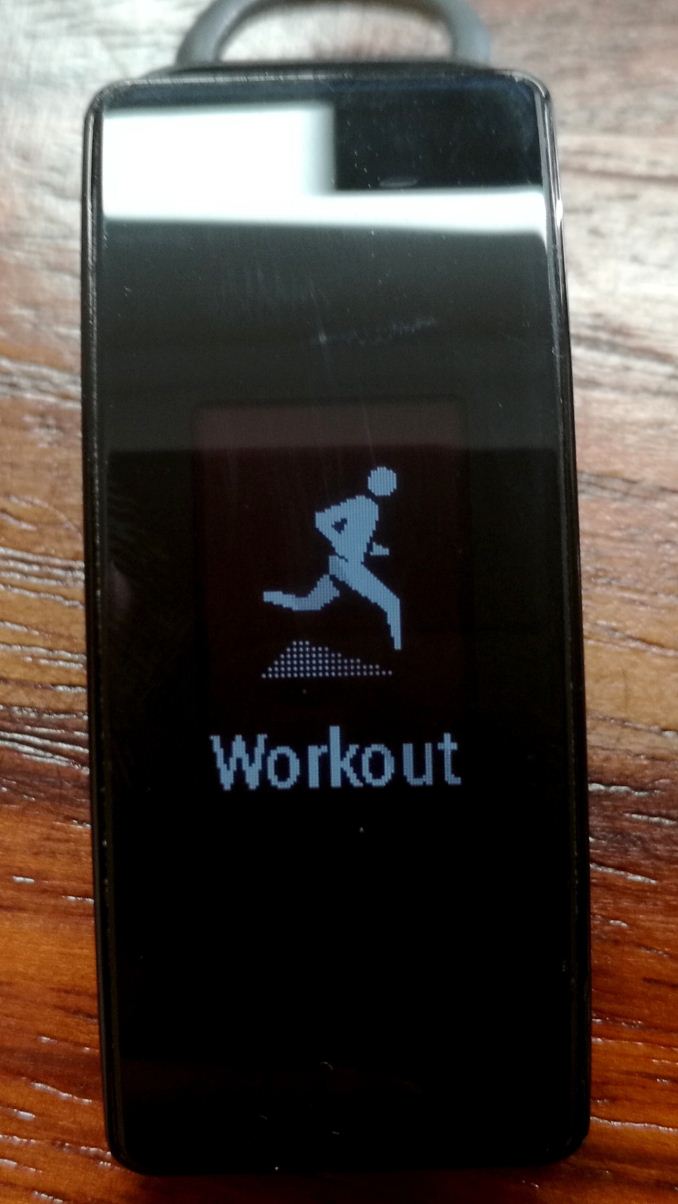 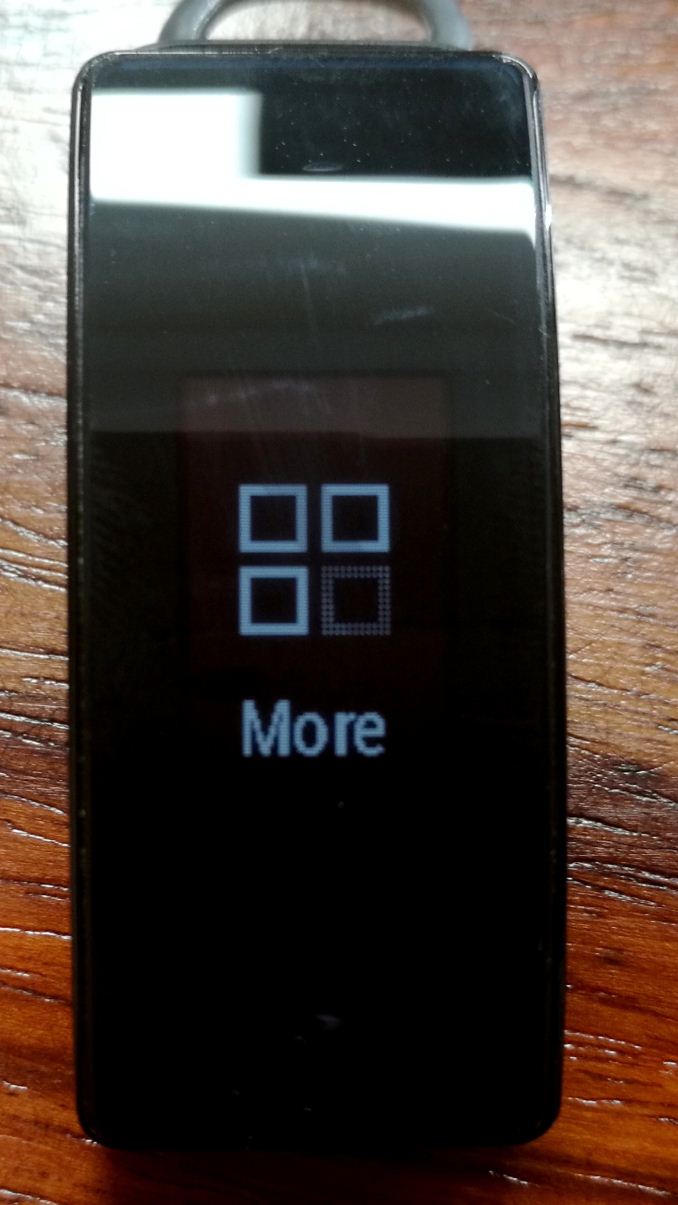 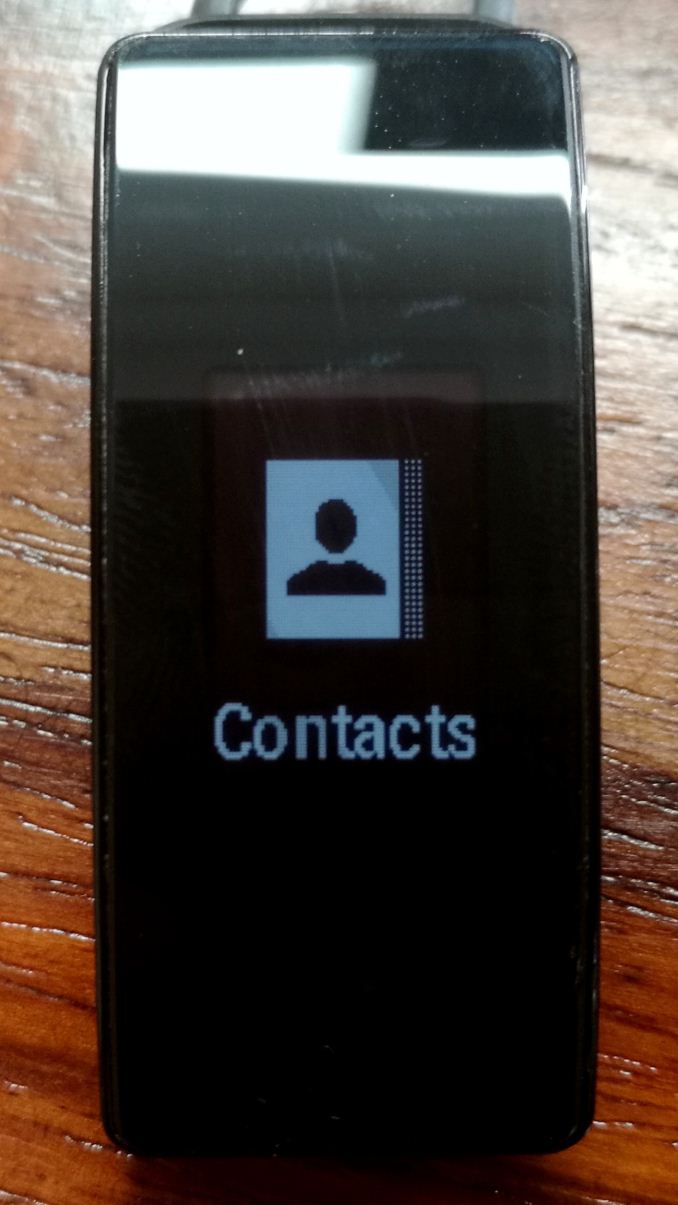 One of the downsides is the evolution of the interface. Previously on the B2, some functionality was reserved for long-hold button presses, but now this has been moved to menus or options within menus. So what previously used to be a carousel of four five screens (time, steps, calories, sleep, workout) becomes several more (options, contacts) and if the user is relying on a wrist flick to activate the watch, the flick will iterate through them – but if the B3 decides to quickly skip the time (thinking it’s a double flick), it's a much longer process to get back to the time if the other hand isn't free (or you forget to swipe the other way). This could be mitigated by having the steps, calories and sleep data all up on display at once - there's a lot of wasted space having these three as separate items which could all be condensed into one screen.

Another downside, which has hit me later in testing the device, depends on how often the user wants to use the app. So, my anecdotal use case is that I rarely use the app anymore – the novelty of making sure I’ve slept enough and seeing the daily progression has lost its charm. But the other night, as I was getting into bed, I wanted to change the alarms on the watch. To do this it requires loading the app and making the adjustments. However, the Huawei Wear app has its own internal update system for software/firmware. It will not let you adjust anything without updating first, which is a slow five-minute process between the watch and the phone with two bright displays - when the immediate goal is just to go to sleep. Huawei needs to do one of a few things here - have a schedule to auto-update the firmware in the background after loading the app, and ensure the reboot the update requires doesn't cause the smart watch to vibrate. Or, auto-update the device after 5 minutes of charging. It's a small inconvenience, but when you really just want to go to sleep and change an alarm, it sticks out like a sore thumb. 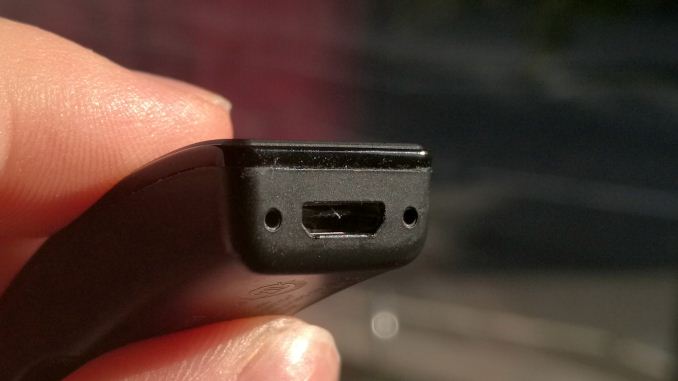 The software still remains a neutral point in the Huawei Wear ecosystem - it has gone through a few updates since our B2 experiential review, but it remains similar with steps and sleep with monthly or daily reports for viewing. Up until fairly recently, the software introduced a bug where daily step count profiles would not show for some reason, even though the data was there. That seems to be fixed now (sometimes it requires waiting 60 seconds), but ultimately Huawei does need to step up (pun intended) the potential data offering here. Being able to see per-day sleep cycles in a text format would be easier than the image below: 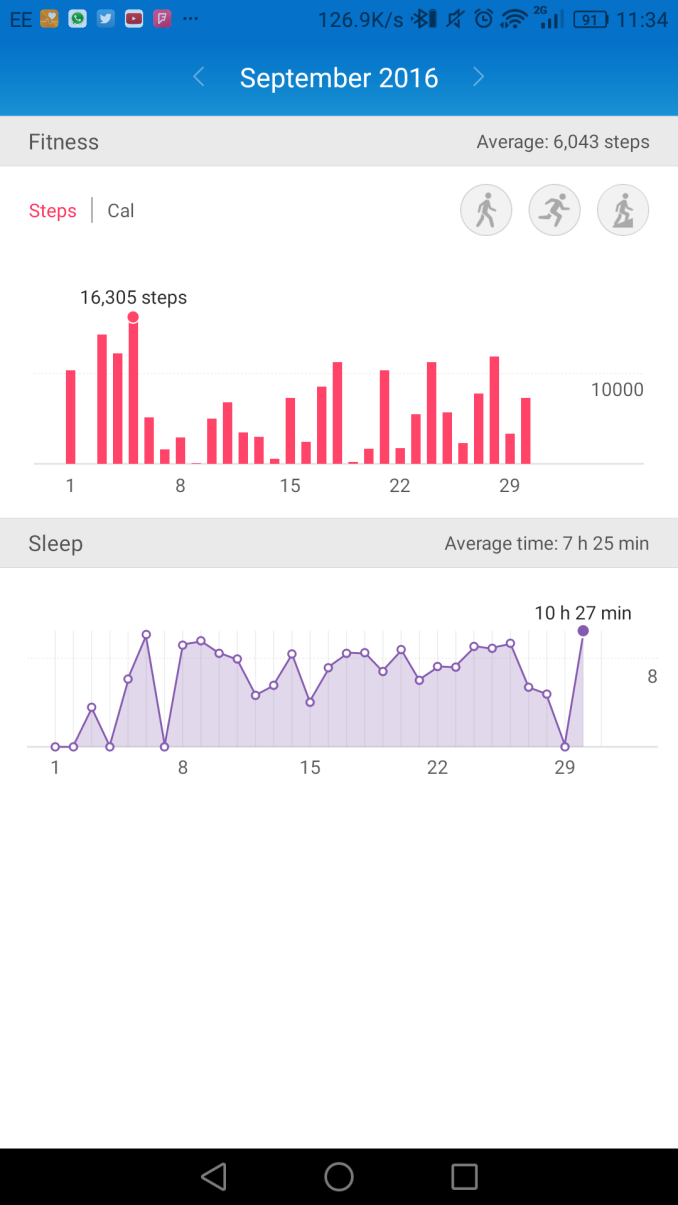 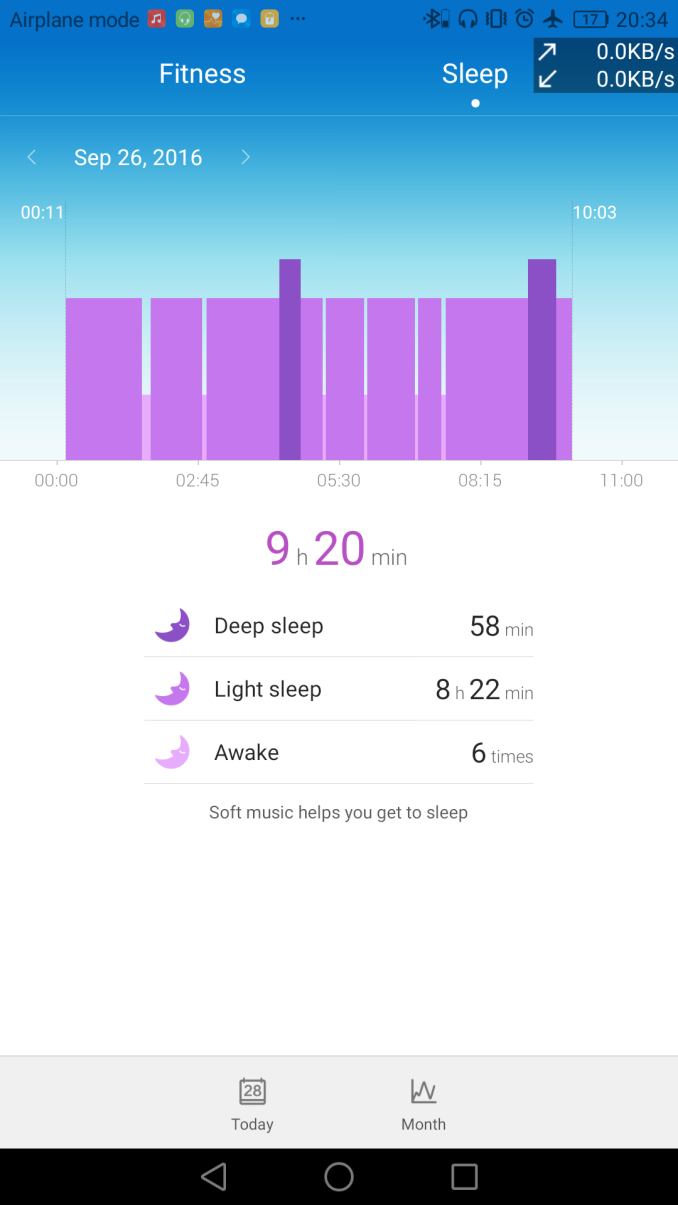 Also, some of Huawei's devices come with their own Health app which tracks steps for the user that carries the smartphone on them. The health app at least gives some indication that my 6867 steps so far today constitutes 374.2 kcal, equivalent to ~2.5 bowls of ice cream. That's the sort of tangential information which makes data gathering like this interesting, but here Huawei has two apps that don't talk to each other, with different features. I'd hazard a guess that this is a function of two separate software teams internally in different business units with little crossover. 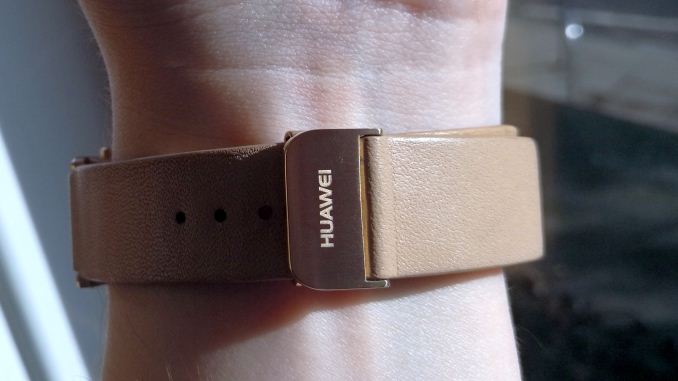 The final point to discuss is the look. While the B3 looks refined, compared to the B2 it feels like a slight regression. The black plastic module is clearly a separate part of the housing, and creates a mismatch of aluminum and plastic with a large bezel on the screen. This is in contrast to the B2, which has a full unified metal body implementation, and blends seamlessly with the rest of the device. There are advantages to doing it the B3 way one would assume (cost comes to mind), but as an aesthetic package, I'd have to give the nod to the B2. I can confirm however that the B3 can take a trip through tomato sauce and still work after cleaning (it fell out of my ear at a hotel breakfast one morning). There's also a small minor thing of the strap that came with this unit: it's starting to already break away from the main metal housing: 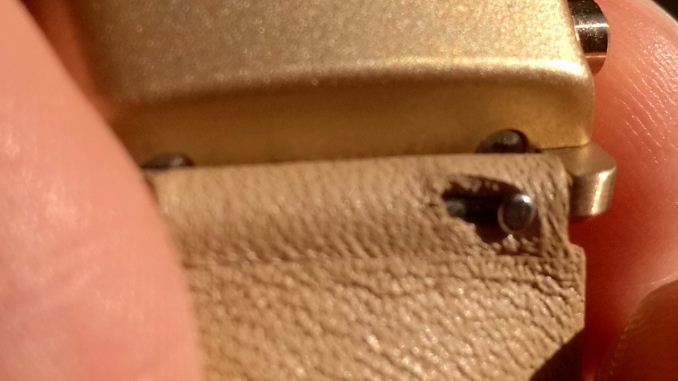 Despite the issues, I'm finding myself using the B3 more and more as a personal alarm clock, a Bluetooth headset for meetings, and even as a one-eared headphone for music when I need to keep the other ear unobstructed. I'd love to see a light sensor and brightness toggle, preferably as a physical button, and a base camera that detects a face in front of it and turns on automatically. Whether these are possible with the same or better battery life would be interesting to see. The battery life is the biggest upgrade, and another successive jump in the same direction would be icing on the cake. The interface, while improved, still has issues and Huawei needs to integrate the various parts of the business in order to provide a unified user experience, especially if a user goes all-in with the brand. But I'm sitting here, writing this on an airplane, with music playing in one ear on a device that's easy to put away when needed. I'm certainly seeing the appeal of this sort of smartwatch.

Gallery: The Huawei TalkBand B3

The Huawei TalkBand B3 is currently listed over at Newegg, starting at $286 going up to $520. Compared to the Samsung Gear S2, which starts at $269, it's clear that Huawei is aiming for the same market but without the full-color display and an integrated experience, and instead is going for the Bluetooth headset angle for a similar price range.