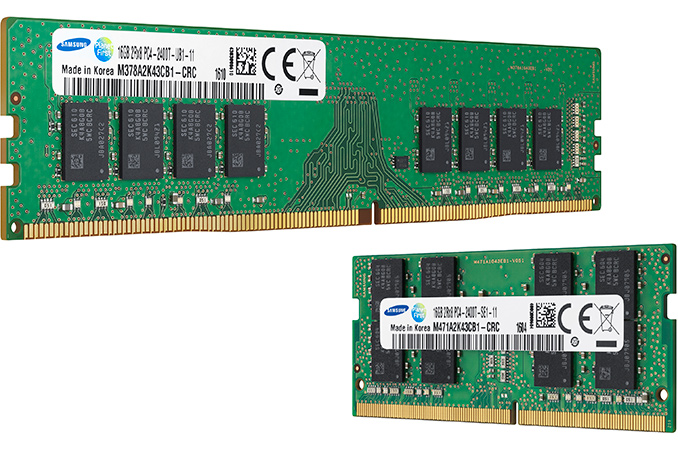 Samsung Electronics has started to manufacture DDR4 memory using its new '10nm class' production technology. '10nm class', by definition, implies sub-20nm but without fully disclosing the methodology, similar to the first sub-20nm NAND production that used 1x/1y terminology. By using a sub-20 nm fabrication process, this typically helps a company make ICs/DRAM cheaper, faster and more energy efficient, depending on the process complexity. In this case, Samsung continues to use ArF (argon fluoride) immersion lithography tools with quadruple patterning to make its latest memory, which indicates a very high complexity of the new process tech. What is also important is that the new DRAMs feature Samsung’s new memory cell structure.

In the news today, Samsung’s new DDR4 memory chips are produced using 10nm-class manufacturing technology, have 8 Gb capacity, and can operate at 3200 Mbit/s data rate (DDR4-3200). In addition, the new DRAM devices are reported to consume 10 – 20% less power than equivalent DDR4 memory ICs made using a 20 nm fabrication process, based on tests conducted by the memory maker. Finally, Samsung can produce 30% more 8 Gb chips on a single 300 mm wafer thanks to the new manufacturing technology, which will lower their costs once their yields match those of current-gen chips due to having more chips per wafer.

Samsung does not disclose many details about its production process, such as its smallest half-pitch size (which gives actual names to DRAM manufacturing technologies, such as 20 nm or 25 nm). What we do know is that the new tech stacks very narrow cylinder-shaped capacitors on top of transistors, which implies a new DRAM cell structure (4F2?). Manufacturers of memory have historically changed the structures of DRAM cells every five or six years, and each change represents a major technology challenge as the density changes. Samsung says that it has refined the dielectric layer deposition technology and enabled substantial performance improvements, which may mean that the new memory chips can have a higher clock-rate potential than Samsung’s existing DRAMs, or more units will pass the base tests. If this is the case, if we extrapolate, this may open doors to DDR4 memory modules with unprecedented data rates (e.g., higher than DDR4-4400). Nonetheless, use of quadruple patterning significantly increases the complexity of manufacturing, which may somewhat slow down the ramp up of the new memory ICs and cause delays in increased yield refinements.

Samsung claims that later this year it intends to use its 1x nm manufacturing technology to make LPDDR memory with increased capacity, which should help makers of smartphones, tablets and notebooks boost the amount of DRAM inside their devices or reduce pricing.

Use of the sub-20 nm process technology to produce 8 Gb DDR4 chips should make such DRAM ICs cheaper (eventually), which will help PC and server makers to install more memory without increasing prices of their products. At press time, one 8 Gb DDR4 chip costs $4.688, according to DRAMeXchange. By contrast, a 4 Gb DDR4 IC is priced at $1.672. Therefore, using low-capacity chips is still cheaper than using high-capacity DRAM devices. Meanwhile, if you are building servers, you might not have a choice but to utilize 8 Gb chips to create high-end memory modules (i.e., with 128 GB capacities). For that reason, for server manufacturers, Samsung’s new 8 Gb DDR4 chips should be useful.