One of the areas where Crucial has been lacking is the software. Nearly every SSD vendor provides some sort of software/toolbox for its SSDs nowadays, but until January Crucial had been the exception to the rule. I discussed this with Crucial/Micron last year and they understood their weakness on the software front, and also disclosed that there's a toolbox in the works. At CES the curtain was finally lifted when Crucial released its own toolbox called the Storage Executive. 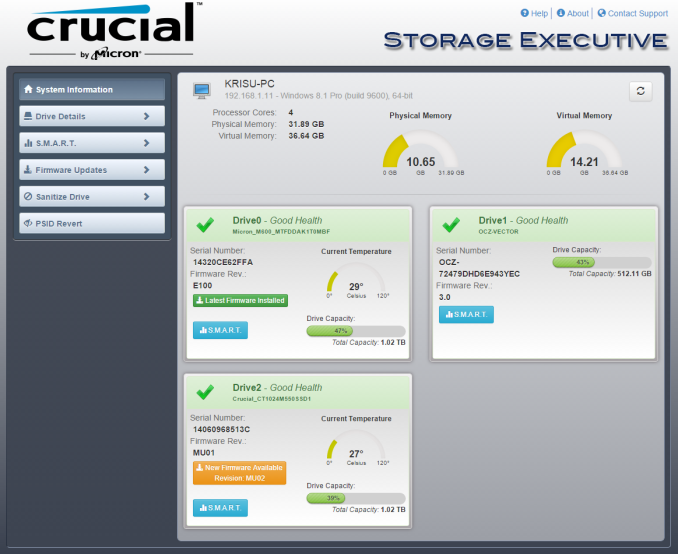 Unlike the other toolboxes we've seen, the Storage Executive runs in the default browser. However, it still comes as an installer (which is quite large at 147MB for the 64-bit version) and has to be installed, but instead of running as its own window the Storage Executive utilizes the default browser for the interface. Since I'm not a software developer, I'm not sure if this is easier to implement versus a separate window, but honestly it doesn't really matter because a toolbox isn't something you need to keep open at all times, so Crucial's implementation works just fine for when it's needed.

The welcoming screen that's shown above shows the common tidbits of data that nearly all toolboxes show. This includes general information about the system such as the operating system and the amount of memory, along with slightly more detailed information about the installed drives (serial number, firmware version, temperature and used capacity). 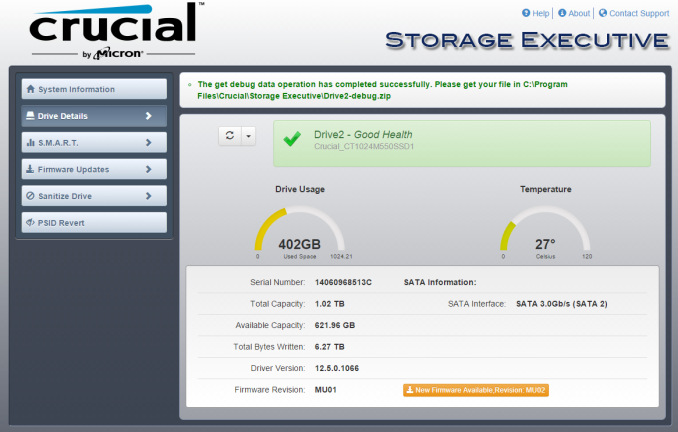 The 'Drive Details' section shows more details about the drives, including the interface and driver version, but honestly it could use some additional details (e.g. life remaining). The drop-down button next to the refresh icon includes a 'Get Debug Data' feature that saves the drive's and system's data to a ZIP file that can then be sent to Crucial's support team for remote analysis of the drive and its potential issues. 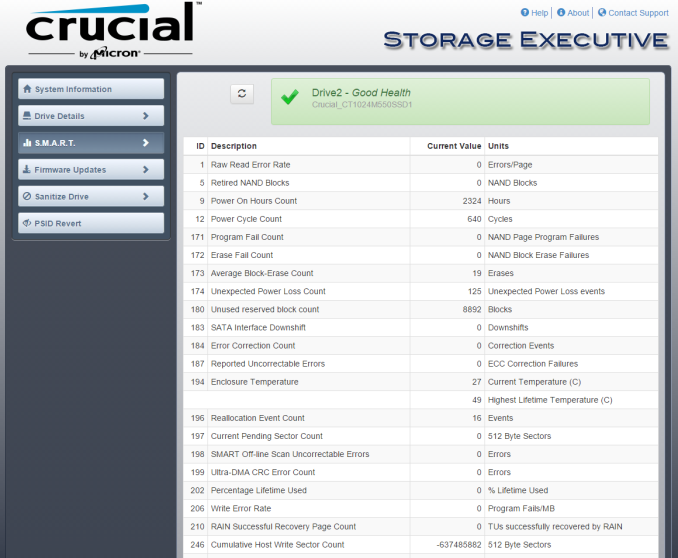 The SMART tab includes the usual SMART data that can be read by numerous utilities. 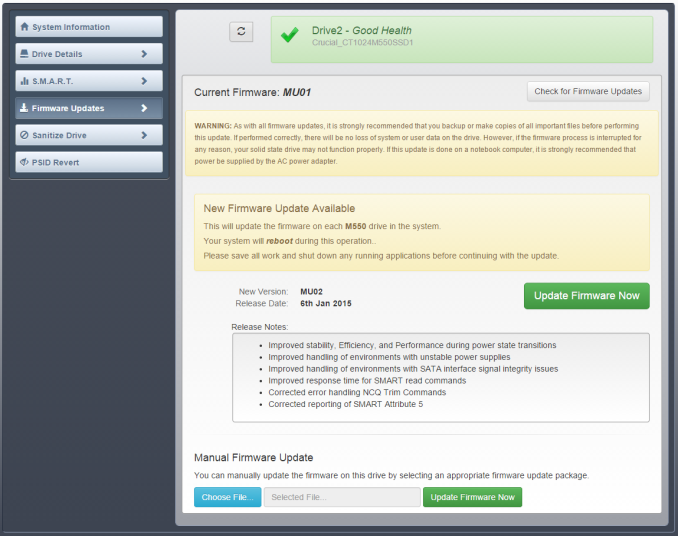 The ability to easily upgrade the firmware is probably the most important feature in a toolbox and the Storage Executive is pretty straightforward with that. It automatically checks for updates and also features the release notes, so the end-user will know what has been changed in the newer firmware.

Drive sanitation is Crucial's code name for secure erase command, which will return the drive back to its factory state (i.e. all blocks are erased). There's also a PSID revert function that can be used to revert a TCG Opal encrypted drive back to unencrypted state using the physical security ID (i.e. PSID) that's printed on the SSD's label, which is very handy if you're dealing with encrypted drives because in case you lose the encryption key the drive will essentially become a brick as there's no way to access it. Obviously, PSID revert will erase all data in the drive, but the drive can then be repurposed. I did confirm that the PSID revert works and it doesn't require anything else but the PSID on the label.

All in all, from a functionality perspective, the Storage Executive is Crucial's first attempt at a software package, and it shows. It lacks features compared to what Samsung and Intel have at the moment, but it does offer the necessary features that one needs for troubleshooting and maintenance. That said, since this is the 1.0 version, there will be more features added in the future that should bring the Storage Executive closer to what the competitors are offering today.