Thunderbolt's adoption, till now, has mainly been driven by the Mac ecosystem. Solutions for DIY PC enthusiasts are not widespread. GIGABYTE has a few motherboard models with Thunderbolt integrated, while Asus's Thunderbolt-capable motherboards need an add-on PCIe card. Our Windows-based testbed for direct-attached storage (DAS) systems is based on the latest Z97 chipset from Intel. The build originally started out as a multimedia editing machine. The requirements of a DAS testbed fit in nicely with the original purpose of the build. The following table details the configuration of our testbed.

We decided to prepare the testbed with 32 GB of memory in order to make a large enough RAM drive available for our file copy tests. Similar to our NAS testbed, we used OSFMount to allocate 20 GB of the DRAM for a RAM disk partition. 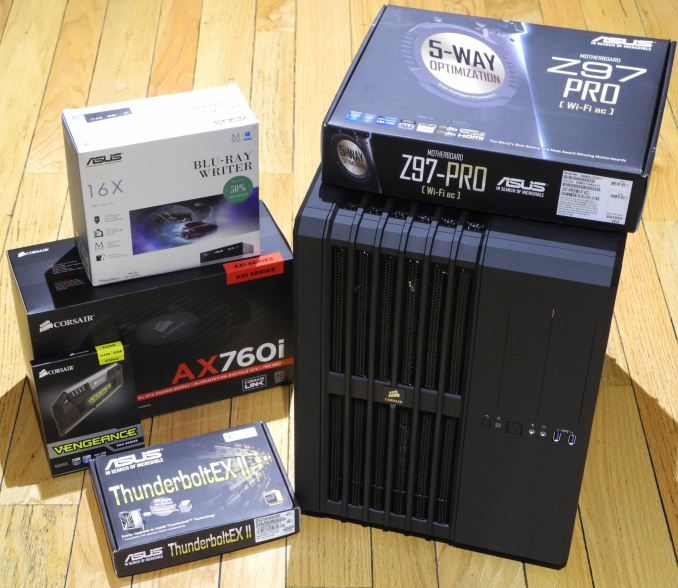 The internal layout of the Z97-Pro (Wi-Fi ac) board is presented below. 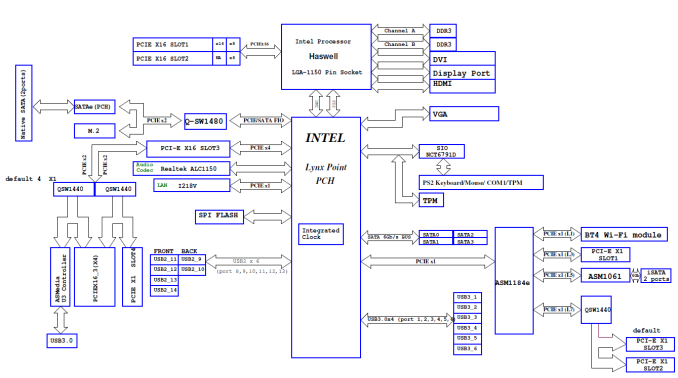 It should be noted that the Thunderbolt add-on card can only be connected to PCIe lanes hanging off the PCH (and can't be connected directly to the CPU). Apparently, this is a requirement for vendors to obtain Thunderbolt certification from Intel. In the above layout, we see that the add-on card can only go to the bottom PCIe slot (PCIEX16_3). In addition to the hardware restriction, the BIOS actually operates this slot in x1 mode, with the other three lanes being shared with the ASMedia USB 3.0 ports in the rear panel and the x1 PCIe slot (PCIE X1 SLOT4). The BIOS setting was altered to operate the x16 slot in x4 mode (maximum possible bandwidth for the card). The BIOS entry also has a PCIe cache line setting for Thunderbolt. It was left at 32 bytes (the default) for our evaluation.

Our testing methodology for DAS units takes into consideration the usual use-case for such devices. The most common usage scenario is transfer of large amounts of photos and videos to and from the unit. The minor usage scenario is importing files directly off the DAS into a multimedia editing program such as Adobe Photoshop.

Usually, PC Mark 8 reports time to complete the trace, but the detailed log report has the read and write bandwidth figures which we present in our performance tables. Note that the bandwidth number reported in the results don't involve idle time compression. Results might appear low, but that is part of the workload characteristic. Note that the same CPU is being used for all configurations / will be used for future DAS reviews. Therefore, comparing the numbers for each trace should be possible across different DAS units.