The concept behind this system is simple - the best balance of high frame rates and a reasonable price.

Processor - AMD Duron 850 - $75
The Duron is perfect for our Value Gaming system since it performs within 5 - 10% of the regular Athlon. If you feel like overclocking, the Duron 850's that we've tested have run at 900 - 950 MHz by simply boosting the voltage and changing the clock multiplier. Of course, overclocking AMD's Socket-A CPU's, including the Duron, has been the center of much controversy, but it's quite easy with the right motherboard and the correct information. For full details on overclocking the Duron, read our latest AMD Socket-A Overclocking Article and the "What to look for in a KT133 Motherboard" section of our Socket-A Motherboard Roundup for August 2000. Using a KT133A motherboard, you can push the front side bus up to 133MHz for a further performance boost.

If you feel like spending about $25 more, you can get a Athlon 850, but you'll still be limited by the memory bandwidth of your video card at higher resolutions, so we decided that the extra cache really wouldn't help that much in games. As far as overclocking goes the Thunderbird also tops out around 900 - 950 MHz.

For more information on all Duron processors, read our AMD Duron 900 Review.

Motherboard - EPoX EP-8KTA3 - $130
With the release of the KT133A chipset from VIA, we finally see something new in the Socket-A motherboard arena. The KT133A is the second chipset to offer official 133MHz FSB support for AMD's Socket-A CPU's. That 133MHz FSB is key as it allows the KT133A to provide performance very close to that of DDR SDRAM on the AMD 760 chipset, but does so with much cheaper PC133 SDRAM. 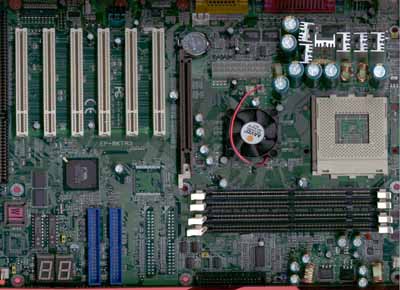 Since KT133A motherboards don't cost much more than KT133 boards, and because the performance boost can easily be acheived on a 100MHz FSB Socket-A CPU if you're willing to overclock a bit, it's only natural that we'd recommend a KT133A board for this system. Of course, it doesn't hurt that it also gives you a better upgrade path for the future.

While we've yet to have a KT133A motherboard roundup, we have looked at quite a few such boards. So far, the EPoX EP-8KTA3 seems to offer the best compromise of stability, features, and price fo ra system like this. Multiplier overclocking options are included via right in the BIOS and there are even a few FSB speeds to choose from to tweak things further.

For more information, read our EPoX EP-8KTA3 Review and VIA KT133A Chipset Review.

Memory - 128MB Nanya/Mushkin Budget PC133 SDRAM - $40
While we can't point you in the direction of our usual recommendation of 128MB Corsair PC133 SDRAM due to cost, Mushkin's Budget PC133 SDRAM which we included in our latest PC133 SDRAM Roundup actually makes use of NANYA SDRAM chips which happened to work fairly well as you can see from our roundup.

Video card - NVIDIA GeForce2 MX - $90
This month, NVIDIA GeForce2 MX based cards continue to be our choice in the value gaming system. The newly released Radeon VE is a GeForce2 MX competitor, but is only marginally less expensive, does not include T&L, and performs quite poorly compared to the GeForce2 MX. It's HydraVision dual monitor support is better than the TwinView setup from NVIDIA, but that's not enough to win us over our value gaming system. The Kyro II, on the other hand, does offer quite a bit of performance at a cost that's not too much higher than the GeForce2 MX. However, it was not available at the time of publication of this guide, so it is technically not eligible to be chosen here. Further, we'd like to put the Kyro II through it's paces a bit more before recommending such a new and vastly different technology. The newly released GeForce2 MX 400 offers no performance gain over the original MX but costs more so there's no reason to pick it either.

Read our for all the details.

Monitor - CTX VL950SL - $300
Monitors are one of the few computer components that you can usually hang onto for years to come. With that in mind, we didn’t want to go with anything smaller than a 19” on our value gaming system - besides, once you’ve gamed on a monitor this big, there’s no going back.

The best deal we could find on a 19” monitor was the CTX VL950SL, which will run you about $300. It’s a shortneck model that uses the same 0.26 mm dot pitch tube that many of the bigger brands use. For a bit more, just about every monitor manufacturer is offering a value 19" model that would fit the bill.