Superficially the SilverStone Temjin TJ08-E looks like a simple, clean brushed aluminum mini tower with design cues that wouldn't seem out of place on a Lian Li enclosure. There's a single large vent on the front for the intake fan, two USB 3.0 ports, the standard mic and headphone jacks, and two 5.25" external drive bays. At the bottom is even a 3.5" external bay, although the placement seems a little awkward and the cover rotates a bit in the bay. Still, if you're not interested in putting a floppy drive or card reader in, internally that bay will support an additional 3.5" drive. When you get to the top of the case you'll see the typical top vent, but that vent really is anything but typical.

Your first clue that everything in the TJ08-E is a little topsy turvy is going to be when you look at the back and realize that everything has been flipped: the motherboard mounts to the opposite side of the enclosure, and the power supply bay is at the top and designed to mount the PSU upside-down. There's a major benefit to all this, though: the motherboard is now lined up behind the front 180mm intake fan.

Opening the enclosure is a three part process. Both side panels are secured with thumbscrews and you'll want to remove them. The top panel of the TJ08-E also comes off, and this is something I really wish SilverStone had simplified: you have to remove six screws to take it off, and when you're installing hardware you will need to have it removed. 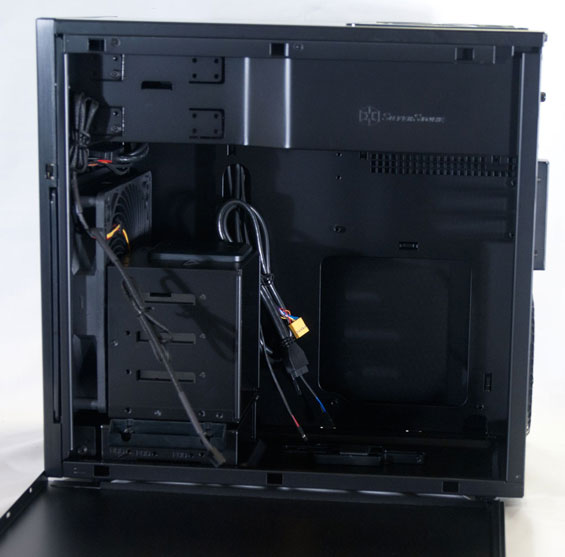 Once you're inside you'll be met with a fairly generous amount of space behind the removable motherboard tray; that removable tray is a nice enough touch and SilverStone recommends you remove it during installation, but during assembly I actually found that step was unnecessary. There's a decent-sized backplate cutout in the motherboard tray and a few holes surrounding it for routing cables.

There are also two drive cages stacked on top of each other; the top one is intended to support four 3.5" drives and is lined with a soft material to dampen vibration. I'd prefer if the drive cage were rotated with the drive ports facing the back to simplify cable routing, but space is really at a premium inside the TJ08-E with everything SilverStone packed in here. Below the top cage is a second cage that can be used to house an external 3.5" drive or an internal one, and then below that are four holes in the bottom of the enclosure used to mount a 2.5" SSD.

SilverStone also includes two features of potentially questionable value, though I think they're really ideal more for shipping than anything else, and they certainly don't hurt. There's an adjustable support on the bottom of the enclosure for larger coolers to reduce stress on the motherboard (the standoffs of which are built into the motherboard tray, thankfully), and then the top of the drive cages is raised and flat in such a way that it can support longer graphics cards to reduce stress. SilverStone includes a rubber pad that can be affixed to the cage to close the gap, too, preventing vibration in the process.