I’d like to put a huge, huge shout out to Khoa Tran (theguynextdoor on the AT forums), who sent us his personal Envy 14 system for a couple of weeks just so that we could review it. HP never managed to get one to us for review, so Khoa coming through for us was an awesome move. It just goes to show how great our readership is—seriously, we love you guys. 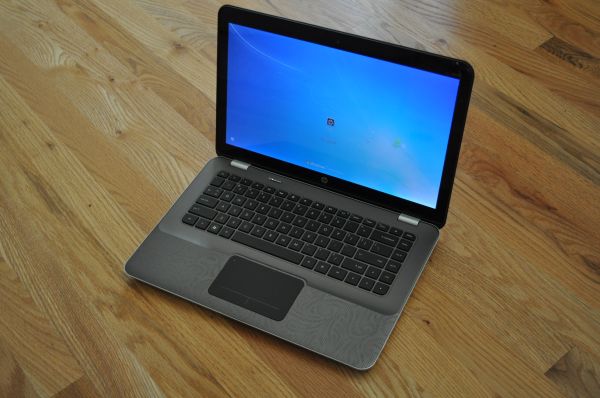 So, on to the Envy. The Envy 14 is part of the second generation of Envy notebooks. It slots in nicely between the first gen 13” and 15” Envys, replacing both in one go and creating space for the range-topping Envy 17 we reviewed recently. And as we’ve mentioned previously, it’s a decently powerful notebook. Inside, we find Intel’s first generation Core i5 and i7 processors, ATI’s HD 5650 graphics card, a minimum of 4GB RAM, and the best screen of any notebook on the market. Unfortunately, that screen isn’t available anymore, but we’ll get to that in a bit.

So here's the part we all know—the styling is pretty derivative of Apple’s MacBook Pro line. But while the lines are similar from afar, up close the Envy isn’t actually as close to the ever-popular Apple portable as it first seems. The textured aluminum on the lid has an interesting, swirled pattern, and the slightly convex palm rest is rendered in the same material. Overall, the industrial design is quite good, and the build quality is just as good as one could expect from an aluminum-bodied notebook. It’s not quite on the level that Apple has reached with the MacBook Pro line, but it’s getting there.

That’s a pretty common theme with the Envy 14—it’s like HP’s take on the Apple formula. The backlit chiclet-style keyboard looks and feels nearly identical to the MacBook Pro’s keyboard. If you’ve used a unibody MacBook Pro, you know that’s a good thing. Unfortunately, HP still hasn’t figured out how to make a buttonless trackpad work. Far too often, you move the cursor to where you want it, and when you go to click in the designated part of the touchpad, the cursor ends up on the other side of the screen. You get used to the touchpad in the Envy, but it can be aggravating. But the best part of the entire package is the screen.

HP’s 1600x900 Radiance display is a revelation, no way around it. The max brightness is 331 nits, with a black level of 0.325 nits. That works out to a contrast ratio of 1018:1. The first time I saw that, I ran the numbers through the calculator a second time to make sure that was actually right. If I’m not mistaken, it’s the highest contrast ratio we’ve seen on any notebook screen to date. [Ed: ASUS' G73J series managed about the same, but with a max brightness of 184 nits the Radiance display definitely gets the win.] Take that, Apple. Unfortunately, that screen is no longer available.

Back in September, we heard whispers that the screen was sold out, and HP removed the option from the Envy 14 ordering system. The option came back briefly in January, and we were then told that the Radiance display was sold out for good. So, if you want an Envy 14, you’re going to be stuck with the standard, mediocre 1366x768 panel.

Performance-wise, it’s around the same as other notebooks that have the Clarksfield/HD 5650 combo underhood. It’s not an uncommon combination, but for a 14” system it’s definitely on the higher side of the performance scale. It’s about on par with the XPS 14, as you can see in Mobile Bench. Battery life is basically identical across the board, but the comparison really shows what you give up with the standard LCD over the upgraded panel.

I’d assume that HP is updating the Envy 14 to Sandy Bridge in the near future (the 17 has already been upgraded), around the same 2-3 month time frame as the Dell XPS line. Unlike the XPS 14, the Envy 14 is a lock to be around for a long time to come—it’s been a huge seller for HP and it’s easy to see why. I enjoyed my time with it as much as I enjoyed the MacBook Pro last year, though a large part of that was due to the amazing display. But as much as I loved the Radiance display, I must acknowledge that the rest of the notebook is quite good. The industrial design and build quality are among the best for mainstream PC portables, and the price-to-performance ratio is quite good as well. For a starting price of just under a grand, you get a solid amount of stuff—2.66GHz Core i5, the HD 5650, 4GB memory, and a 750GB hard drive. If only the Radiance display was still an option.