The firmware on the Z490 Taichi is very similar to what we've seen previously from ASRock, including in our ASRock Z390 Taichi review. The main difference comes in the GUI with a cleaner and more aesthetically pleasing look. It includes a black background with an ASRock Taichi cogwheel inspired logo on the right-hand side. The ASRock firmware is using which text with grey highlights, including a sky blue highlight along the top menu when navigating around various areas of the BIOS. 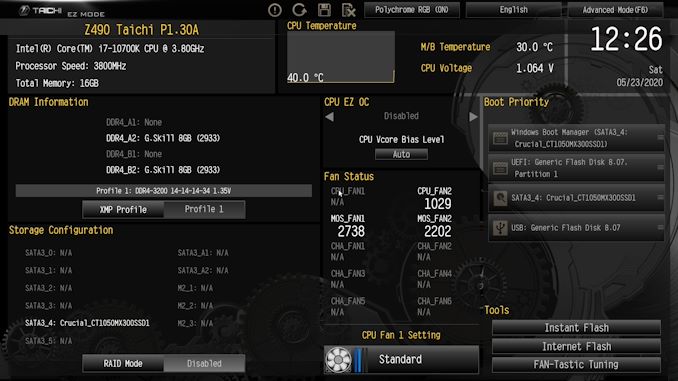 Note we tested performance with the latest version 1.50, there were no visual differences 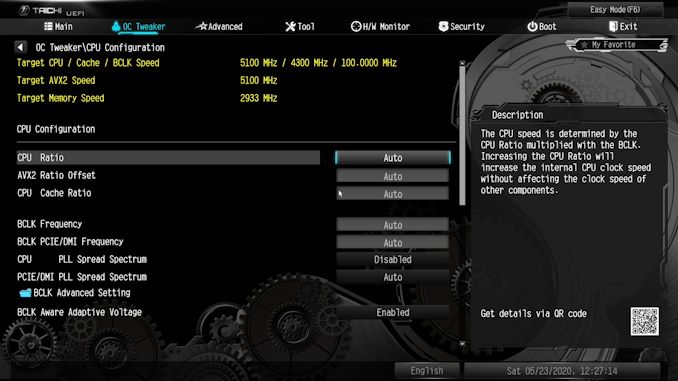 Along the top, there are eight different menus including the OC Tweaker, Advanced menu options and tools menu including ASRock's Polychrome RGB software which has a very user-friendly GUI. The H/W Monitor section allows users to view temperature information for a plethora of sensors within the CPU and around the board, as well as fan speed information. This section also includes ASRock's FAN-Tastic Tuning utility where users can set custom fan profiles, or allow the firmware to do the work via optimization. 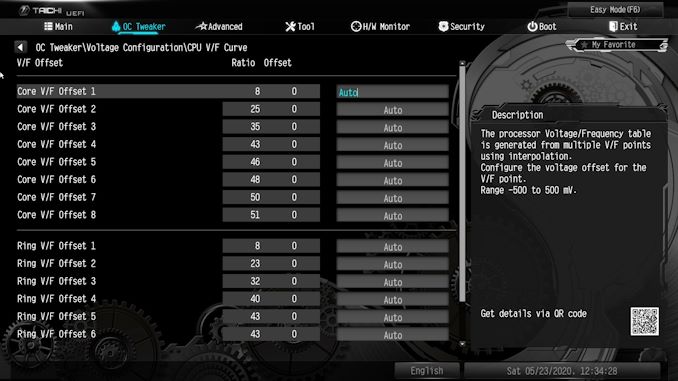 Within the OC Tweaker menu, users can overclock both the CPU and memory, as well as the integrated graphics on Intel's Comet Lake desktop processors which feature it. ASRock has included a wide array of options for overclocking the CPU including core frequency control, ring frequency and for users who wish to do so, base-clock (BCLK) frequency. There is also a wide variety of memory overclocking options including frequency, latencies, and the ability to enable and disable XMP 2.0 profiles on memory kits that are supported. Further in the OC Tweaker is a dedicated section for voltage control, with a lot of voltages the regular user wouldn't need to touch. Finally, the OC Tweaker includes Intel V/F curve controls for users looking to leverage the technology for better control over turbo speeds.

Overall the firmware on the ASRock Z490 Taichi is easy to navigate and has a large collection of customizable settings for tweakers and overclockers to play with. Using the firmware which came preinstalled onto the board (1.30), it was a little laggy and unresponsive sometimes. This issue was fixed when it was flashed to the latest version at the time of testing (1.50). ASRock is good at organizing sections within the firmware with individual sections for CPU, memory, and voltage settings within the OC Tweaker menu. There is also plenty of memory latency timing customization which is good as the memory controller on Intel's Comet Lake seems to be stronger than previous generations.

Supplied with the ASRock Z490 Taichi is an adequate and unassuming selection of software utilities which is spearheaded by its A-Tuning software which allows users to overclock and tweak within Windows. Also included is ASRock's Polychrome RGB software, ASRock's advertisement and gambling ridden Live Update and App Shop application, as well as a Dragon 2.5 G utility for traffic shaping. 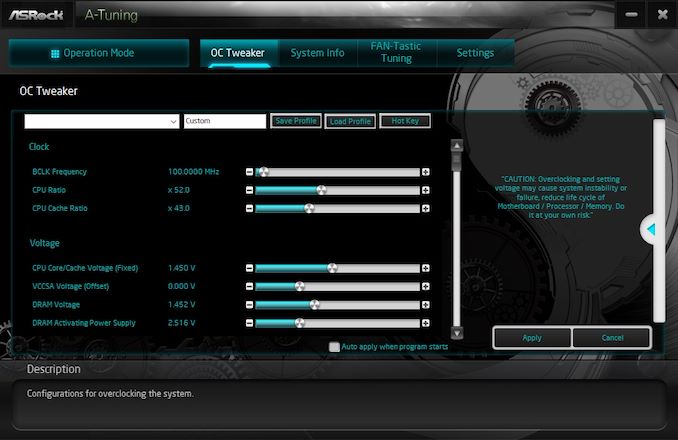 The most prominent piece of software supplied with the ASRock Z490 Taichi is the A-Tuning utility. This allows users to overclock the CPU and base-clock within Windows, as well as make voltage adjustments in real-time. There are three preset modes, performance mode which mirrors Window's own power plan when in high-performance mode, while both standard mode and power-saving have less aggressive settings.

ASRock's software suite which is included with the accessories bundle, or via the official product page on the ASRock website, is more than enough without diluting it down. The ASRock Polychrome RGB utility allows users to turn a system into a mobile disco, while the Restart to UEFI software allows users to enter the BIOS upon the next boot, which is really handy if you're not quick enough at spamming the F2 key. The Live Update and App software offers some functionality with a handy software and driver update tool.