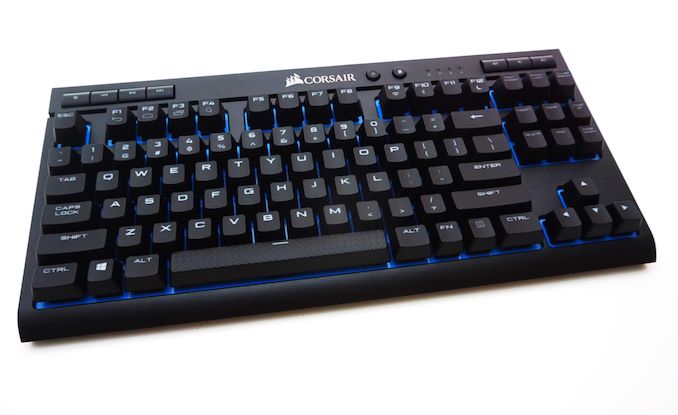 The plastics that form the frame of the Corsair K63 are of great quality, with excellent rigidity and scratch resistance. The company’s logo and short push buttons are hosted on a narrow band right above the mechanical keys. Beneath the plastic frame, a colored steel plate secures the mechanical switches and the main PCB. The keycaps are made from ABS plastic and have large, futuristic characters, while the Space Bar key is textured. The surface of the Space Bar should also decay less easily, as Space Bar keys with their right side heavily worn out are a common phenomenon. 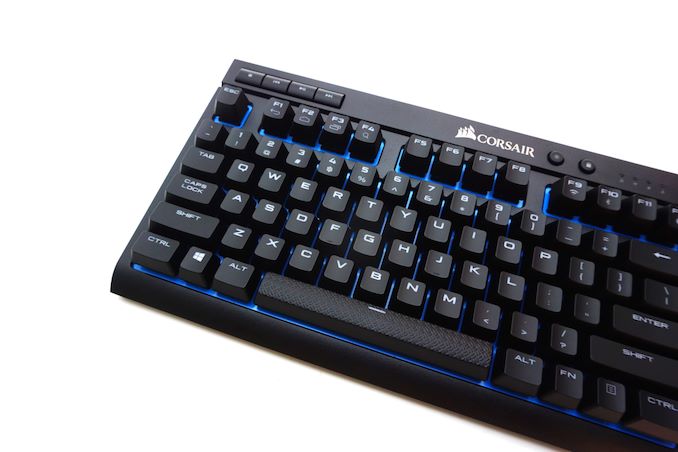 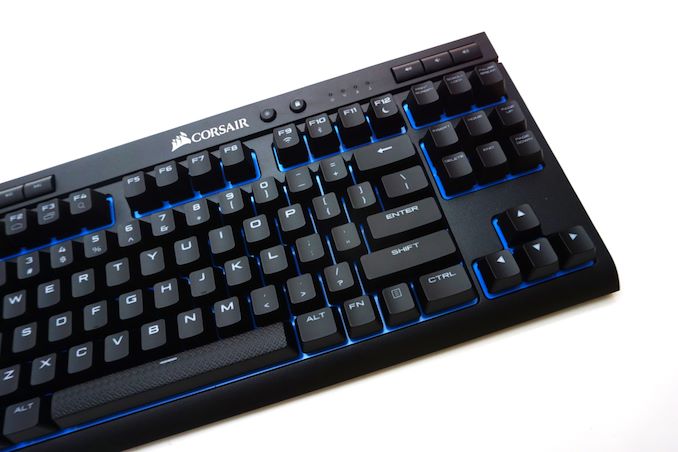 The Corsair K63 is a tenkeyless keyboard, the core layout of which does not fully adhere to the recommended ANSI layout.  Compared to the standard ANSI layout that has a 6.25× Spacebar and seven 1.25× bottom row keys, the bottom row of the keyboard has a 6.5× Spacebar, two 1.25× ALT, two 1.5× CTRL, and three 1× WIN/Fn bottom row keys. This is the “gaming” layout that reduces the size of the “unnecessary” WIN/Fn keys in favor of the more useful CTRL/Spacebar keys. Corsair has been using this layout on all of their advanced keyboards. 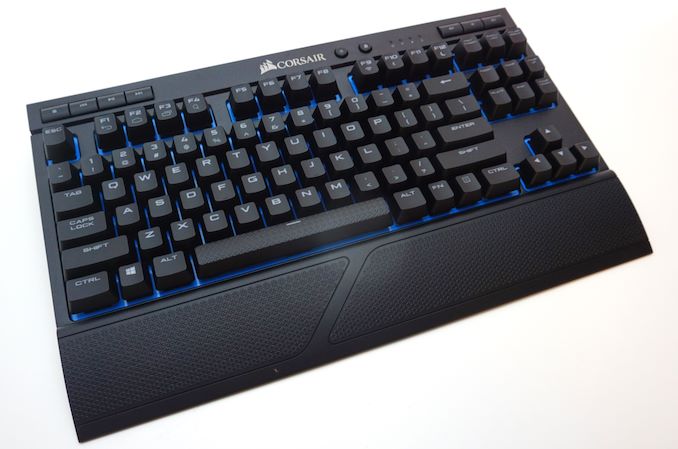 Basic OS functions (back, home, switch, search) have been inserted as secondary commands in the F1-F4 keys, and are accessible by holding down the Fn key. Similarly, the keyboard’s connectivity is controlled via Fn + F9-F10 keystrokes. Fn + F12 is the sleep command. There is no volume control wheel as those found on the rest of the K-series keyboards but Corsair did install three volume control buttons (mute, volume down, volume up). 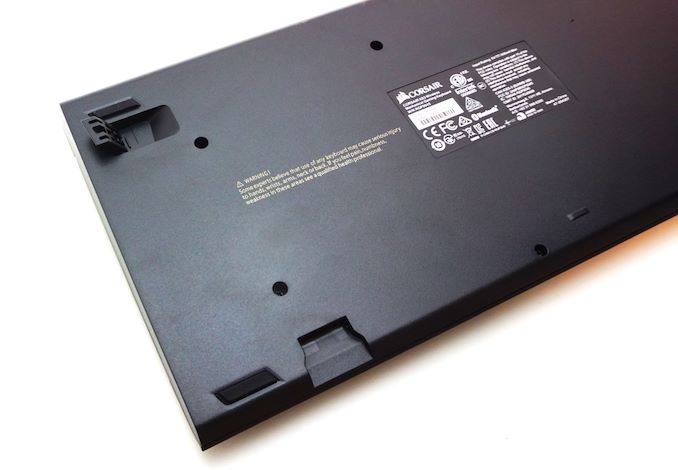 On the rear side of the keyboard we can spot a small micro USB port for data and charging, and a small on/off switch. The small port is vulnerable to damage and the cable should always be removed if the keyboard is to be packed and transported, but care should also be taken not to force the connector while the keyboard rests on a desk. 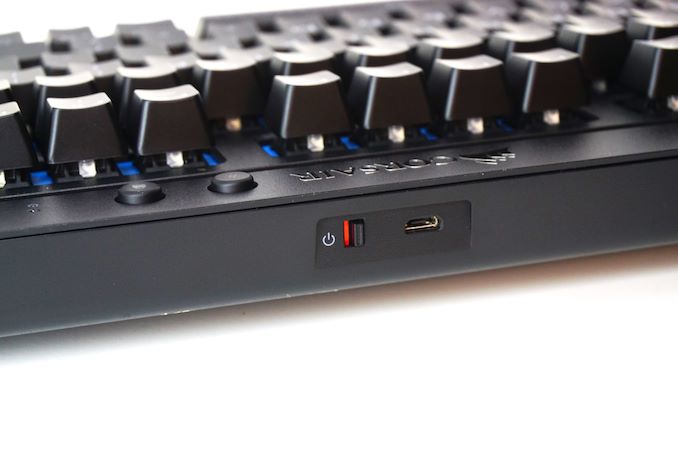 Beneath the keycaps we spot genuine Cherry MX switches with blue LEDs. Corsair only offers the K63 with Cherry's MX Red switches, which are essentially the "baseline" switches for the company, offering a solid balance when it comes to linearity and responsiveness. Cherry’s cross-type supports can be spotted beneath the larger keys. 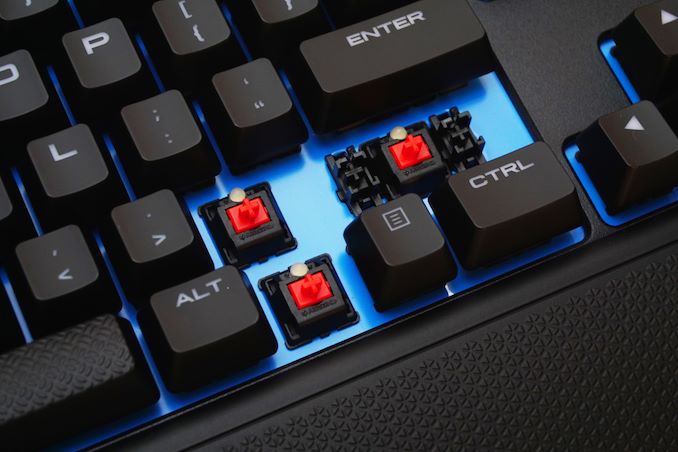 Despite its wireless design, Corsair used typical full power LEDs on the K63. As a result, the backlighting of the K63 is just as strong as that of most wired keyboards. Furthermore, as the backlighting is fixed, Corsair also dyed the steel plate with the exact same color as the LEDs. This creates a stunning visual effect, creating the illusion of perfectly uniform lighting surrounding each key. 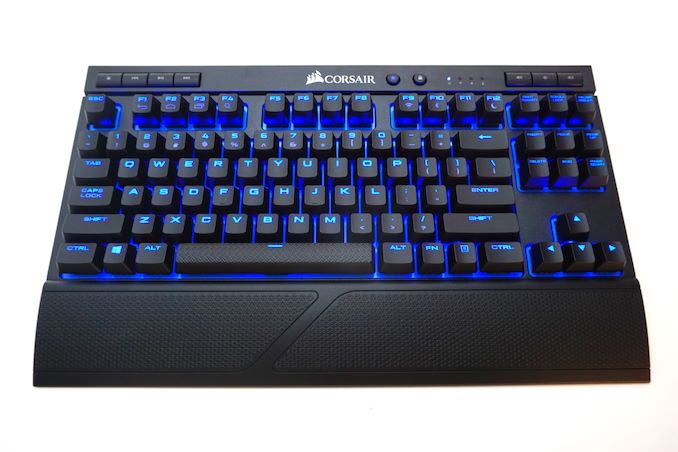 Removing the covers of the Corsair K63 reveals the secondary PCBs, the rubber dome buttons and the battery of the keyboard. Corsair installed a cylindrical 2950 mAh CR18650 battery, which we're very happy to see. As this is a very common battery type that can be easily found with many electronics retailers, this will make it easy to find replacement parts in the future once the battery eventually requires replacement. 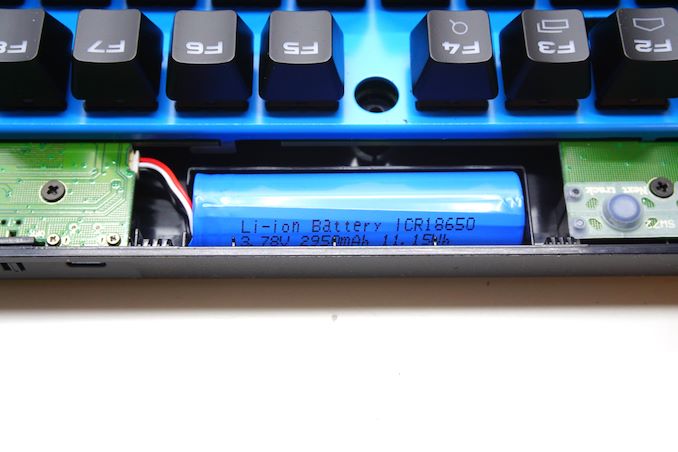 The heart of the keyboard is a NXP LPC11U68JBD100 microprocessor, an ARM Cortex-M0+ based chipset with a CPU frequency of 50 MHz, 256 kB Flash memory, 4 kB EEPROM and 36 kB SRAM. Corsair is using this particular chip on most of their advanced mechanical keyboards, not only because of its processing power but also because of its impressive internal flash memory. 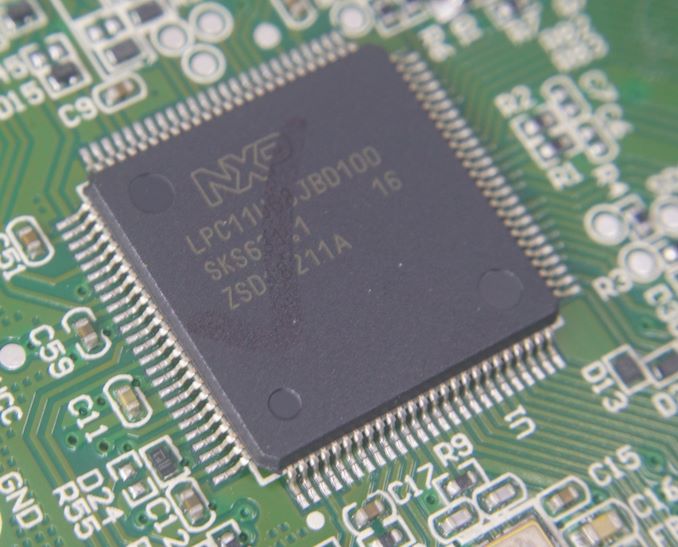 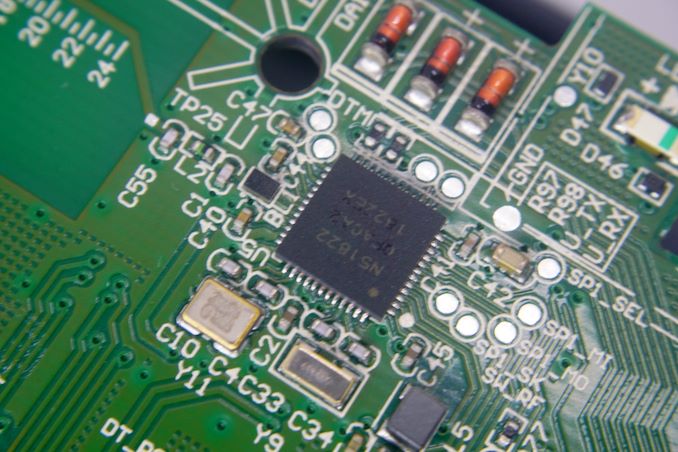