CrystalDiskInfo provides us with a quick overview of the internal SSD in the Solo Hawk Pro, and compares them with the other external SSDs that we are looking at in this section.

The Seagate Barracuda SSD is a Phison S10-based product. We had reviewed the 500GB internal version last year, and also looked at the 1TB and 2TB versions in a couple of external SSD reviews earlier this year.

Over the last couple of years, we have evaluated DAS units on Windows using our Thunderbolt 3 desktop PC (based on a GIGABYTE Z170X-UD5 TH ATX board) described here. However, starting late last year, we started noticing abnormally low performance numbers for certain devices and general instability after attempting Thunderbolt firmware upgrades (while trying to make an eGFX enclosure work with the system). Starting with the Plugable USBC-NVME storage bridge review, we have temporarily moved to using the Hades Canyon NUC as our testbed for direct-attached storage units.

We also evaluate the thermal performance of the external storage device by tracking its temperature as it is subject to the aforementioned real-world workload. Sustained writes, a notable weak point of many flash-based devices while also being a realistic use-case for DAS units, are also tested. Power consumption is tracked for the CrystalDiskMark workloads.

Prior to presenting the benchmark numbers, we list out the DAS units used for comparison purposes in this review:

The unique selling proposition of the Solo Hawk is its rugged nature, and CRU makes no claims about the read and write speeds other than pointing to the USB 3.1 Gen 2 interface's 10 Gbps theoretical limit. Given that the internal SSD is a SATA drive, we can expect upwards of 500 MBps practically. The ATTO benchmarks provided below show that we can hit around 550 MBps reads and around 500 MBps writes. Unfortunately, these access traces are not very common in real-life scenarios.

CrystalDiskMark, despite being a canned benchmark, provides a better estimate of the performance range with a selected set of numbers. As evident from the screenshot below, the performance can dip to as low as 18 MBps for random 4K reads. 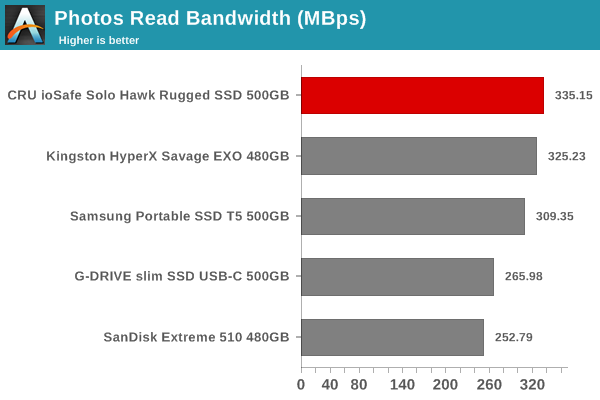 Usually, PC Mark 8 reports time to complete the trace, but the detailed log report has the read and write bandwidth figures which we present in our performance graphs. Note that the bandwidth number reported in the results don't involve idle time compression. Results might appear low, but that is part of the workload characteristic. Note that the same testbed is being used for all DAS units. Therefore, comparing the numbers for each trace should be possible across different DAS units. 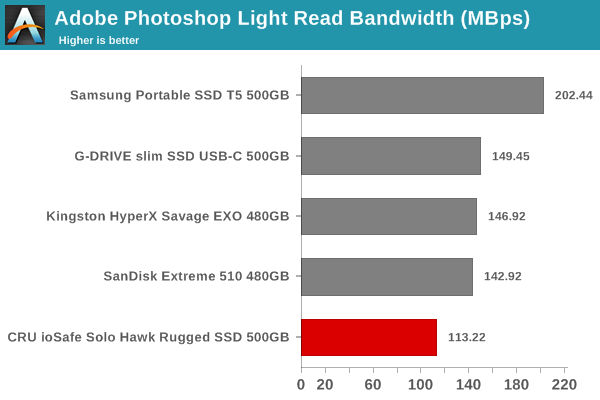 Yet another interesting aspect of these types of units is performance consistency. Aspects that may influence this include thermal throttling and firmware caps on access rates to avoid overheating or other similar scenarios. This aspect is an important one, as the last thing that users want to see when copying over, say, 100 GB of data to an external SSD, is the transfer rate going to USB 2.0 speeds. In order to identify whether the drive under test suffers from this problem, we instrumented our robocopy DAS benchmark suite to record the flash drive's read and write transfer rates while the robocopy process took place in the background. For supported drives, we also recorded the internal temperature of the drive during the process. The graphs below show the speeds observed during our real-world DAS suite processing. The first three sets of writes and reads correspond to the photos suite. A small gap (for the transfer of the videos suite from the primary drive to the RAM drive) is followed by three sets for the next data set. Another small RAM-drive transfer gap is followed by three sets for the Blu-ray folder.

An important point to note here is that each of the first three blue and green areas correspond to 15.6 GB of writes and reads respectively. Throttling, if any, is apparent within the processing of the photos suite itself. The Solo Hawk shows consistent performance across all three sets of workloads.

There is no performance throttling due to thermal concerns, as the drive reaches only 52C at the end of the test suite.

Overall, the performance of the Solo Hawk is a mixed bag - in general, it acts as a typical SATA SSD behind a USB 3.1 Gen 2 bridge, and comes out on top in certain workloads, while not faring that well in others. The SSDs used for comparison in this section are not as rugged or tolerant to environmental variations as the Solo Hawk. We shall compare the Solo Hawk against other competing products from a pricing and specifications perspectie in the next section.

+ Submit News
AT Deals: Razer Huntsman V2 TKL Keyboard Down to $90 at Amazon