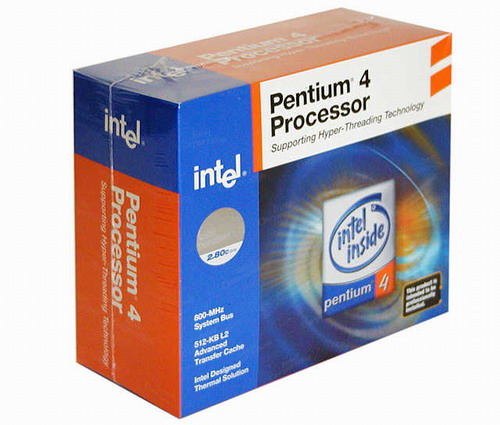 As usual, we have some testing to share as well. First off, we decided to try out our luck with the 2.8C's default Vcore of 1.525V. At this voltage, we were able to achieve a stable overclock of 3.39GHz. Clearly though, more than 1.525V was needed, so we cranked up the voltage to what is probably the highest Vcore with which you want to experiment using a Pentium 4 processor, 1.65V (1.70V might be OK). At 1.65V, our 2.8C reached 3.59GHz, or an additional 200MHz bump in clock speed as a result of raising Vcore 0.125V from its stock 1.525V setting. At nearly 3.6GHz, we were able to sustain stable operation for 8 hours using Prime95 and SPECviewperf 7.1.1 programs. Unfortunately, it's very difficult to replicate exactly how stable your system is going to be over months of usage when we were only able to verify stability at 3.59GHz for a few hours. But what our results do tell you is that a stable 3.3GHz to 3.4GHz is definitely easily possible under 1.65V. Of course, we're assuming you get a chip at least as good as ours, and there's no guarantee of that. We bought our 2.8C, just like we did our 2500+, from a local vendor, so our processors were not handpicked from Intel or AMD themselves. Therefore, our results are representative of a CPU that is widely available to the public through online venders. As we've reiterated countless times, overclocking is never guaranteed, so don't be disappointed if you can only get, for example, 3.0GHz from your 2.8C. Remember, Intel and AMD processors do not have the same scalability limit, as each processor is binned according to the demand of that grade processor. 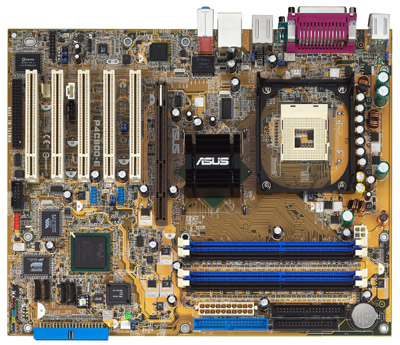 When all is said and done, the P4C800-E Deluxe has proven itself to be the premier Pentium 4 motherboard for overclockers. We have been routinely able to reach into the 270MHz-280MHz FSB range on good, old retail Intel cooling with a good 2.4C processor. However, with a 2.8C processor, the FSB that you're able to reach isn't really too important, while the core clock speed is. However, if you're using a 2.4C processor, the P4C800-E's ability to sustain a 1:1 FSB:memory ratio is significant. Running your memory and FSB in sync at that high a speed will yield tremendous performance. But in the end, the performance hit you take by using high speed memory to match your high speed (overclocked) FSB may not be worth the extra money due to inflated memory timings (read: latencies).

However you cut it, though, the ASUS P4C800-E Deluxe offers everything the overclocker could want; plenty of room for FSB overclocking, 2.85V max VDIMM, 1.95V max Vcore, and features like CSA Gigabit LAN, SATA and IDE RAID, IEEE 1394 FireWire, etc. This motherboard is absolutely packed with just about every feature a high end user and overclocker could need. The P4C800-E Deluxe is also capable of handling 2.8E processors, based on the 0.09-micron Prescott core. However, as we've mentioned in previous Buyer's Guides, we highly advise against purchasing any "E" revision Pentium 4 processors for now, even though they are 100% compatible with the ASUS P4C800-E Deluxe. The slightly higher prices on "E" Pentium 4 processors, the more or less slower performance, and their high power consumption are all drawbacks of using a Prescott processor for overclocking.

Listed below is part of our RealTime pricing engine, which lists the lowest prices available on the Intel CPUs and motherboards from many different reputable vendors: