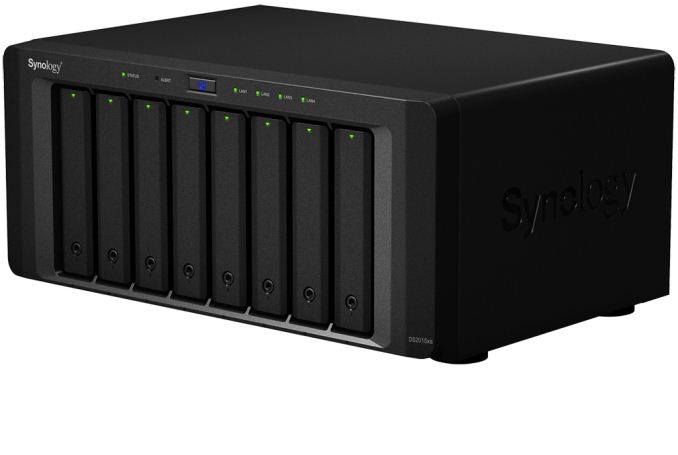 Synology is one of the most popular COTS (commercial off-the-shelf) NAS vendors in the SMB / SOHO market segment. The NAS models introduced by them in 2014 were mostly based on Intel Rangeley (the Atom-based SoCs targeting the storage and communication market). However, in December, they sprang a surprise by launching the DS2015xs, an ARM-based model with dual 10GbE ports. We covered the launch of the Synology DS2015xs in December, and provided some details about the Annapurna Labs AL514 SoC in it.

ARM-based SoCs for SMB / SOHO NAS units typically support up to 4 bays and come with dual GbE links. Intel's offerings have had a virtual monopoly in the other tiers of the market. Synology's DS2015xs, with its native 10G capabilities, brings in another contender into the market.

The Synology DS2015xs runs the latest DiskStation Manager OS, which, subjectively speaking, is one of the best COTS NAS operating systems in the market. Geared towards both novice and power users, it also provides SSH access. Some additional aspects can be gleaned through SSH. For example, the unit runs on Linux kernel version 3.2.40. The AL514 SoC has hardware acceleration for cryptography and two in-built USB 3.0 ports. There are also four network links (we know from external inspection that two are 10GbE, while the others are 1GbE) with unified drivers for both types of interfaces. 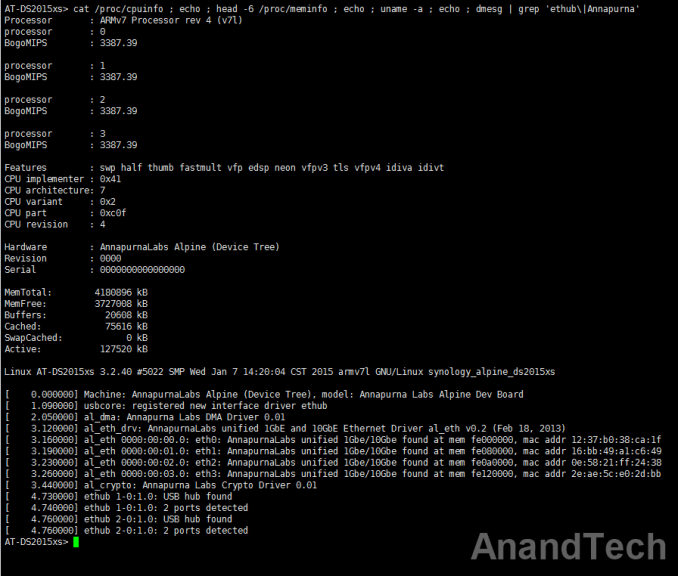 In the rest of the review, we will first take a look at the performance of the unit as a direct-attached storage device. This is followed by benchmark numbers for both single and multi-client scenarios across a number of different client platforms as well as access protocols. We have a separate section devoted to the performance of the NAS with encrypted shared folders. Prior to all that, we will take a look at our testbed setup and testing methodology.

The Synology DS2015xs can take up to 8 drives. Users can opt for different RAID types depnding on their requirements. We expect typical usage to be with multiple volumes in a RAID-5 or RAID-6 disk group. However, to keep things consistent across different NAS units, we benchmarked a SHR volume with single disk redundancy (RAID-5). Tower / desktop form factor NAS units are usually tested with Western Digital RE drives (WD4000FYYZ). However, the presence of 10-GbE on the DS2015xs meant that SSDs had to be used to bring out the maximum possible performance. Therefore, evaluation of the unit was done by setting up a RAID-5 volume with eight OCZ Vector 4 120 GB SSDs. Our testbed configuration is outlined below.

The above testbed runs 25 Windows 7 VMs simultaneously, each with a dedicated 1 Gbps network interface. This simulates a real-life workload of up to 25 clients for the NAS being evaluated. All the VMs connect to the network switch to which the NAS is also connected (with link aggregation, as applicable). The VMs generate the NAS traffic for performance evaluation.

We thank the following companies for helping us out with our NAS testbed:

In addition to our standard NAS evaluation suite, the Synology DS2015xs also warrants investigation under ideal network conditions as a direct-attached storage unit. The presence of 10G network links in the unit has prompted Synology

The Emulex PCIe NIC doesn't support teaming under Windows 8.1. Therefore, we had to install Windows Server 2012 R2 on the additional SSD to make our DAS testbed dual-boot for evaluating NAS units. The DHCP Server feature was also activated on the teamed port to which the NAS's 10G ports were connected. On the NAS side, the ports were set up for teaming too and configured to receive an IP address from a DHCP server. The MTU for the interface was configured to be 9000 bytes. The details of the tests that were run in this mode will be presented along with the performance numbers in the next section.