As mentioned earlier, Cougar Point chipset-based motherboards are fully diversified into every cost niche of the motherboard market. While cutting-edge, flagship motherboards garner the most attention from enthusiasts, inexpensive, no-frills boards are generally just assumed to all be more or less equivalent in performance. But does performance vary between these budget boards? We briefly benchmark a few important motherboard features: LAN, SATA, and USB 2.0 throughput. But before we get to the benchmarks, let's compare features.

I tested eight different budget motherboards—four socket AM3 with AMD chipsets, one FM1 with the A55 chipset, and three based on Intel chipsets (all LGA 1155). Here's a quick rundown of the various features for each board.

One thing to note is that of the above motherboards, Biostar and MSI offer 3-year warranties while ASRock offers a 1-year warranty. As you can see, in general, you'll get more for your money from an AMD-based motherboard than an Intel-based motherboard. That is, none of the Intel boards offer Gigabit ethernet, and only one offers DVI in addition to VGA connectivity; the FM1 board is also the only board with an HDMI port. Do the Intel platforms instead offer better performance? Let's find out.

While we did not perform thorough testing like when we review a specific motherboard, we tested three important metrics for all eight boards: USB 2.0 performance, SATA throughput, and LAN performance.

We used a Mushkin Ventura Pro USB 3.0 flash drive and CrystalDiskMark 3 to test the sequential write and read speeds of a 1000MB file. While the Intel boards tend to perform better than the AMD boards, the differences here are very minor and would likely not be noticeable in real world scenarios. The single USB 3.0 equipped board would of course be able to run quite a bit faster with an appropriate USB 3.0 flash drive. 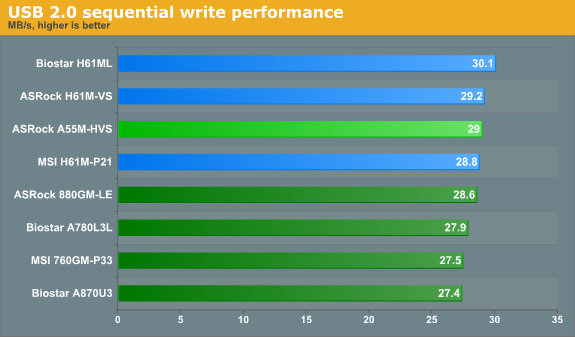 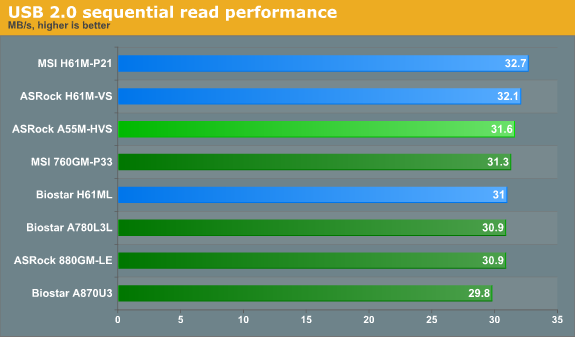 To test SATA performance, we again used CrystalDiskMark 3 to measure the sequential write and read speeds of a 1000MB file—with a Patriot Pyro 120GB SSD. This SSD is one of today's top performers and costs nearly $200—well above the budget sector. However, prices on SSDs will only fall as time passes, and this SSD illustrates what these boards are capable of better than a mechanical HDD. From these results, it's clear that all of the boards perform very similarly in terms of SATA throughput. 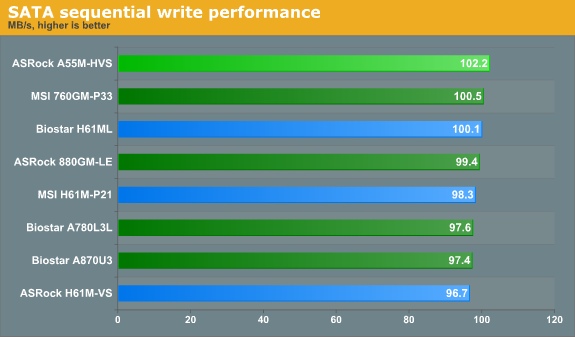 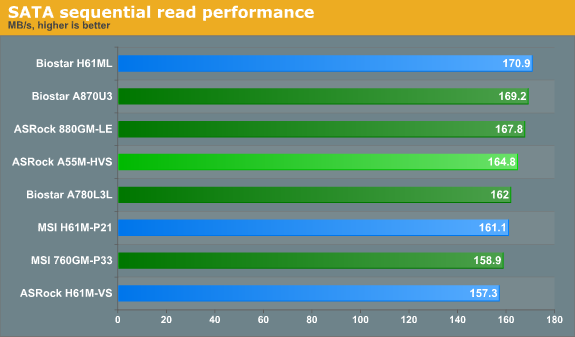 LAN Speed Test is a freeware program designed for testing the network connection between two PCs on a home network. The speed of the transfer is limited by the lowest common denominator on the network, so if you have gigabit ethernet capable computers but a 100 Mbit capable router, you are limited to 100 Mbit transfer. For this test, we use LAN Speed Test to transfer a 1000 MB file across a home network with a 100 Mbps lowest common speed to the same machine each time, in a write/read scenario. It is critically important to note that if you plan on attaching any of the Intel Cougar Point chipset-based boards in this guide to a network, you will be limited to 100 Mbps transfers as none of them have Gigabit adapters. 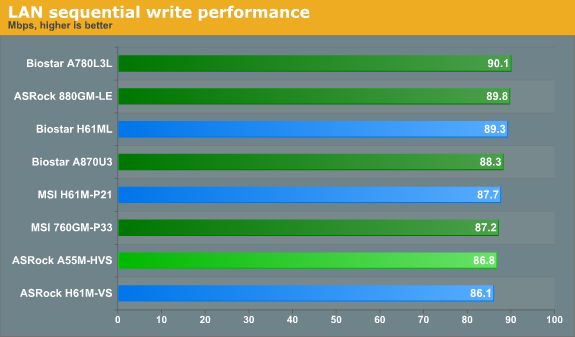 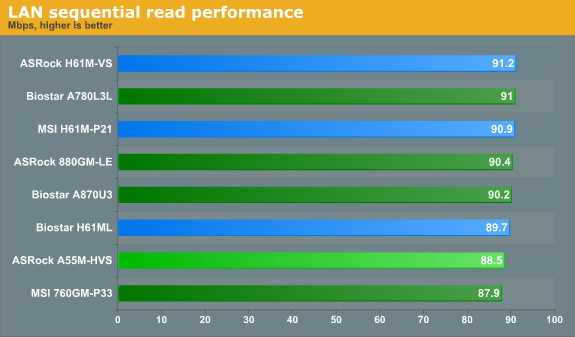 From these benchmarks, it appears that the budget boards are mostly equivalent performers. I was heartened to experience neither anomalous behaviors nor frustrating issues with any of the boards in the course of testing. Though it's somewhat disappointing to not find a hidden gem, it is useful to know that many budget boards are solid performers—so savvy consumers can watch for sales and rebates.

We cover the rest of the system components on the next page.