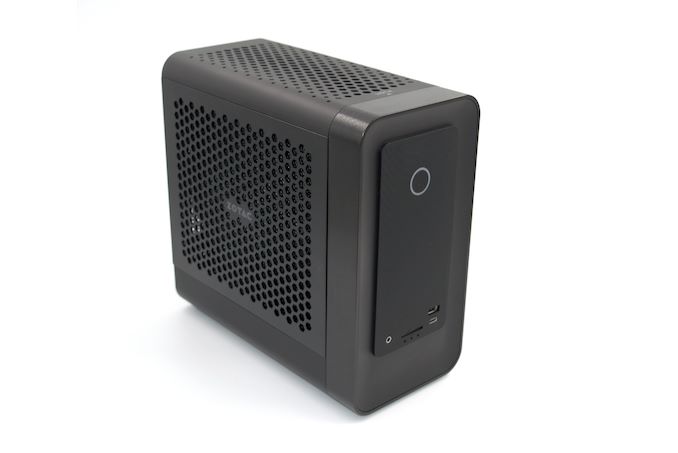 Zotac has been a pioneer in bringing compact small form-factor (SFF) machines to the market right since the ION days. The introduction of the ZBOX EI750 in 2014 marked the beginning of Zotac's foray into the SFF gaming PC segment. With the burgeoning market for compact systems (kickstarted by the success of the Intel NUC initiative), Zotac has also grown from strength to strength. The company now has around 8 different mini-PC families targeting different segments. The ZBOX E series (E initially stood for 'EPIC GAMING', before becoming the more arcane 'Enthusiast' in recent years) caters to the gaming crowd and is marketed under the MAGNUS tag. The first mini-PC in this series, the ZBOX EI750, used the eDRAM-augmented CrystalWell parts in 2014. The MAGNUS EN970 introduced in 2015 was Zotac's first attempt at integrating a discrete GPU board into the mini-PC form-factor.

Gaming mini-PCs have always had to deal with tradeoffs in terms of processor TDP, GPU TDP, and PSU integration. Almost all of the early gaming mini-PCs involved re-imagining a gaming notebook motherboard in a desktop form-factor - MXM GPUs and sub-45W TDP processors were the norm. Intel's gaming-focused Enthusiast and Extreme NUCs have been upping the ante in this department, and Zotac has also been up to the challenge. The company's current flagship is the ZBOX MAGNUS ONE (introduced at the 2021 CES). Coupling a desktop Comet Lake CPU with a desktop nVIDIA Ampere GPU, it promises plenty of gaming prowess. This review takes a look at the performance and value proposition of the top-end ZBOX MAGNUS ONE model - the ZBOX-ECM73070C-W2B.

Zotac's E-series mini-PCs have enjoyed great success in the gaming mini-PC market, prompting the company to regularly update the lineup with the latest and greatest CPUs and GPUs. Tracing the history of Zotac's flagship E-series systems, we find different tradeoffs applied between the CPU TDP, GPU TDP, and PSU. Higher TDP components have typically carried a premium price tag to accommodate a liquid cooling solution, prompting the company to experiment with air-cooled systems to broaden the market appeal with lower pricing. The details of the gaming flagships in each generation are listed below:

Between the MAGNUS EK71080 and the MAGNUS ONE, Zotac started focusing more on the content creators market with their high-end E-series units. The flagship Inspire Studio sported a 65W TDP Coffee Lake-S CPU and a 175W TDP RTX 2060 SUPER, with a form-factor similar to that of the MAGNUS EK71080. The EN72080V and EN072080S were based on the thinner EN970 form-factor. The 2021 MAGNUS ONE thus marks Zotac's strong return to the SFF gaming market with a proper desktop CPU and GPU. 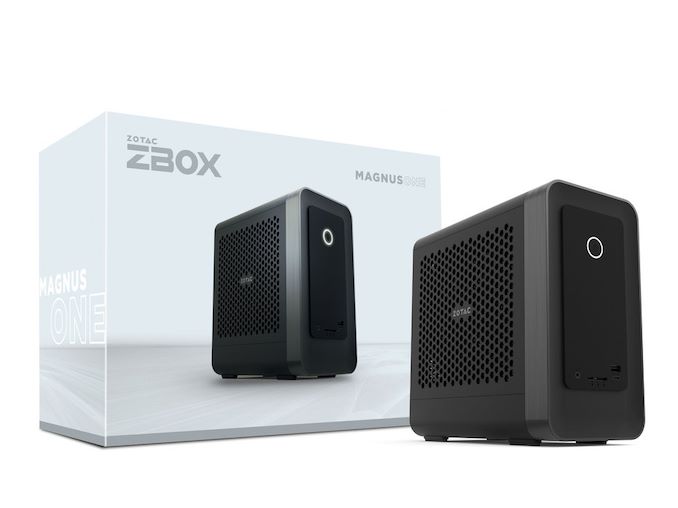 Thanks to the integrated PSU, the package contents are largely simplified compared to the other E-series mini-PCs. There is a US AC power cord, two WLAN antennae, a read-only USB key for Windows Image Recovery, and a quick start guide. 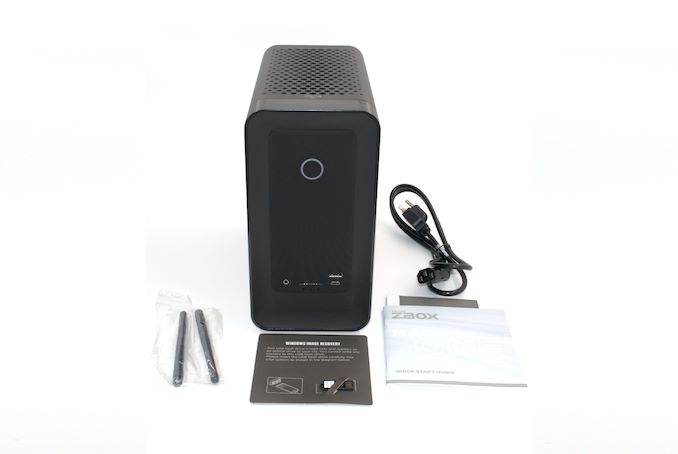 The specifications of our review configuration are summarized in the table below:

In terms of external appearance, the impact of the Ghost Canyon NUC can be clearly seen. The top panel of the chassis includes a couple of fans. It slides off easily after the two rubber screws are removed. This is a tool-less operation, unlike what we saw in the Ghost Canyon and Beast Canyon NUCs. 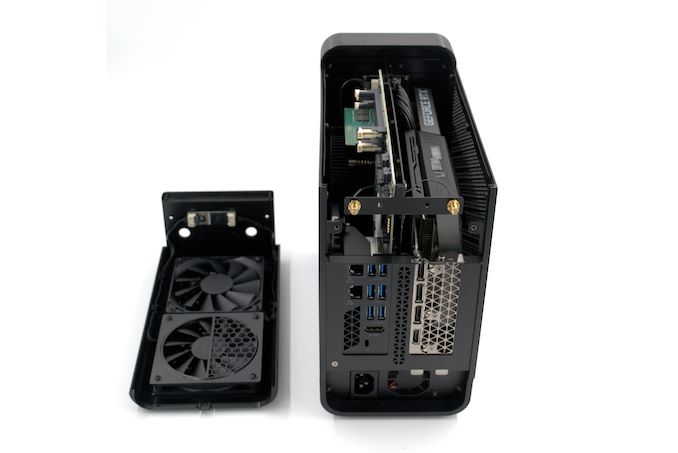 The two side panels can be removed once the top panel is out of the picture. This exposes the GPU and the motherboard on either side. 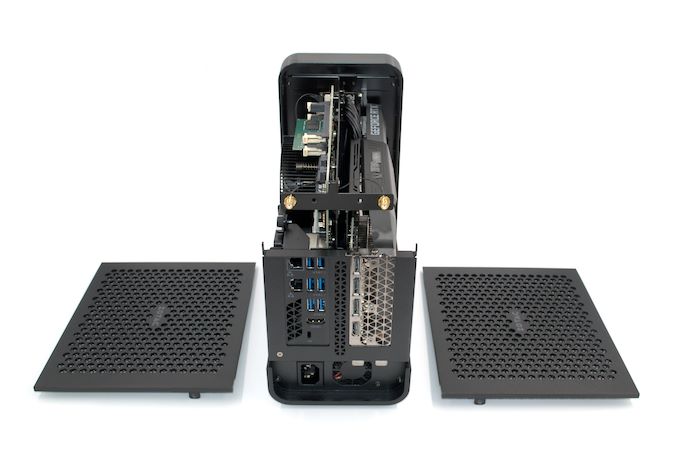 Unlike the NUCs, the M.2 SSD slots, 2.5" drive caddy, and the vertical SODIMM slots are immediately accessible after the side panel's removal. 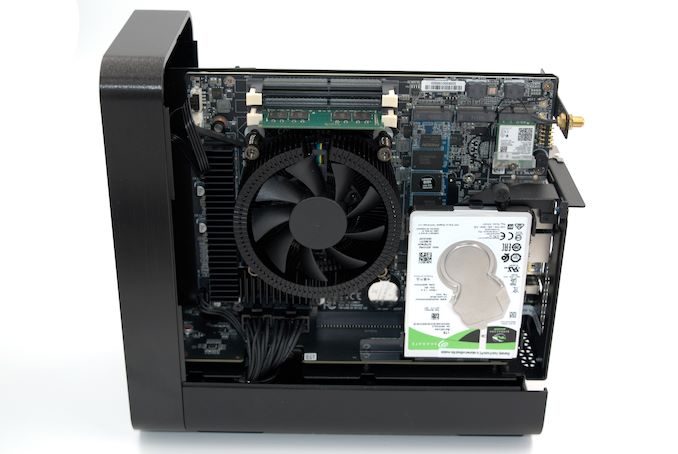 Since our review sample was essentially a pre-built system, we didn't have to install any new components inside the chassis. Zotac opts to populate only one DRAM channel in the system. This does hamstring the performance of the system, but we opted to review the system as-is in terms of hardware. We did re-image the M.2 SSD with Windows 10 Enterprise x64, as it provides more fine-grained control over benchmarking routines without unexpected interference from the OS.