In our first Intel Z490 motherboard review, the ASRock Z490 Taichi takes center stage. With its recognizable Taichi clockwork inspired design, a 12+2 power delivery, three PCIe 3.0 x4 M.2 slots, and a Realtek 2.5 gigabit Ethernet port on the rear panel, it looks to leave its stamp on the Z490 market. The Taichi remains one of ASRock's perennial premium mid-range models.

Back in 2017, ASRock first introduced its uniquely styled and impressive cost-to-performance Taichi series on Intel's X99 HEDT chipset. Fast forward to the present day and the Taichi series has come on leaps and bounds in both design, specifications, and features.

Enter the latest version, the ASRock Z490 Taichi, which is an ATX sized model catering to the upper echelon of the mid-range segment with some very notable inclusions. Intel is also introducing its LGA1200 socket, which supports Intel's 10th generation processors. There isn't much difference between the new Z490 and the previous Z390 chipsets in terms of specifications, which leaves the onus on motherboard vendors to make its mark through designs, controllers, and refinements. 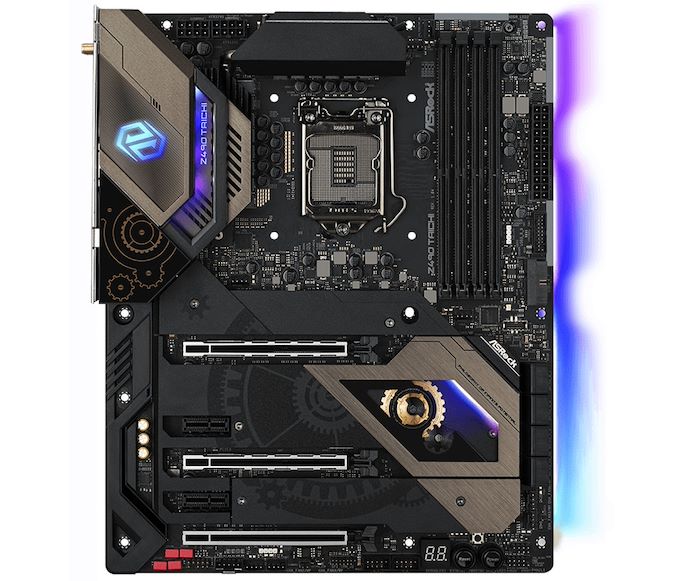 Over the last few years, ASRock has been updating the Taichi aesthetic with various design traits, including clockwork style heatsinks and patternings, with swathes of RGB integrated into the heatsinks. The ASRock Z490 Taichi is one of its most premium revisions yet, with a black and copper theme complemented by its fashionable clockwork styled chipset heatsink. The rear panel cover is a made from plastic, but visually it looks metal due to its brushed copper printing, with two RGB enabled zones specific to this area; the Taichi logo and around the model number.

Moving down the board is three full-length PCIe 3.0 slots which run at x16, x8/x8, and x8/x8/+4 and are surrounded by plastic PCIe armor and aluminium M.2 heatsinks. The chipset heatsink also includes some RGB LEDs which is designed to make the cogwheel inside 'pop' in a chassis, with some RGB LEDs also located on the underside of the board at the right-hand side. There are three PCIe 3.0 x4 M.2 slots with the bottom two including support for SATA drives, while the board also uses eight SATA ports, six from the chipset and two from an ASMedia SATA controller.

Overall vendors have upped its support for faster memory through its QVL listings on its Z490 models. This could be from better componentry and memory routing refinements as much as it is from a stronger memory controller on Intel's Comet Lake desktop processors. The ASRock Z490 Taichi has official support for up to DDR4-4666, with a total capacity of up to 128 GB is supported across its four slots. 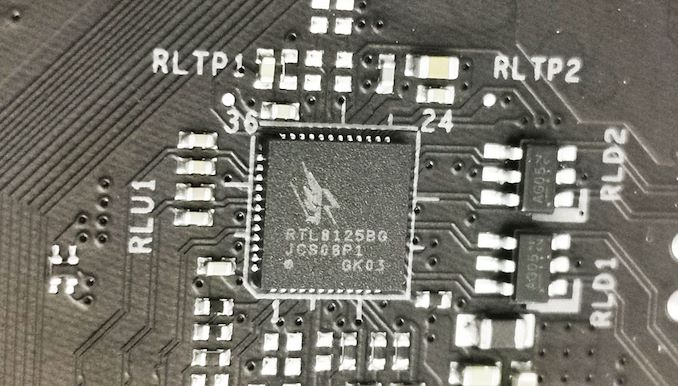 Realtek RTL8125BG 2.5 G Ethernet Controller on the rear of the ASRock Z490 Taichi

One of the most improved elements from Z490 models to Z390 models in terms of product evolution from vendors is on the networking front. The ASRock Z490 Taichi offers both a Realtek RTL8125BG 2.5 G and Intel I219-V Gigabit Ethernet controller pairing. Also present is an Intel AX201 Wi-Fi 6 module, with plenty of rear panel USB 3.2 G2 connectivity on the rear panel. The ASRock Z490 Taichi has a partially covered backplate, which includes cooling for the rear of the power delivery and the Realtek RTL8125BG which is located on the rear of the PCB.

Also improved for Z490 is the power delivery. The Z490 Taichi features a 12+2 power delivery driven by an Intersil ISL69269 PWM controller, with SiC654 50 A power stages which runs in 6+1 with the use of doublers. Interestingly ASRock has including an active power delivery cooling solution with dual fans which spin up only when it is running hot. 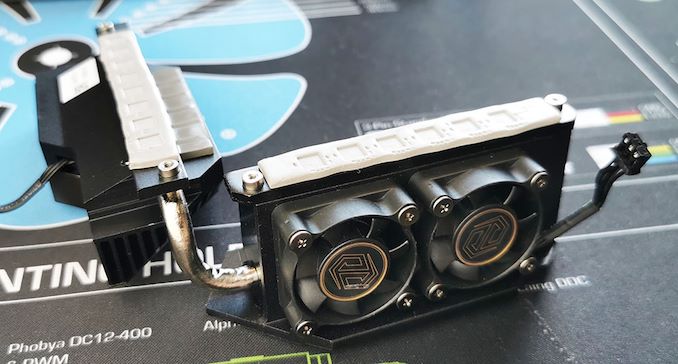 Only powers on when thermals are super high

Accompanying the power delivery is two 8-pin 12 V ATX CPU power inputs, while along the bottom of the board is a two-digit LED debugger, a power button, and a reset button.

In regards to performance, the ASRock Z490 Taichi is competitive with other Z490 models on test. It trades blows and nets some wins and losses, but all marginally, with the exception of our system tests. So far the ASRock Z490 Taichi is the most power-efficient Z490 model we've tested so far, with good performance in DPC latency. The only caveat comes in our POST time test.

Overclocking with the ASRock Z490 Taichi with our testbed Intel Core i7-10700K proved promising. We scored  consistent gains to performance when testing with our POV-Ray benchmark. The levels of VDroop when manually overclocking can be attributed to aggressive levels of loadline calibration, which when manually setting a CPU VCore, would automatically change LLC to level 1. Testing the four overclocking presets proved a little lacklustre, with not much difference in performance to default settings, which shows the Taichi to have a pretty aggressive boost profile. This was especially noticeable as default settings managed to hit temperatures hit 86°C on our premium 280mm AIO. Manually overclocking proved the best method, which is normal, with more control over all-core core frequency speeds and CPU VCore voltages.

Coming with an MSRP of $370, the ASRock Z490 Taichi has some fierce competition in the $350-400 price bracket. This includes the ASUS ROG Maximus XII Hero Wi-Fi ($399), the GIGABYTE Z490 Aorus Master ($389), and the MSI MEG Z490 Ace ($400). All of these models with the exception of the Maximus XII Hero Wi-Fi sit directly below the brand's flagship models at present and feature Wi-Fi 6 wireless interfaces and at least a 2.5 G Ethernet controller. One thing the Z490 Taichi has over the competition is a unique design and from a looks perspective, uniqueness is a good selling point when trying to select between models with similar specifications and pricing, something the Taichi has done well with over the last few years.