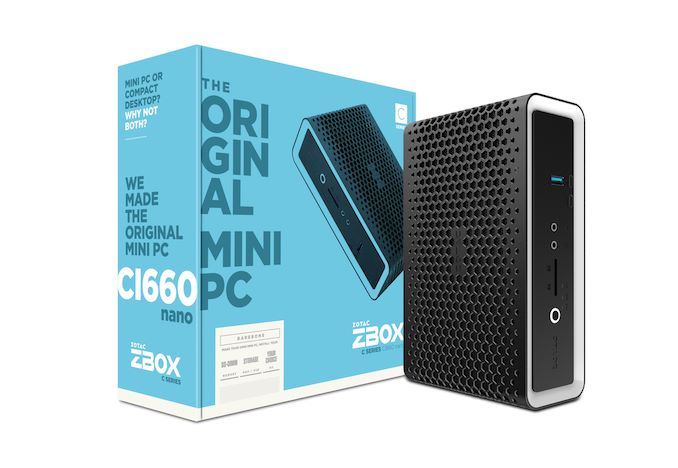 Zotac is a major player in the SFF PC space, and the emergence of the ultra-compact form-factor (UCFF) NUCs has broadened the available market for ther mini-PCs. The company markets their passively-cooled machines under the C-series moniker. Their C-series nano units adopt a form-factor very similar to Intel's NUCs, providing performance and thermal efficiency commensurate with their size.

The company's latest models, the CI6xx nano units, are based on the Kaby Lake-Refresh U-series processors, and they aim to improve on the older C-series units by adopting a larger form factor and adding more platform features. The larger form factor should, in theory, be able to accommodate a better-performing cooling system. The added platform features should be able to broaden the addressed markets. But how well does Zotac fare with respect to these goals? This review aims to provide some answers.

The Zotac ZBOX CI660 nano belongs to the company's passively-cooled C-series family. It is based on the Kaby Lake-R U-series SiPs (KBL-R U). We had reviewed the Zotac CI523 nano back in 2016. At that time, we had appreciated what Zotac had done by introducing an affordable fanless high-performance computing system for the average consumer. The CI523 nano, which was based on a 15W TDP Core i3-6100U, was slightly larger than the CI540 nano (based on a 11.5W Haswell-Y SiP).

Zotac's new CI660 nano, by contrast, eschews the square-base form factor of the previous C-series PCs for a rectangular board. The larger board area also allows Zotac to integrate dual gigabit Ethernet ports (compared to the single port in the CI523 nano). The larger heat-sink allows for the integration of the Core i7-8550U, a processor with a 15W TDP that can also be configured for operation at 7.5W or 25W.

The CI660 nano is available barebones, or, in a PLUS model with RAM and SSD (no OS). The latter is priced at $700. Zotac supplied us with a barebones model for review, and we utilized a Crucial BX300 480GB 2.5" SATA SSD and two Patriot Memory DDR4-2800 SODIMMs to complete the build.

The specifications of our Zotac ZBOX CI660 nano review configuration are summarized in the table below.

The Zotac ZBOX CI660 nano kit comes with a quick-start guide, user's manual, hardware for VESA mounting, bunch of screws for installing the storage drive, and a 65 W (19V @ 3.42A) adapter with a US power cord. A read-only USB drive with the requisite drivers is also bundled. 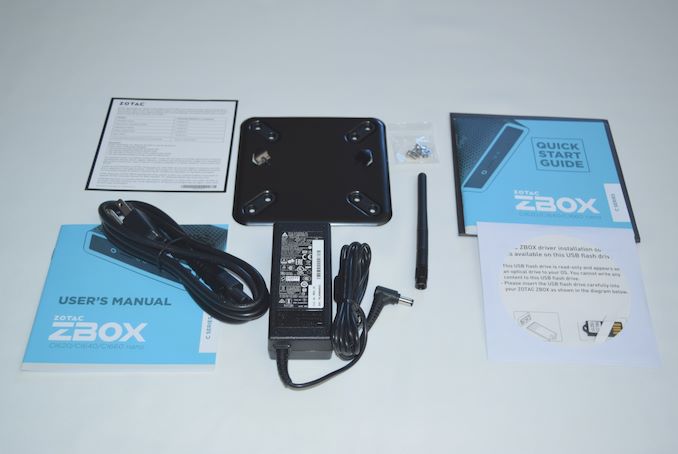 The gallery below takes us around the chassis design. Note that the unit is liberally perforated, allowing for easier convective heat dissipation.

Access to the SATA drive bay and the SODIMM slots is tool-less, as is typical of Zotac's mini-PCs. Unscrewing the base also reveals the ASMedia ASM2142 daughterboard that enables the two USB 3.1 Gen 2 Type-C ports. The base itself has thermal pads mounted for the RAM sticks as well as the SSD. 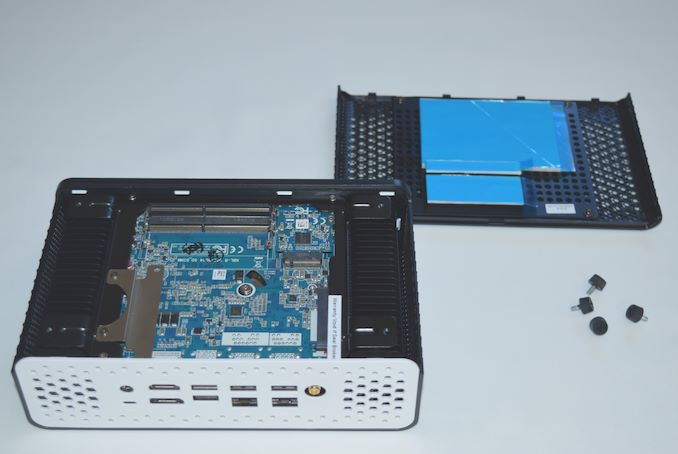 The heat sink fins revealed by the removal of the base fully envelopes the top segment of the board. The gallery below takes us around the unit as it is subject to additional teardown.

The Core i7-8550U package integrates an Intel Cannon Point-LP platform controller hub (PCH). While Zotac doesn't document the board layout in detail, the distribution of the PCIe lanes from the SiP is brought out in the system report summary generated by AIDA64:

Unlike the Bean Canyon NUC's CNVi Wi-Fi built into the PCH, the CI660 nano has to use one of the PCIe lanes to support the Intel Wireless-AC 3165 WLAN adapter. The USB 3.1 Gen 2 ports also have to be enabled by a discrete ASMedia ASM2142 bridge. We have two gigabit Ethernet ports, and both are enabled by Realtek controllers.

The HDMI display output from the CI660 nano is not directly from the SiP's HDMI display output. Rather, Zotac uses a Parade Technologies PS175 LSPCon on board to convert the Display Port 1.2 output of the processor to a HDMI 2.0 port with HDCP 2.2. Theoretically, this also supports HDR. However, stereoscopic 3D is not supported.

In the table below, we have an overview of the various systems that we are comparing the Zotac ZBOX CI660 nano against. Note that they may not belong to the same market segment. The relevant configuration details of the machines are provided so that readers have an understanding of why some benchmark numbers are skewed for or against the CI660 nano when we come to those sections.