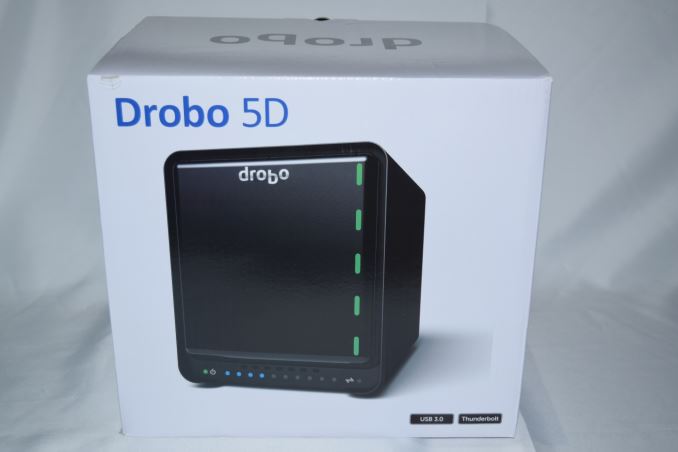 Drobo's direct-attached and network-attached storage units are quite popular in the market, but we never got the opportunity to evaluate them on AnandTech. At CES 2016, we met with Drobo and got pitched with the advantages of Drobo's BeyondRAID technology. In this review, we take a look at how BeyondRAID is used in one of their most popular DAS units - the Drobo 5D.

Drobo makes a variety of external storage devices for both consumers and businesses. These fall under both direct-attached and network-attached categories. Their first product appeared in the market in 2007, and since then products have been released regularly. I will not go into the details of Drobo's history, as Wikipedia has more than enough interesting information about how Drobo has evolved over the years.

One of the major selling points of Drobo's products (compared to the competition) is the usage of a proprietary patented method to provide resiliency against disk failures. We will briefly discuss this feature (called BeyondRAID) further down in this section. Prior to that, let us take a look at the specifications of the Drobo 5D. 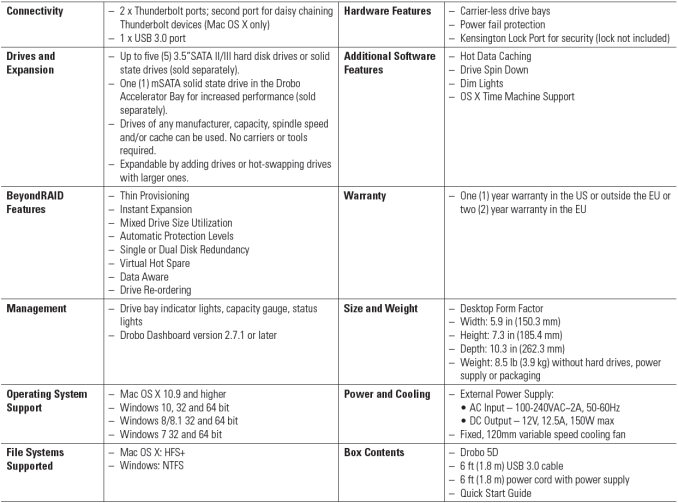 Drobo's products have a long life cycle. In fact, the Drobo 5D DAS was introduced back in late 2012, and it is still available in the market and receiving firmware updates.

Compared to the average multi-bay direct-attached storage solution, the Drobo 5D has two interesting features - the first one is the presence of two Thunderbolt ports on the unit in addition to the USB 3.0 device port. The second is the presence of a mSATA SSD slot on the underside of the unit. It can be used for data-aware tiering, i.e, caching of 'hot' data. 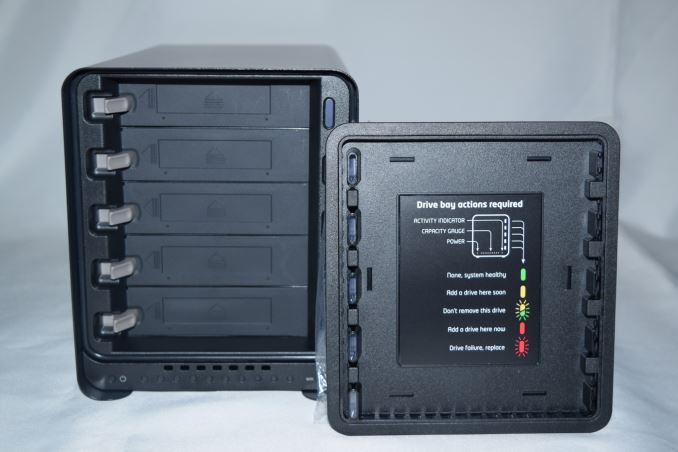 The Drobo 5D employs premium packaging. In addition to the 150W (12V @ 12.5A) power adapter, USB 3.0 cable and the quick start guide, the main unit comes in a tote bag. The all-metal chassis has rounded edges can be aesthetically pleasing, away from other sharp-edged designs: the five 3.5-inch drive bays are covered by a magnetic lid and installing disks is a tool-less operation. After moving the latch to the side, the drives slot right in, and the latch automatically snaps back in to keep the drive in place / prevent accidental removal. A spring mechanism at the inner end ensures that taking out the drives is a simple matter of just moving the latch to the side.

The mSATA slot is accessible from the underside of the chassis and is also controlled by a latching mechanism. A sticker strongly advises users to install the mSATA module only after completely powering down the system. The mSATA SSD is held in place by a couple of notches that slot into the holes usually reserved for screws. In fact, the Drobo 5D chassis is extremely user-friendly - there is absolutely no need for a screwdriver, and, in fact, there are even no tool-less screws to deal with.

Moving on to the chassis itself, we have indicator LEDs to the right and bottom of the front lid. The rear side of the lid provides a guide to the statuses indicated by the various colors. As is usual, the ports and switches are all on the rear side of the unit. A 120mm fan is housed behind the perforated rear panel to provide ventilation. There are two Thunderbolt ports to support the usage of the unit as part of a daisy-chain configuration. Unfortunately, it works only with compatible Apple products. A USB 3.0 Type-B female port, a power inlet and an explicit power on/off switch make up the rest of the rear panel. The gallery above shows the various external hardware aspects of the Drobo 5D.

Even though we didn't do a full-length teardown of the unit, the firmware file points to a Marvell ARMADA XP platform in the Drobo 5D. The Thunderbolt ports are obviously enabled by Intel DSL3510 controller.

In our initial setup, the Drobo 5D was loaded up with 5x 2TB drives and booted up after connecting over USB 3.0 to our DAS testbed. Windows Disk Management reported a 64TB physical disk which could be formatted in NTFS and used without hiccups on any other Windows system. Obviously, the 64TB capacity is virtual. In order to get a look at the actual usable capacity, and check up on the status of the disks in the unit, Drobo supplies the Drobo Dashboard, a tool for central management of all Drobo devices on the network / directly attached to the PC on which it is installed. The gallery below shows the various features of the Drobo Dashboard and the administration tasks that can be executed using it.

The Drobo Dashboard allows the Drobo 5D to be setup with single- or dual-disk redundancy, the former being the default. For people coming from a RAID background, this is similar to RAID-5 or RAID-6 (coming with similar requirements in terms of number of disks required). The Dashboard also presents the total usable capacity, based on the capacity of the disks in the unit. Other operational aspects are pretty much evident from the gallery pictures.

BeyondRAID is the data protection scheme used by Drobo. It is a patented proprietary scheme unlike traditional software RAID (mdadm etc.). ArsTechnica has a detailed look into the patent behind BeyondRAID for those interested in the technical details of how BeyondRAID works. One of the main disadvantages of this proprietary scheme is that it is impossible for third-party tools to reconstruct data in case of a faulty unit. Unless the user has a standing warranty coverage from Drobo, getting hold of another similar Drobo unit is the only way out.

One of the advantages of BeyondRAID over some of the other RAID implementations is that disks of varying sizes can be used. This is similar to mdadm-based implementations like Synology Hybrid RAID (SHR). In the case of single-disk redundancy, the largest capacity disk is completely used up for protection purposes. For dual-disk redundancy, the two largest disks are used up and don't contribute to the usable capacity.

We evaluated the Drobo 5D in both single-disk and dual-disk redundancy modes. In both cases, we also processed benchmarks in two modes - with a mSATA SSD in the hot-cache drive bay and without it. Five 2TB Toshiba enterprise SATA hard drives (MG03ACA2SATA) were used along with a Plextor 256GB M5M mSATA drive for benchmarking purposes. In the next section, we take a brief look at our testing setup, evaluation methodology and testing results.